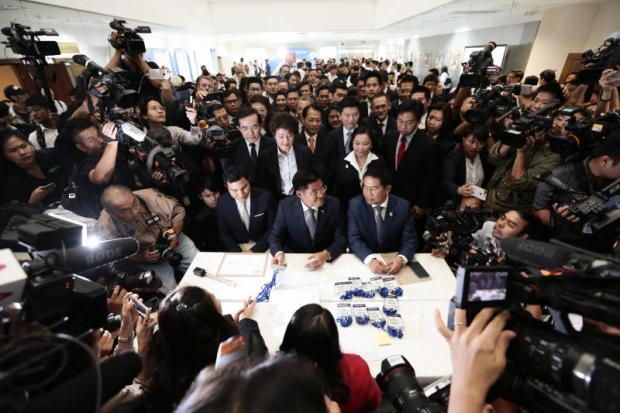 The Thai Raksa Chart Party submits the nomination of Princess Ubolratana as the party's prime ministerial candidate to the Election Commission on Friday.

The stock market rebounded on Friday from a morning plunge to close slightly in the red after announcements by political parties of their prime minister candidates, with Princess Ubolratana nominated as the Thai Raksa Chart Party's sole candidate.

The move was the focus of election rumours on Thursday and overnight, but no media outlet was bold enough to mention her name or the royal connection until the actual event at 9am yesterday.

Thai Raksa Chart is viewed as an offshoot of the main opposition Pheu Thai Party -- which is also linked to exiled former prime minister Thaksin Shinawatra -- and was established about a decade ago before rebranding and relaunching late last year.

After the market observed the two prime minister candidates of Thai Raksa Chart and Palang Pracharath Party and Thailand's political outlook, stocks associated with the Pheu Thai Party rose as investors reckoned that the party and its allies could set up a new government, said Tisco Securities deputy managing director Viwat Techapoonpol.

"Investors have a clearer view of local politics, so there is a positive short-term trading [sentiment], but external factors still remain a concern," Mr Viwat said.

Prinn Panitchpakdi, country head of CLSA Securities Thailand, said: "The prime minister candidates add colour to Thai politics. Market sentiment is positive as the general election is approaching, but we will have to assess whether Thailand will have political stability after the election."

Shares associated with, or with a legacy tied to, the Shinawatra family continued rallying from Thursday's surge, bucking a sell-off in the Stock Exchange of Thailand index.

Retail investors were net sellers of 1.5 billion baht, while foreign investors sold a net 647.4 million worth of shares.

Shares of SC Asset Corporation Plc (SC) rose by nearly 4% from Thursday's close to end the day at 3.16 baht per share, in turnover worth 398.5 million baht.

Shares of Advanced Info Service Plc (ADVANC), InTouch Holdings Plc (INTUCH) and Thaicom Plc (THCOM), all of which have a legacy tied to Thaksin, rallied by 2.5%, 2.7% and 6.8%, respectively.

After its acquisition by Singapore Telecommunications Ltd, InTouch changed its name from Shin Corp in 2011 as the group sought to distance itself from the Shinawatra family.