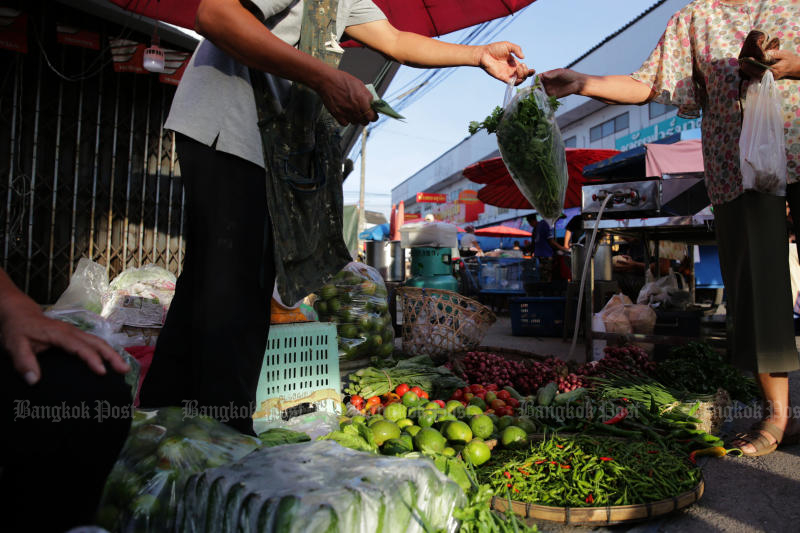 Falling food prices are a factor putting pressure on the Bank of Thailand and other Southeast Asian central banks on their policy rate decision. (Photo by Wichan Charoenkiatpakul)

Low inflation sweeping across Southeast Asia is here to stay, raising the odds some of the region’s biggest economies may reverse course on interest rates this year.

Food prices have been falling across the region, driving down inflation and pushing up real interest rates. Malaysia is already in deflation, while others like Thailand are seeing almost stagnant price growth.

While the three Southeast Asian central banks deciding rates this week -- Indonesia, the Philippines and Thailand -- are likely to stay on hold, they may signal some willingness to cut in coming months.

“With a more favourable external backdrop and more dovish turn from other central banks, we think the Philippines and Indonesia could afford to cut rates,” said Mohamed Faiz Nagutha, an economist at Bank of America Merrill Lynch in Singapore. “But they won’t be in a hurry given growth is generally still firm.” The case for further tightening in Thailand “is becoming less compelling,” he added.

In Malaysia, where the central bank has kept interest rates unchanged since a 25 basis-point hike in January 2018, calls for rate cuts are also getting louder. Data on March 22 will probably show consumer prices fell for a second month in February.

Indonesia and the Philippines both hiked rates by a total of 175 basis points last year to ward off inflation pressures and shield the economy against the emerging market rout. The Bank of Thailand delivered its first rate hike since 2011 in December.

This year the story is very different.

Currencies like the rupiah and peso have stabilised after the sell-off in 2018, inflation is at its lowest level in almost a decade in Indonesia and back in the target band in the Philippines. In Thailand, price growth remains below the central bank’s goal.

In the Philippines, the central bank also has a new governor, Benjamin Diokno, a former budget minister who’s said the slowdown in inflation provides room to ease monetary policy.

The weak inflation backdrop is tricky for policy makers in a region vulnerable to food and utility price swings. An expected El Nino dry spell this year could stunt harvests and boost food inflation, while global fuel prices could also creep up, keeping central banks on guard.

Even so inflation is expected “to remain unconcerning in the medium term,” said Chidu Narayanan, Asia economist at Standard Chartered Plc in Singapore.

With Indonesia, Thailand and the Philippines all holding elections this year, authorities are also trying their best to keep costs under control, another reason inflation is set to remain subdued. Indonesia has capped fuel price increases, while the Philippines has eased import restrictions on rice and fish.

For Indonesia, much will depend on the currency’s outlook. Policy makers are likely to remain “cautious” when it comes to rate moves and wait “until the coast clears for the rupiah to be more stable or even appreciate,” said Euben Paracuelles, an economist at Nomura Holdings Inc in Singapore.

“As for Thailand, monetary conditions are the tightest in the region by our estimates, due to a combination of high real rates as a result of low inflation, and the baht’s appreciation,” he said. “That means it is difficult for the Bank of Thailand to follow up with another rate hike and indeed we expect it to stay on hold throughout this year.”