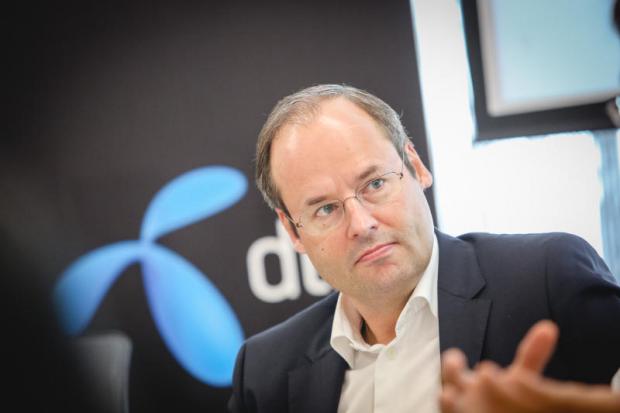 Mr Norling says DTAC's major shareholder, Telenor, has a long-term commitment to Thailand, the group's biggest market in Asia and No.2 overall after Norway.

After focusing solely on mobile for many years, the head of Total Access Communication (DTAC) says the company is now looking at new areas.

But Mr Norling insisted that the mobile business "remains in focus" at DTAC for now.

Among the three main telecom operators, DTAC for years has been the most narrowly focused. While True Corporation, and to a lesser extent AIS, pursued the idea of convergence and different technologies, DTAC concentrated on mobile.

Industry analysts and securities firms say the tender offer for Jasmine International Plc by its largest shareholder could pave the way for JAS to sell its fixed-line broadband business to a prospective mobile firm -- either Advanced Info Service (AIS) or DTAC.

Pete Bodharamik, chief executive and biggest shareholder of JAS, stunned the market on Monday by announcing a tender offer for 4.09 billion shares and 2.73 billion units of warrant-3 (W3) that he does not already own in a deal worth up to 40 billion baht.

The fixed-line broadband service provider's boss said he would buy JAS shares at a price of 7.25 baht each and JAS W3 units at 3.68 baht each. Both closed at the tender offer prices in yesterday's trading.

Jasmine Telecom Systems Plc (JTS) yesterday asked the Stock Exchange of Thailand to halt its share trading after the shareholding of Mr Pete in the parent firm exceeded 50% -- the level that triggers a tender offer for JTS's remaining shares under the chain principle rule, JTS said in a filing.

"To ensure that investors will be informed of the details regarding the offerer's tender offer plan for the entire securities of JTS made by the offeror and to prevent any misunderstanding on the facts, JTS would like to request the SET to temporarily suspend trading of JTS's securities until it is notified of any information by the offerer," the company said.

Mr Norling said Thais, including DTAC customers, use their phones about six hours a day, mainly for streaming video and music. People spent 3.1 hours a day on mobile phones in 2014 and only 10 minutes a day seven years ago.

Mr Norling said mobile data traffic in Thailand has seen growth of at least 70% this year, driven by the availability of fourth-generation (4G) wireless broadband commercial service nationwide and the proliferation of social networking users.

As of June 30, DTAC had 3.5 million 4G subscribers. The company expects its 4G customer base to reach 6 million this year.

Mr Norling reiterated that Telenor, the company's major shareholder, has a long-term commitment to DTAC and strong confidence in the future growth of the Thai telecom industry.

"DTAC contributed the second-largest proportion of revenue to Telenor out of 13 countries worldwide in which it has operations, after only Telenor's mobile operation in Norway," he said.

The Thai mobile operating unit is a very important market for Telenor, he said, being the biggest market out of six countries in Asia. (The others are Myanmar, Pakistan, Bangladesh, Malaysia and India.)

DTAC shares closed yesterday on the Stock Exchange of Thailand at 32 baht, down two baht, in heavy trade worth 1.02 billion baht.