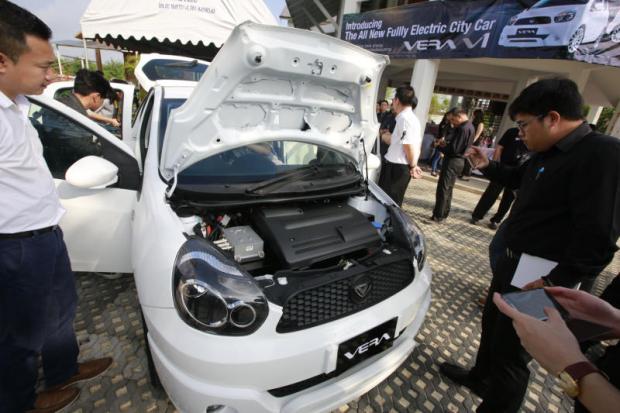 Thailand's first electric car brand has made its debut amid scepticism from an industry expert about its commercial viability.

Vera Automotive, founded on Oct 7, 2015 by five Thai engineers from King Mongkut's Institute of Technology Ladkrabang (KMITL), on Friday introduced the Vera V1 battery electric vehicle (BEV), powered with a battery capacity of 22 kilowatts per hour, which can be registered with the Land Transport Department as a passenger car.

The maximum speed of the Vera V1 is up to 105 kilometres an hour. It can run up to 180km per charge, which takes six hours to complete.

Co-founder Wanchai Meesiri said all Vera cars are designed by Thai engineers under the Thai brand, but the company has hired the Chinese carmaker Geely Automotive to produce the BEVs. The company imports the cars as completely built-up (CBU) vehicles to Thailand.

Vera V1 is subject to all related taxes similar to other imported vehicles, including an 80% import duty, a 10% excise tax for all types of electric vehicles, a 10% interior tax and a 7% value-added tax.

Yossapong Laoonual, chairman of the Electric Vehicle Association of Thailand (Evat), said it's a good sign for the country to create its own electric vehicles, even if the vehicles are made by foreign firms.

A retail price below 1 million baht is affordable for Thai customers, he said.

But Asst Prof Yossapong warned that any startup that is selling electric vehicles has to plan its marketing strategy carefully, as the Thai car market has many dimensions for consumers to consider, including brand, service and trust.

"Electric vehicles for Thailand remain very new, and they're unlikely to become popular or proliferate in the short term," he said. "If you are a new company or brand, the best solution is to sell electric vehicles as a fleet to other agencies, which are easier to provide after-sales services for."

Mr Wanchai said the primary purpose for establishing Vera Automotive is to make Thai BEVs for the local market.

He expects to sell about 100 units of Vera this year.

"We hope in the foreseeable future the government will come up with clearer policies and supporting measures once the number of electric vehicles increases," Mr Werachet said.

He said the firm will provide after-sales services at its head office on Ladprakao Road.