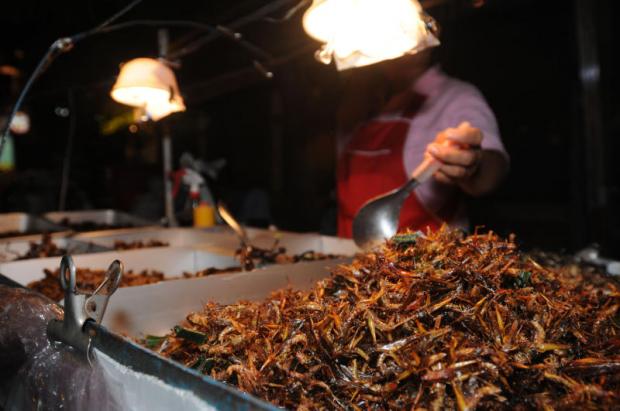 Deep-fried insects are a popular treat at the Klong Toey Market in Bangkok. Photo: Pornprom Satrabhaya

The first time I ate an insect was when I was young and playing in Roi Et, the northeastern province where my mother grew up. It was a fried grasshopper. I recall the taste was not bad, but after many bug-free years in Bangkok, I wasn't sure I wanted to get back on the insect wagon.

The North and the Northeast of Thailand are the hotspots for insect-eating culture in Asia, a growing industry that its advocates say could save the world from hunger one day.

Seasoned and fried grasshoppers, crickets and woodworms are staples in Isan, where spicy ant egg salad is the favourite. Steamed glutinous rice with ant eggs, stink bugs roasted with lemon leaves, crispy white crickets, larvae and coconut worms are all available in Vietnam. In China, roasted bee larvae are a delicacy while roasted water bug is a common street food. Japan also has a rich history of eating inago (fried grasshopper), sangi (fried silk moth pupae) and zaza-mushi (a type of larvae).

Now a new breed of insect evangelists are telling us that not only are insects tasty, but the more bugs we eat, the better off out planet will be.

"Our enemy for the environment, at this moment, is beef. A cow drinks 15,000 litres of water for one kilogramme of meat and, according to UN Food and Agriculture Organization (FAO), cattle farming actually creates more pollution than traffic," said Massimo Reverberi, the founder the two-year-old Bangkok-based cricket pasta maker Bugsolutely.

An FAO report in 2013 pointed out that "insects are a highly nutritious and healthy food source with high fat, protein, vitamins, fibre and mineral content", and are part of the regular diet of more than 2 billion people.

In addition to being protein-rich, he said, insects also contain high quantities of iron, potassium and calcium. In 100 grammes of dried or powdered cricket, 65% is protein and there is also abundant fibre and healthy fats such as Omega 3 and Omega 6. 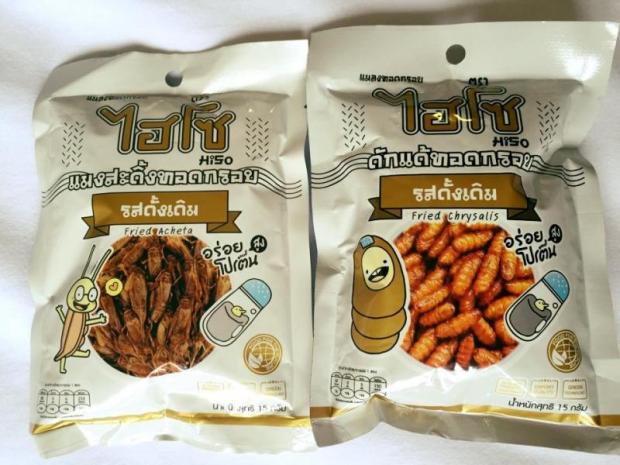 But what about the taste?

"Something that most people do not think of is, they taste good," said Mr Reverberi, while conceding that much depends on individual preferences. "The fried insects you buy on the street, some people like them and some don't, and there are very few recipes. But if you have a chef cooking insects, you can have amazing dishes."

In the past few years, edible insect startups have popped up in Western countries to supply the growing craze for grub. Arielle Zuckerberg, the sister of Facebook CEO Mark Zuckerberg, in February 2016 invested in Tiny Farms, which is working on technology to reduce the cost of insect protein production. Exo, a company that sells cricket-flour protein bars, raised US$5.2 million in funding in the same year.

Some famously trendy restaurants have all tried their hand at insect menus. They include Don Bugito in San Francisco, Brooklyn Kitchen in New York, the Michelin-starred Aphrodite in Nice, and Michelin-starred Noma in Denmark. London in 2015 welcomed the all-insect restaurant Grub Kitchen. Even the French culinary arts school Le Cordon Bleu held a seminar on "Edible Insects in a Gastronomic Context" in Bangkok in 2015.

In New York, you can buy an Oreo Mud Pie milkshake, made with Peruvian chocolate cricket powder, at Wayback Burgers, or chauplines, which are tacos made with grasshoppers, at Toloache.

About 25 startups that sell insects as food have been launched in North America, helped by philanthropic organisations including the Gates Foundation, and the UN, according to entomologist Aaron Dossey, founder of All Things Bugs, a supplier of cricket powder.

In Southeast Asia, a dozen insect business owners, including Bugsolutely, met in Bangkok in 2016 to create the Asean Food and Feed Insects Association to define regulatory requirements at the national and Asean levels.

"Some people think they have to eat insects because it is sustainable and because it is healthy, like it is a duty, but this is because they don't know the taste, and this is the wrong approach. Mealworm flour from Chiang Mai tastes a lot like chestnut flour and has an amazing taste," Mr Reverberi said.

He cites surveys showing that 70-80% of Europeans will refuse to eat a whole insect, but if you dry it into a powder and mix it into pasta or cookies, more than half will try the product. 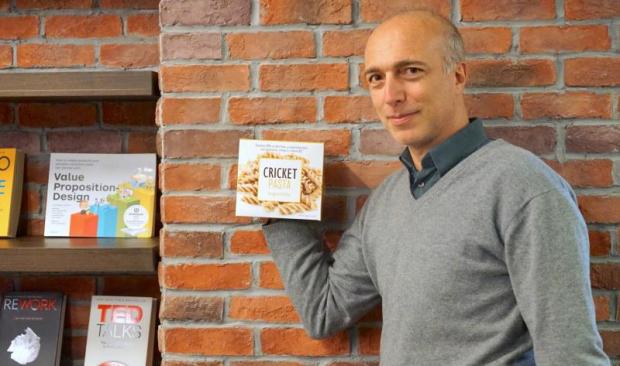 "In Asia it's different. Here, for example, Bangkok residents don't usually eat insects because they believe it's an old farmers' tradition, so the barrier is partly social status," he said.

"I don't push cricket pasta to retailers here because I don't think Thai people will understand, while people in the countryside will ask, 'What are you doing with our traditional fried cricket?'

"In the West, the media coverage has been huge and people know about the nutritional properties [of insects]," he continued. "HiSo in Thailand is doing a good job in paving the way for everyone here because by making old snacks modern and packaging fried street food for supermarkets, they are changing people's perceptions."

HiSo offers fried crickets and worms in plain salt, cheese, seaweed and barbecue flavours. "I want to elevate its level from what is considered street food into something safe and modern," HiSo founder Panitan Tongsiri told Reuters in 2015.

Tharatorn Teerakunded, HiSo's marketing manager, told Asia Focus that insect snacks are popular in bars and nightspots in the North and Northeast, while the bestsellers in Bangkok are fried chrysalis from silkworms as most people still shun whole insects.

"The image of the chrysalis is more manageable for people in Bangkok but most are still unsure about a whole fried acheta (house cricket) because they can still see the legs and everything," he said.

Analysts at New Nutrition Business projected in 2014 that the edible-insect industry would be worth $360 million by 2019. Persistence Market Research (PMR) expects the global edible insect market to expand at a compound annual growth rate (CAGR) of 6.1% from 2015-24, to reach $723 million by the end of 2024.

Insects can also be used to feed other animals and can help the environment, notes Anne Deguerry, ethical and public relations director at Entofood, a Kuala Lumpur-based producer of animal proteins. Black soldier flies in particular have been studied for a long time because they are economically profitable.

"The amount of organic waste in a city is so huge ... that we are able to use organic waste and process it as a feedstuff for farming insects, and the larvae we process into insect protein can be used as fish meal," she told Asia Focus.

Bart Verstappen of the Swiss Federal Institute of Aquatic Science and Technology agrees that the organic waste that now goes into urban landfills could be put to far better use to breed insects for feed.

"The greenhouse emissions from black soldier flies are very small, so in general the advantage of insects as feed is the potential to reduce the pressure on our environment," he told Asia Focus.

Large-scale commercialisation is still a way off, he added. "It will need an industrial approach with capital investment on a scale that will trigger all kinds of issues and that is still in development, but it is moving very fast."

However, farmers can easily breed fly larvae every day to feed fish as it does not require a large space. And even though it is still cheaper to buy commercial feed, farmers can add value when they sell the fish.

"Using black soldier flies as feed is the focus for carnivorous species such as salmon, which is a high-value market," said Ms Deguerry. "It depends on the end consumer. Some are very interested in sustainability and they want organic products such as fish that have been raised with environmentally friendly feed." 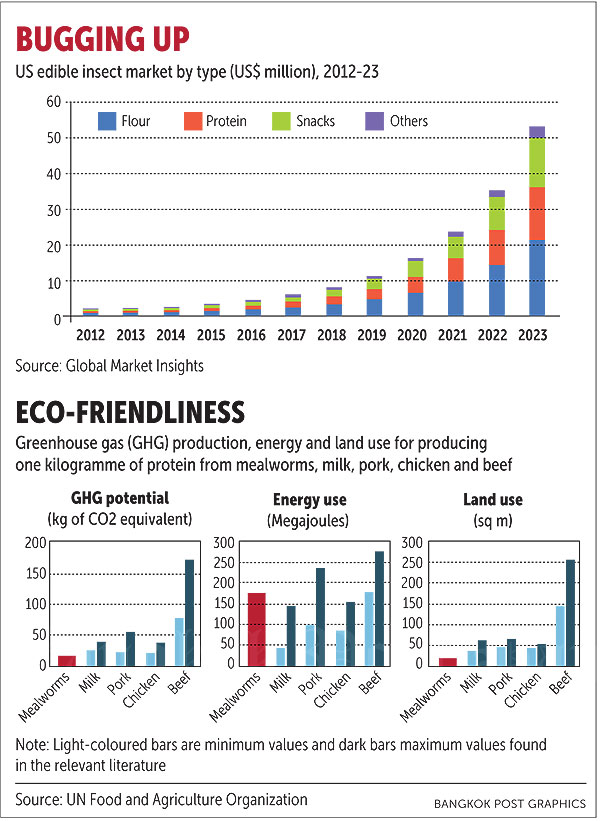