Arif Ali has not had a drop of piped water in the last six weeks. 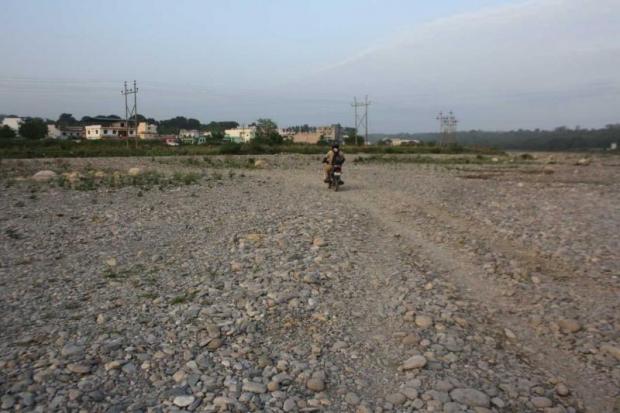 A man drives his motorcycle along the dry bed of the Tons River near Dehradun in Uttarakhand. The Tons normally flows through the Garhwal region straddling Uttarakhand and Himachal Pradesh states in northern India. Photo: Narendra Kaushik

The 23-year-old resident of Sangam Vihar, one of the largest of the "unauthorised colonies" that exist beyond the reach of urban planning in South Delhi, drives 58 kilometres every day to fetch water for his nine-member family -- his wife, son, three brothers and two sets of parents.

"We have had no piped water for the last 45 days. I do two rounds in Mithapur (in northeast Delhi) every day to collect water for my family and my shop," says Mr Ali.

Mr Ali is not alone. Almost all of the 1.5 million people who inhabit Sangam Vihar, an illegal settlement that has grown up in a designated forest area, share his agony. On June 15, the brother of a local councillor was shot dead in a dispute over the laying of a water pipeline.

Sangam Vihar has only three government bore wells, according to Mr Ali. Unlike in other parts of Delhi, the bore wells in Sangam Vihar are not operated by government staff and civic agencies have not laid pipes to deliver water to residents.

More often than not, the wells are under the control of "water mafias" that have laid their own pipelines in the streets and will violently resist attempts to challenge their authority. According to Delhi Police records, at least five such gangs operate in the area.

Not only are these gangs prepared to fight, extort and kill over water, but also they overcharge residents, who are too fearful to complain.

"The government has fixed a fee of 50 rupees (24 baht) per month for water supply. But the bore well controller charges between 200 and 300 rupees per month," says Mr Ali. "We have to pay the charges even without getting water."

In addition to the councillor's brother who was slain in Sangam Vihar, two people were killed in Wazirabad in north Delhi in clashes over water recently. Wazirabad is located a stone's throw from the Yamuna, the river that Delhi has over the years turned into a massive sewage drain.

A recent government report said that Delhi is among 21 Indian cities (Bengaluru and Hyderabad are also on the list) that will run out of groundwater in 2020, affecting about 100 million people.

The 180-page Composite Water Management Index (CWMI) report, the first of its kind, was released on June 14 by Union Minister for Water Resources Nitin Gadkari and the National Institution for Transforming India (Niti).

The report says 70% of the available water in India is contaminated and 200,000 people die every year as a result of inadequate access to safe water. It forecasts that demand for water will reach 1.5 trillion cubic metres by 2030, compared with the current 740 billion.

Some 600 million Indians, it adds, face high to extreme water stress and 84 million rural households do not have access to piped water. It identifies, among others, Jharkhand, Haryana, Uttar Pradesh and Bihar as states that have failed at water management.

India gets most of its water from rains and snowfall. But out of the 4 trillion cubic metres annually from rain and snowfall, only 18.7 billion cu m has potential to be used as water resources. More than 93% of the rainwater is lost due evapotranspiration and topographical constraints. As well, rainfall is not uniform across India with western parts of the country getting less rain every year between June and September. Snowfall is diminishing as well.

The famed hill station of Shimla, for instance, had only about 7 centimetres of snow last winter (the record was 96.cm in 2004), so it is no wonder that it faced a major water crisis last month. The town meant to house only 24,000 people is bursting at the seams. Sanjay Austa, a journalist-turned-hotelier, regrets that Shimla residents do not engage in water management and are solely dependent on the government for water supply.

Apart from Delhi and Shimla, Bengaluru, the country's tech hub and home to 12 million people, is under severe strain as groundwater has reached zero at many places. The city, which had 262 lakes in 1960, now only has water in only 10 such bodies.

Untreated sewage makes the water problem almost insurmountable. According to some estimates, only about 37% of the 62 billion litres per day of sewage produced by Indian cities gets treated. The rest makes it into rivers, streams, lakes and ponds. This is why about half of the country's 445 rivers are polluted and their water is not fit for consumption without treatment.

Himanshu Thakkar, head of the South Asia Network on Dams, Rivers and People (SANDRP) blames the government for mismanagement of water. He fears the water problem is going to get worse because cities are not looking for solutions themselves.

"Delhi gets water from the Bhakhra, Yamuna and Ganga (rivers). Mumbai gets it from a dam in Thane and other places. Bengaluru lifts it from the Cauvery River. These are lazy solutions. Mumbai gets 2,400 millimetres of rain per year. Why can it not harvest that?" Mr Thakkar asks.

He faults governments on two counts -- the centre and states have no urban water policy and no solution for the increasing problems posed by sewage. "We treat only a fraction of the sewage," he says.

States like Haryana and Punjab, he says, should also be talking to their farmers about cropping patterns. Though groundwater in the two northern states has fallen way below adequate levels (by 60 to 100 metres in some cases), farmers continue to grow rice, a water-guzzling crop.

"Our national hydrology (strategy) is based on groundwater and not surface water. Our water management is a total mess," he laments.

Mr Misra is angry that Indian cities prefer to fetch water from long distances instead of focusing on recharging the ground closer by. "Delhi gets water from 200 kilometres away and then wastes 45% to 50% of it in distribution. The Delhi Water Board claims it provides 210 litres of water per person per day. Does a person in Sangam Vihar get this much?" he asks.

In Shimla, meanwhile, he faults civic authorities for not having rationed water in order to provide better management. Indian states are involved in seven major water disputes among themselves, which further exacerbates the problem for many residents.