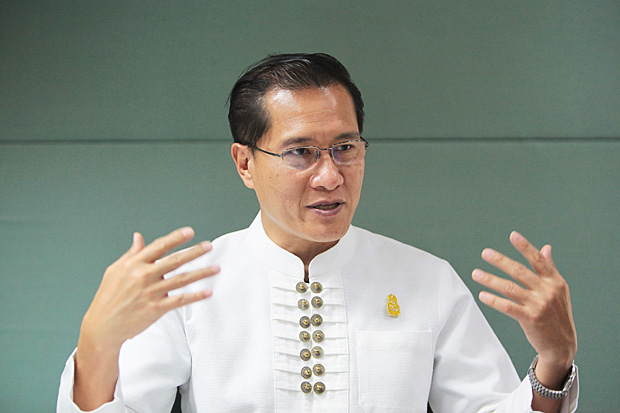 One of Mr Weerasak’s first initiatives was to get the government thinking about the environmental impact of tourist traffic. Photo: Tawatchai Kemgumnerd

For the tourism and sports minister, the first priority is transforming Thailand’s tourist spots into higher-quality destinations.

“I have stated my mission to tourism stakeholders since the first day I took office, that I would not look at the number of tourist arrivals," Weerasak Kowsurat says. "Instead, I would focus on quality and changing the tourism fundamentals.”

Mr Weerasak is breaking with tradition. In the past 16 years, the Tourism and Sports Ministry has focused on expanding the number of international tourist arrivals and increasing tourism revenue accordingly.

Last year, the number of foreign tourists rose to 35 million, generating tourism revenue of 2 trillion baht — accounting for roughly 20% of the country’s GDP.

“I'm not focusing on either numbers or income," Mr Weerasak says. "I want to change tourism fundamentals and improve the entire industry on both a macro and micro scale.”

He stressed that tourism is no longer playing a role as an economic driver, but should instead be used as a tool to reduce the income gap between urban and rural residents.

Mr Weerasak made his first move by persuading government officials to think about the environmental impact of heavy tourist traffic at major destinations.

Authorities were asked to realise how the environment would improve if they were able to reduce waste, bring their own bottle to fill with drinking water and so on.

At the same time, he began to float the idea of limiting the number of visitors at some popular national parks and closing them for a period of time to rejuvenate.

More important, the ministry aimed to crack down on illegal operators and inappropriate businesses in a soft-power manner, beginning with Koh Phi Phi in the southern region in mid-2017.

Mr Weerasak and related authorities approached properties and knocked on doors, asking them to improve facilities and enhance overall service quality. Public areas such as walking paths and beach fronts have been cleaned up, while some local gangsters have faded away.

“I visited them and urged them to listen to three things: listen to nature, listen to local people and listen to money, respectively," Mr Weerasak says. "Money or business is the last to consider. No one's been put in jail under my operation. In turn, they feel happy with my effort."

On a bigger scale, the ministry moved to brush up the prolonged Thailand Riviera project with a new focus on local communities, replacing beaches in the blueprint.

For the demand side, the ministry is taking concerns about over-tourism seriously, as the country is expected to welcome up to 38 million foreign tourists in 2018, up from 35 million last year.

“Having 35 million foreign tourists is equal to half the Thai population,” Mr Weerasak points out.

The influx of tourists has caused many problems with waste, water pollution, safety and congestion. Some popular areas such as Koh Phi Phi and the Similan Islands are often overcrowded, especially during high season. Kiriwong Village in Nakhon Sri Thammarat is another case in which locals have complained about an excess of visitors.

“Tourists come to Thailand and visit only 20 cities," Mr Weerasak says. "How would that turn out over 30 years?”

To reduce congestion, the ministry pledged to promote destinations in second-tier provinces. Under the plan, local people and small businesses can share in the benefits of tourism, while tourists can enjoy travel and Thai hospitality.

This year, safety and security became big issues after the boat accident off Phuket that killed 47 Chinese tourists. The government is trying to restore the confidence of foreigner visitors, Mr Weerasak says.

He says the security issue sometimes causes inconvenience for business operators, as their default mode is to want large numbers of tourists, but the government has to look at the other side.

As minister, Mr Weerasak is also charged with supporting sport. He hopes to make people understand the “spirit of sport”, including sportsmanship and forgiveness.

“The ministry is not working for a medal at this time, but mainly encouraging people to have good health," he says. "I believe that when people love sport, we should be professional players in the future.”

In fact, many young Thais have dedicated themselves to sport, bagging top prizes in cycling, badminton, golf, volleyball, archery and shooting.

Asked what he would like to do in the remaining months before the general election, Mr Weerasak says overhauling the ministry is paramount. The plan includes the separation of sports and tourism. If it happens, then each segment can work more efficiently.

For the minister, being a disciplined and open-minded person is a key philosophy. He strives to listen to other people, even if they have a different opinion.

Mr Weerasak's day begins before 6am every morning and generally ends after midnight. But before going to work and bed, he must spend time with family.

Mr Weerasak is consuming information and news and analysis all by himself. He says he can't be an effective minister unless he's able to digest data and think about alternative choices.

“When an issue arises, I need to have many alternative choices to make as soon as possible," he says. "One problem can have many options, and it should come with a first, second and third scenario."

In his free time he prefers exercise for refreshment, and he doesn't spend much time travelling.

He ends on a thoughtful note for the industry, saying information is the most important thing that stakeholders need to concern themselves with in decision-making.

Key statistics for the tourism industry include the global economic situation, new trends, currency fluctuations and political conflicts, he says.