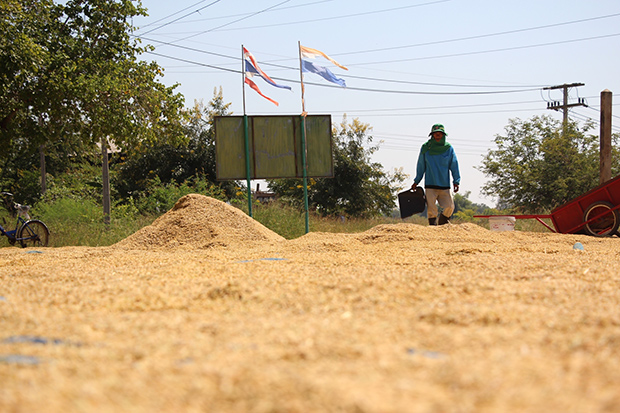 A farmer in Muang district in Chayaphum province dries his rice outdoor to reduce moisture. (Photo by Makkawan Wannakul)

Farmers are putting up their guard against rice thefts after several cases have been reported this year in the wake of high prices.

Noosin Damri, a farmer in Warin Chamrap district of Ubon Ratchathani province, on Monday lodged a complaint at the Huay Khayung police station. She claimed 16 bags of Hom Mali rice paddy weighing about 450kg had been stolen from her granary. (continues below) 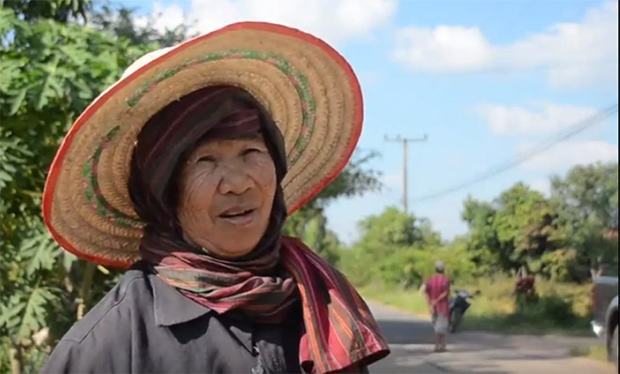 Noosin Damri, a farmer in Ubon Ratchathani province, is a victim of rice thefts this year. (Photo by Nila Singkhiri)

She told police that she had heard the sound of a motorcycle leaving her house around 1.30am and suspected it could be the vehicle used by the thieves.

The loss was estimated at 6,000 baht or more based on the current prices of between 13,800 and 17,500 baht per tonne, according to a recent joint survey by the Commerce Ministry and the Agriculture and Cooperatives Ministry.

"That paddy won't make them rich. What they did to me was a sin," Ms Noosin said.

Huay Khayung police found only two pairs of sneakers and motorcycle tyre traces near her barn.

This year is a good year for farmers. Paddy prices have fetched high prices due to drought in the lower northeastern provinces which diminishes supply while the demand remains high, the Office of Agriculture Economics has said.

The good news stokes worries about rice thefts. Officials in Chaiyaphum, Amnat Charoen, Roi Et and Nong Khai provinces, as well as those in other areas, have urged farmers to be vigilant when drying their produce, a common practice aimed at fetching better prices when the grain is sold to rice mills. Rice paddy with lower moisture content is normally sold for higher prices. (continued below) 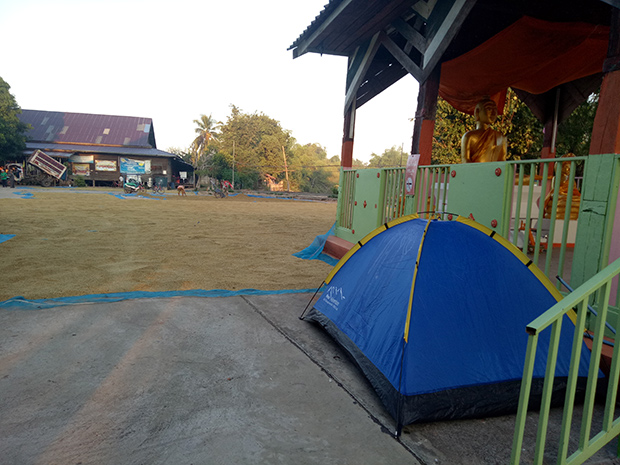 A tent for farmers to guard their rice is seen near a village ground in Muang district of Chayaphum province. (Photo by Makkawan Wannakul)

"We volunteer to guard our rice around the clock," Fok Promyaem, a farmer of tambon Cheelong, said.

Samran Boonpriem, who has rice fields at Ban Khai in tambon Ban Khai, said her family, including her husband and sons, stayed outdoor near the village ground at night to make sure the family's paddy was safe.

"Sometimes, we can hardly sleep. Whenever we hear vehicles coming nearby, we wake up and turn on the flashlight," she said.

Chaiyaphum police chief Pol Maj Gen Sompot Khomprang said all police stations in the provinces are working with farmers by stepping up their patrol duty, targeting strangers in villages who might be rice thieves.