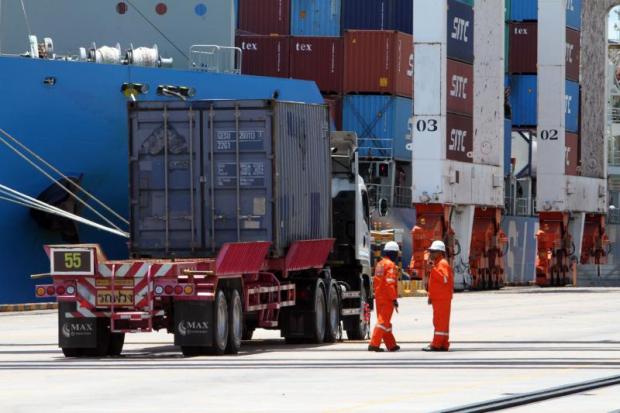 Laem Chabang port plans to kick off a transformation process to become a smart port in 2020, starting from operations management of truck queuing via digital solutions, to lessening traffic congestion inside and around the port.

Apart from improving competitiveness in the Eastern Economic Corridor (EEC), a smart port at Laem Chabang is expected to generate at least 1.7 billion baht annually for the economy after 2020.

The latest measure comes after yesterday's signing ceremony on a cooperative agreement between the Digital Economy Promotion Agency (Depa) and the Port Authority of Thailand (PAT). The contract aims to develop Laem Chabang port into a smart port driven by innovative tech solutions.

Digital Economy and Society Minister Pichet Durongkaveroj said the smart port will be set up under a collaboration between Depa and the private sector, with each party set to spend 50 million baht for the initial budget.

The smart port development will be adopted for truck queuing procedures this year to ease traffic during routine operations.

The truck queuing solution covers tracking and communications systems for truck management, as well as the payment system for service fees to use the digital platform.

Mr Pichet said the smart port will need continuous development through the years. The next addition will be a single-terminal operator queuing system that will connect with transport from the railway system.

"Developing a smart port in Laem Chabang directly supports what is called multimodal transport serving the EEC project, which is specifically for logistics," Mr Pichet said.

In addition, the smart port development will connect the vessel schedule system with the National Single Window (NSW) under the Customs Department to boost service quality and reduce operating costs and opportunity losses in the logistics business.

Montree Lergchumniel, acting director-general of the PAT, said the number of containers loaded at Laem Chabang has been increasing year-on-year. There are 7 million containers of 20-foot equivalent units per year on average, and 5 million trucks entering the port per year.

"The development of the Laem Chabang project is expected to initiate smart ports for the first time in Thailand and will improve the data collection system of imports and exports in multimodal transport into a single point of management," Mr Montree said.

Depa president Nattapon Nimmandpatcharin said Thailand has been implementing the five-year roadmap for smart cities. The roadmap includes the development of seven smart cities, including three in the EEC representing Rayong, Chon Buri, and Chachoengsao.

In addition, the government expects to see the development of precursors to smart cities in all other provinces. Depa was assigned as a major agency to initiate the existing smart city project under the government's digital economy roadmap by providing high-speed internet infrastructure and free WiFi in areas of smart city development.

The government is shaping the existing smart city development project to ensure greater strategic efficiency for the seven targeted smart cities, serve the diverse requirements of each area and eliminate burdens throughout development.