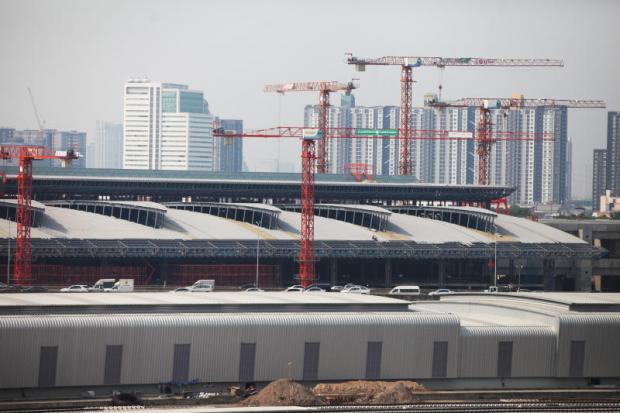 The under-construction central station in Bang Sue district, a key big-ticket project, is expected to start service in 2021.

The Public Debt Management Office (PDMO) is keen to defend the cap of 60% on the ratio of public debt to GDP, saying the limit is in line with international standards and provides sufficient fiscal space to cushion against crises and drive growth.

Jindarat Viriyataveekul, the PDMO's deputy spokeswoman, referred to the World Bank's earlier research that public debt should not exceed 77% of GDP in developed countries and 60% in developing nations.

Her remarks came after former finance minister Sommai Phasee said the current framework limiting public debt to 60% of GDP is outdated and the proper level should be 50%.

Thailand's public debt hit a high of 59% of GDP in 2000, given the burden that financial institutions shouldered through the Financial Institutions Development Fund and the economic downturn at the time.

The increasing ratio of public debt to GDP stems from the government's additional borrowing to finance big-ticket infrastructure development, particularly for transport.

According to PDMO data, public debt amounted to 6.81 trillion baht, representing 41.8% of GDP, as of November last year.

Mrs Jindarat said the 60% threshold is required by the Fiscal Responsibility Act, not the PDMO's regulations.

It's still necessary for the government to implement a loosen fiscal policy to develop economic and social infrastructure, sharpen the country's competitive edge and provide fiscal flexibility to cushion against global economic uncertainties, she said.

Under the act, the government's debt liabilities are capped at 35% of estimated revenue for that fiscal year, and the government must allocate 2.5-3.5% of annual budget for principal debt repayment.

Moreover, payment liabilities incurred from pork-barrel spending are capped at 30% of annual budget expenditure, while foreign-denominated public debt must not exceed 10% of the overall public debt and 5% of exports and services.