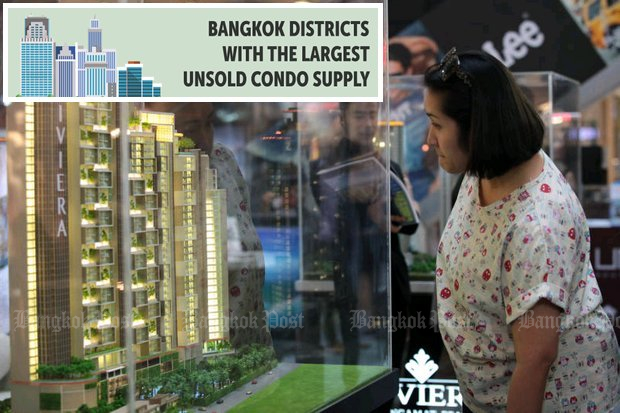 A woman checks out a condominium project. The five top locals for 'unsold condo units' are listed below.

Thong Lor, Ramkhamhaeng, Charoen Nakhon, Sam Yan and Talat Phlu will be the top five locations for new condo launches this year despite concern over the property market outlook.

Phattarachai Taweewong, associate director of property consultant Colliers International Thailand's research department, said those locations have strong demand and supply launched in previous years did not accumulate into a glut.

"Some of these locations saw a high absorption rate last year, with more than four units purchased per month," he said.

"Some did not have new supply launched in recent years, while others have lower land costs, feasible for development of affordable units."

From Thong Lor extending to the Ekamai area, there were 3,300 condo units remaining unsold as of the end of 2018.

Despite that large amount, new supply from at least three projects will be launched this year. 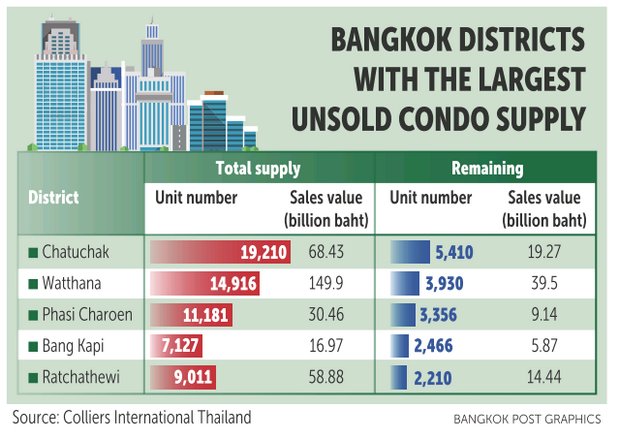 Last year the sales rate of new condos launched in locations from Sukhumvit Soi 55 to 63 was more than 51%.

Bestsellers were units priced over 250,000 baht per square metre as demand for Thong Lor and Ekkamai condo was not price-sensitive, he said.

The second most popular location for new condo supply this year will be locations on Rama IX to Ramkhamhaeng roads as land costs remain low compared to other emerging locations.

Mr Phattarachai said condo prices in Ramkhamhaeng should be lower than 100,000 baht per sq m to have a good sales rate.

"The key driver is the Orange Line between Thailand Cultural Centre and Min Buri, with construction progress of 30% so far," he said.

"It will pass locations along Rama IX Road and Ramkhamhaeng, one of the most crowded residential areas."

He said locations on Charoen Nakhon Road became hot since luxury shopping complex Iconsiam opened last November. Prices of new condo supply being launched in the riverside area will range from 150,000 to 180,000 baht per sq m.

Another location projected to see a large amount of new condo supply this year is the Sam Yan area on Rama IV Road, with at least four projects including freehold and leasehold units.

The area around Talat Phlu BTS station is expected to have at least five projects with a total of 6,000 units scheduled to launch in the second half.

"Developers should set a suitable selling price for each location as demand in some areas cannot afford too high a price," said Mr Phattarachai.

"Otherwise, they will need to offer a discount later on if a project has a very low sales rate a year after the launch."

In locations along Charan Sanitwong and Phetkasem roads, condo units priced higher than 100,000 baht per sq m are difficult to sell as demand for these locations is price-sensitive, he said.

"All of these locations saw an absorption rate of between 0.9 to two units per month," he said.

"The sluggish sales in some locations was caused by too much supply, while they were incorrectly priced at other locations."

According to Colliers, the number of new condo supply launched in Bangkok in the first quarter this year totalled 8,443 units, down 60% and 40% from the fourth and first quarters last year, respectively.