The new lending curbs and bearish housing demand has affected listed developers' confidence in the first quarter of 2019. 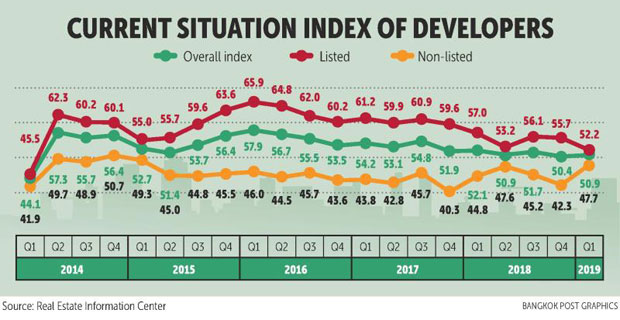 According to a recent survey by the Real Estate Information Center (REIC), the listed developers' current sentiment index dropped to 52.2, a new low in 20 quarters since the first quarter of 2014. It fell from 55.7 in the fourth quarter of last year.

The decrease was attributed to escalating concern about the impact of the new loan-to-value (LTV) limits applied on April 1, said Vichai Viratkapan, acting director-general of REIC.

"Developers are worried that homebuyers will be unable to get the level of credit they need for a mortgage," he said.

"The LTV limits also cover co-borrowers, reducing the purchasing power of some buyers."

Mr Vichai said the LTV limits will make housing transfers in the second quarter slow down. The actual impact on the housing market will be more well known by the third and fourth quarters this year.

"A drop in housing sales in the second half would suggest homebuyers are concerned," he said.

"REIC will use figures in the fourth quarter this year as a benchmark, comparing them with a five-year average in the same quarter."

Nonetheless, the non-listed developers' sentiment index rose to 47.7 from 42.3.

A median value is 50. If the index is higher than 50, it means developers are confident about the property market, while lower than 50 means they are pessimistic.

According to REIC, the expectations index of listed developers in the first quarter of 2019 declined to 59.9 from 65.4 in the fourth quarter last year. Key concerns were declining revenue, profit and sales.

"These concerns will have an impact on their [listed developers] investment decisions and employment," he said.

Though the expectations index of non-listed firms rose to 47.7, it remained at a low level and lower than the median value.

Developers remained concerned about sales and revenue, which decreased recently.

"Overall housing demand remains weak because of many factors. Developers should adjust their strategies by revising new launches and being more cautious about investment expansion," said Mr Vichai.