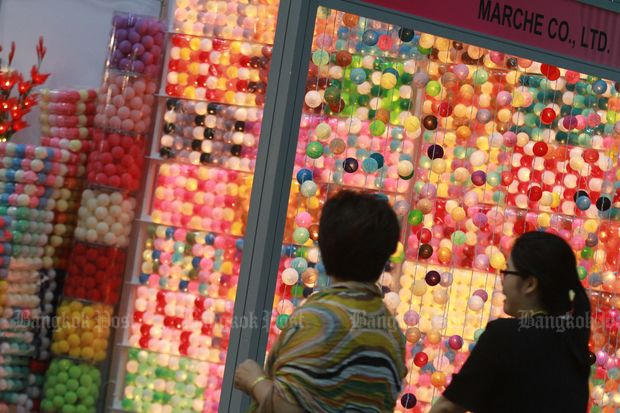 Visitors check out goods on display at the Style Bangkok trade fair, which focuses on Thai lifestyle products based on a combined cencept of creativity, innovation and origin at Bitec Bang Na on Thursday. The fair runs until Sunday. (Photo by Somchai Poomlard)

The political gridlock is prompting the government to evaluate measures to shore up the country’s slowing growth.

Finance Minister Apisak Tantivorawong on Friday said the ministry is considering steps to inject 20 billion baht of stimulus into the economy. Growth may slow to the low 3% range in the first and second quarters, he told reporters.

"We want the measures to be effective during the second and third quarters in order to make sure the economy won’t be slumping when the new government comes in," he said. The steps being mulled include tax breaks to spur tourism and assistance for people on low incomes, he said.

Pro-military and anti-junta parties are tussling to form a government after a disputed and inconclusive general election in March, following almost five years of military rule. The central bank warned the economy could be affected if the process of forming the next administration drags on to August or later.

Such a delay could affect the implementation of the national budget, public-sector projects and private-sector investment decisions, Bank of Thailand governor Veerathai Santiprabhob said at a seminar in Bangkok on Friday.

The central bank’s forecast of 3.8% gross domestic product growth in 2019 -- close to the country’s potential of about 4% -- assumes a government is in place by June, Mr Veerathai said. It’s too early to discount the possibility of an interest-rate hike, he said.

But some analysts are sceptical about the monetary authority’s scope to add to its December increase in borrowing costs, the first since 2011, because of political risk and a challenging export outlook in the trade-dependent economy.

Exports likely fell about 4% in March from a year earlier, according to a Bloomberg survey ahead of the official report on April 22. That would be the fourth decline in five months.