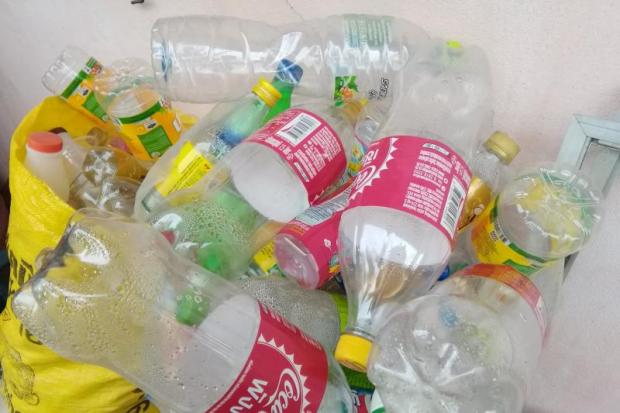 Thailand produces more than 2 million tonnes of plastic waste annually, amounting to 12% of total waste in the country. CHAIWAT SADYAEM 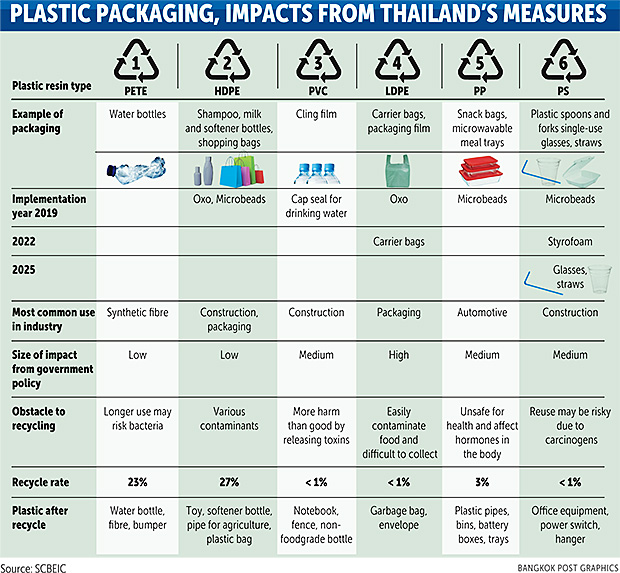 Nattanan Apinunwattanakul, an analyst with SCBEIC, said the measures call for production of more degradable packaging products, such as bioplastics, as well as using materials other than plastic.

"The production share of bioplastic is increasing, while the proportion of conventional plastic that is hard to recycle is falling in the petrochemical industry," she said. Bioplastics are often made from sugar cane or cassava, said Ms Nattanan.

"The food industry and other sectors may find opportunities to produce other types of degradable products or packaging, such as straws made of seaweed or rice, edible spoons made from wheat and paper bags," she said.

Ms Nattanan said polyethylene terephthalate (PET) is the only type of plastic that can be recycled as others are lower quality. Petrochemical producers are adapting by following recent trends, avoiding the use of plastic as new measures seek to ban plastic materials.

Furthermore, the plastic moulding industry needs to be ready for almost doubled production costs from the move to new environmentally friendly packaging, she said.

Ms Nattanan said some of the increased costs for new materials can be passed on to consumers, such as at restaurants (using straws and plastic food packaging) or retailers (using plastic bags).

As a result, the government introduced a measure in 2018 to reduce plastic use as part of a policy to cut waste volume in the country.

On Dec 26 last year, the sub-committee on plastic waste management considered an action plan for reducing and banning the use of seven types of single-use plastic between 2019 and 2025.

In 2019, it aims to ban three products: cap seals (made from PVC film), products consisting of oxo-degradable plastics (found in high-density and low-density polyethylene (LDPE)) and microbeads (made from plastic).

In 2022, the targeted plastic products to be banned include plastic carrier bags (thinner than 36 microns, made from linear LDPE (LLDPE)) and foam food containers.

As of 2025, single-use plastic cups and plastic straws are scheduled to be banned.

"The majority of foam containers, cups and some plastic straws are made from polystyrene," said Ms Nattanan.

SCBEIC said LLDPE will be the most affected product from the ban because it is used to make carrier bags and packaging film, accounting for over 55% of total LLDPE use in making plastic products.

Moreover, LLDPE is difficult to destroy and incorporate into waste management systems because it can become trapped in the wheels and gears of sorting machines for bottles, cans and paper in waste management facilities.

"With the plastic use ban in many countries, including Thailand, demand for LLDPE will fall from annual growth of 5% between 2010 and 2017 to only 1% per year in the future," said Ms Nattanan.

Globally, some 8 million tonnes of plastic waste are dumped into water sources every year.

According to the non-profit Ocean Conservancy, 150 million tonnes of plastic waste is circulating in oceans, seas and other water sources that have been building up since 1950. The amount is likely to increase because of ineffective waste management and low levels of plastic recycling, especially in developing countries.