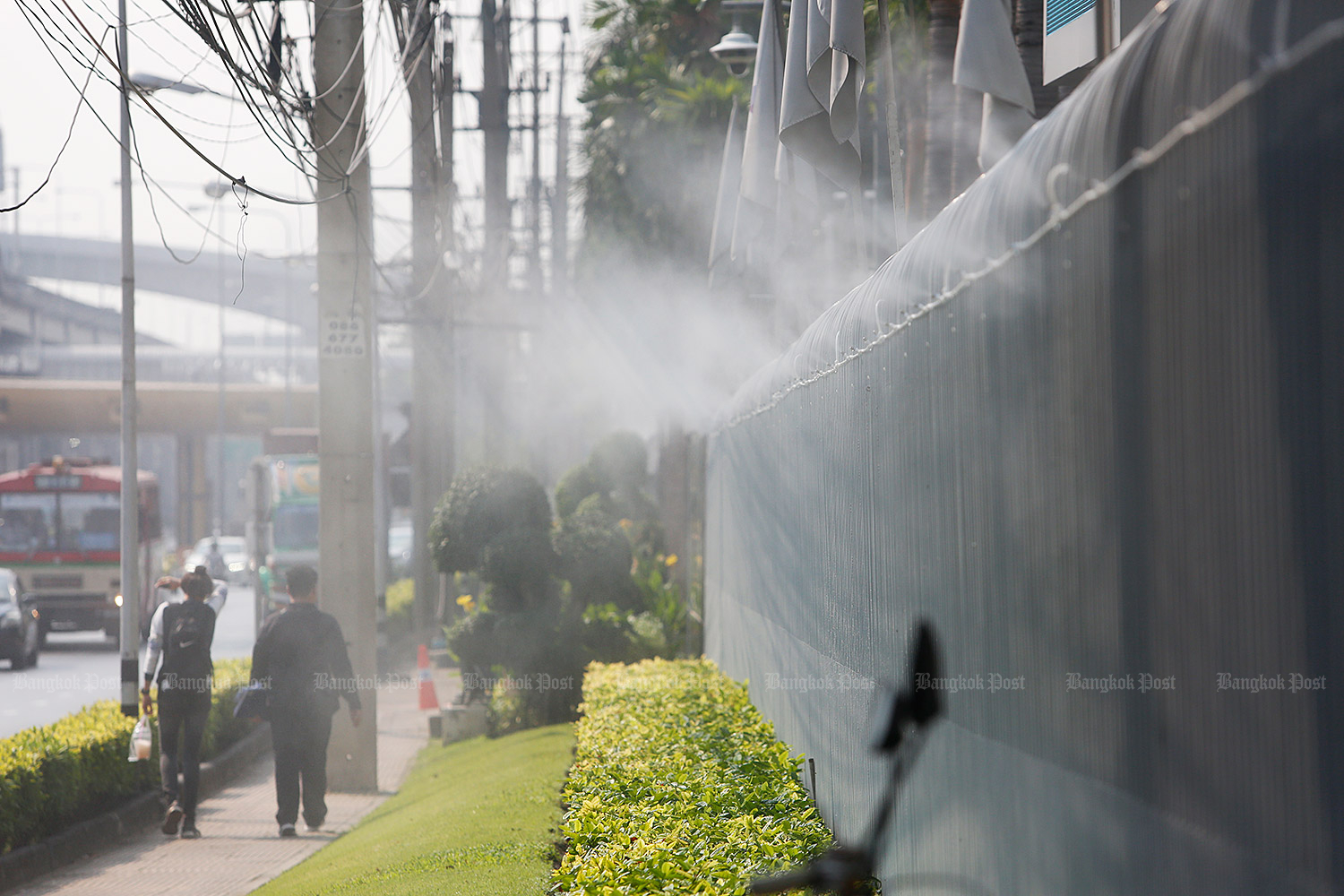 Upgrading European emission standards is high on the agenda for policymakers amid hazardous dust pollution and PM2.5 particles in the northern, northeastern and central regions.

Thailand adopted the standards in 1996 to tackle pollution, aiming to implement them a year later. At that time, Thailand was the first country in Southeast Asia to adopt the European standard and enforce rules for vehicles and refineries.

The current Euro 4 was announced in Thailand in 2012, seven years after Europe put the standard in place. Now Thailand has fallen behind Singapore, which made the jump from Euro 4 to Euro 6 in September 2017.

It all means that the country has failed to commit to each step of the Euro standard timeline. Announcement of each step comes from the National Environment Board, now chaired by Deputy Prime Minister Prawit Wongsuwon.

A source who is familiar with environmental matters told the Bangkok Post that the improvement of Euro standards will require serious collaboration by three ministries -- Industry, Energy, and Natural Resources and Environment -- because pollution has become such an urgent issue.

"Each ministry has its own plan and committee overseeing its responsibility, but taking action in the same direction is needed with more integrated work from related ministries, because there are a lot of different plans and goals," the source said. "The Industry Ministry listens to the views of car makers, while the Energy Ministry works with local refineries." 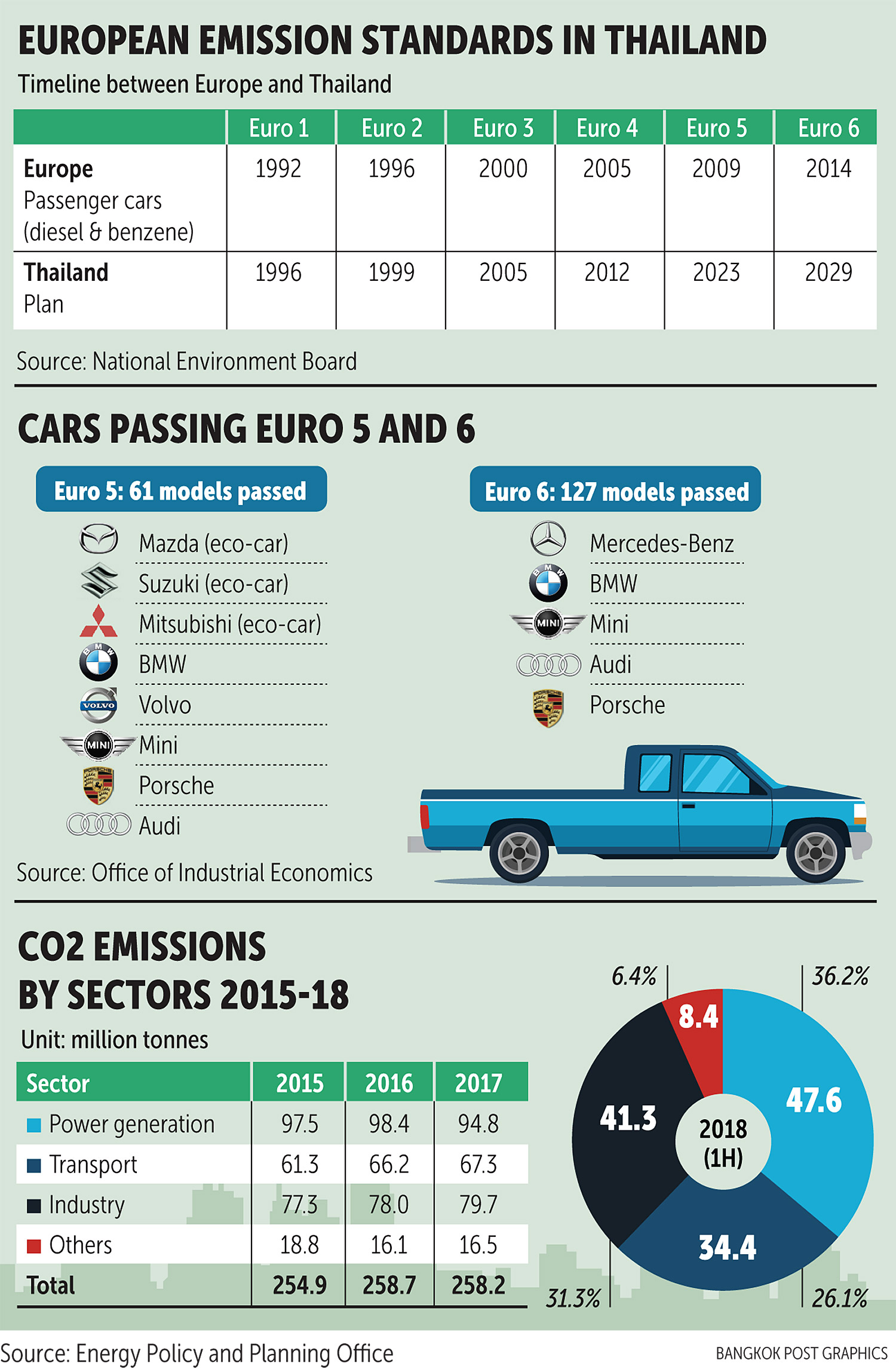 Meanwhile, the Natural Resources and Environment Ministry believes that the upsurge in dust and air pollution sprang from fuel use.

The source said the Industry Ministry is trying to implement Euro 5 by 2021 and Euro 6 by 2022, with all car makers in the country to comply in that time frame. The Energy Ministry will take Euro 5 action for the country's refinery sector in 2023.

"It seems every ministry has its own mission and goals without any cooperation," the source said.

The National Environment Board is trying to bring officials of the three ministries together and propose a common agenda, but the meeting has been postponed several times.

Every stakeholder wants to see a clearer direction on Euro emission standards, the source said.

The Office of Industrial Economics (OIE) under the Industry Ministry has announced an official action plan for Euro 5 and Euro 6 that car makers and car importers must comply with by 2021 and 2022.

Director-general Nattapol Rangsitpol said the OIE is drafting the announcement from the ministry for immediate issue once the acting minister signs it.

"The ministry's announcement means that before the end of 2021, all vehicles sold in Thailand will be in Euro 5 compliance and Euro 6 will follow a year later," Mr Nattapol said. 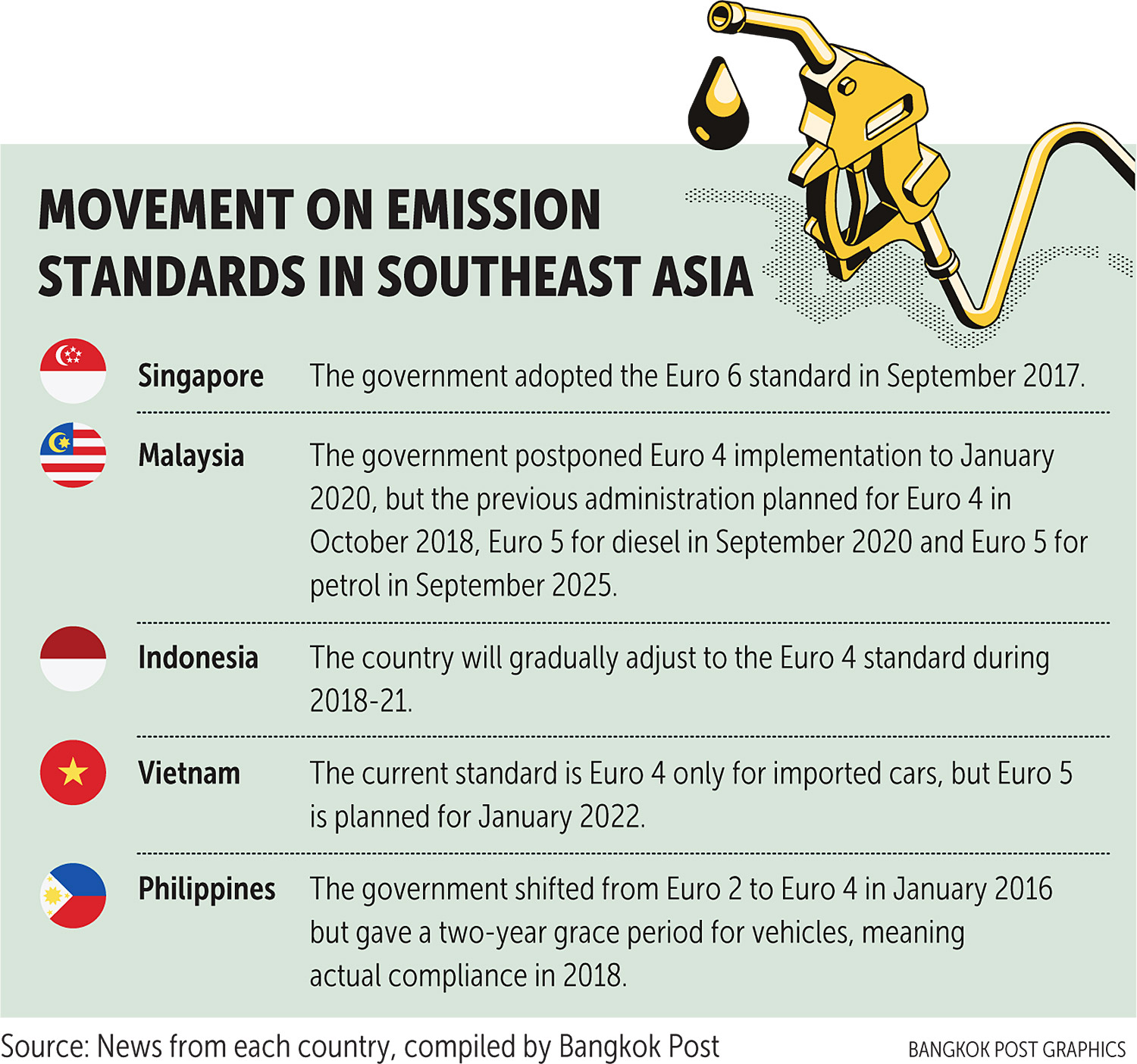 Moreover, the OIE is working with the Energy Ministry to share new information from the country's refining sector and upgrade emission standards in line with the government's policy.

"That means there is plenty of remaining capacity in Euro 5 for new vehicles, projected at 3-4 million cars consuming all 500 million litres daily," Mr Nattapol said. "So, working with the Energy Ministry will bring all refining companies into future Euro 5 compliance and let them plan their production capacities."

The Energy Business Department forecasts that upgrading each Euro standard will require an investment of 30 billion baht from six Thai refiners.

Nantika Thangsuphanich, director-general of the Energy Business Department, ordered all refineries to conduct the upgrade plan for Euro 5 in early March, and they accepted.

The Board of Investment also offers privileges for local oil refiners, but each company has to summit an application to upgrade production from Euro 4 to Euro 5 by Dec 30. The refiners will receive an exemption from import duties on machinery.

Some oil refiners can produce the Euro 5 standard to support local demand, while only two retail brands, PTT and Bangchak, offer Euro 5 diesel for high-end motorists and luxury cars.

"The 30-billion-baht estimation was projected four year ago, so the new budget could be lower than in the past," Mr Kulit said.

Atikom Terbsiri, president and chief executive of Thai Oil, said the refiner is ready to implement Euro 5 in addition to its ongoing Clean Fuel Project (CFP), as the company aims to enhance its competitiveness in the sector.

Thai Oil has earmarked US$50 million for Euro 5 improvements, separate from its $4.83-billion investment in the CFP, located at its refinery in Sri Racha district, Chon Buri province.

Construction is expected to begin in the middle of this year, Mr Atikom said. 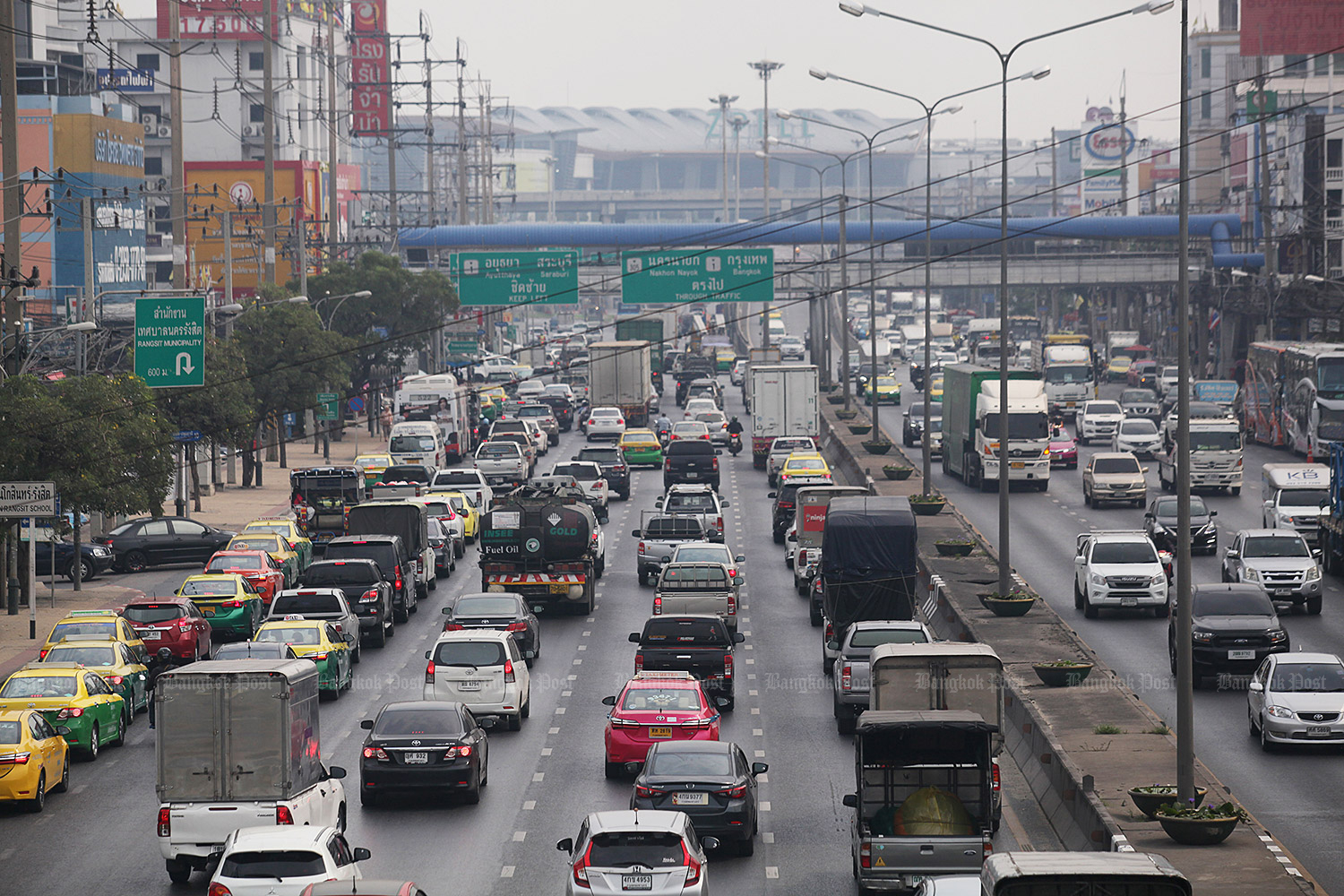 The sheer amount of vehicles on the roads contributes to air pollution. (Photo by Apichit Jinakul)

The CFP will improve the production process by enhancing its capability to refine heavy crude oil, whose price is lower than the light crude that Thai Oil currently refines. This will result in reduction of procurement costs for raw materials to be converted into light oil with low sulphur content in accordance with the Euro 5 standard.

Thai Oil will run at full capacity for Euro 5 and add the new CFP in 2023.

Chaiwat Kovavisarach, president and chief executive of Bangchak, said the Euro 5 diesel of the company can be refined at only 15-20% of total capacity, but the investment budget must be raised to comply with the government's policy.

Bangchak conducted a study several years ago that estimated the cost passed on to the retail price at 0.50-1 baht per litre.

But technology and machinery at refineries are improving fast, and the development cost for higher emission standards will be lower than in the previous study, Mr Chaiwat said.

"The new study is expected to be finalised in the second quarter of 2019," he said.

Furthermore, the Energy Ministry plans to enforce biodiesel B7 to comply with the Euro 5 standard soon, to be promoted as a premium-grade diesel.

B7 means 7% methyl ester from crude palm oil blended with diesel, while B10 is a 10% blend. The ministry plans to set B10 as the fundamental diesel at petrol stations in the weeks ahead.

Energy Minister Siri Jirapongphan said B20 will be promoted for diesel-powered trucks, buses and pickups with widespread availability.

B10 and B20 retail for five baht per litre less than B7. But the ministry will widen the price gap of B20 to seven baht per litre after B7 complies with the Euro 5 standard.

Toyota and Isuzu have said their new pickups are B20-compatible, and the government offers an excise tax discount of 0.5-2%, depending on the size of the pickup.

The Energy Ministry is confident that encouraging biodiesel consumption will help tackle dust and particle emissions.

Car makers agree that complying with tighter emission standards under Euro 5 and Euro 6 will mean higher production costs, which could be passed on to motorists. Once the government issues an order, car companies must comply.

"As a matter of fact, many Thai-made vehicles of Toyota are shipped to many countries that meet the Euro 5 and 6 standards, so Toyota has to study how it can produce for both domestic and export cars in the same specifications," Mr Suparat said.

He said local suppliers cannot produce diesel particle filters, a core component for pickups and diesel-power vehicles under higher Euro standards. Toyota currently has to import the component from other countries, meaning the upgrade cost for diesel engines will be higher.

But for petrol engines, the upgrade cost to Euro 5 is less high because vital parts can be sourced locally.

"So there is a possibility that Toyota will offer Euro 5 in the petrol version prior to the deadline at the end of 2021," Mr Suparat said.

According to the OIE, upgrading to Euro 5 or Euro 6 for benzene engines costs 800-5,000 baht per car in the production process. The highest upgrade cost would be for diesel engines, mostly for pickups, in a range of 10,000-95,000 baht per vehicle.

Mr Nattapol of the OIE said these estimations were made almost 10 years ago when the government was planning for Euro 5 and Euro 6 and after Euro 4 took effect.

"At that time, the government received some disagreement from car makers for many reasons, such as unreadiness and the implementation of higher standards than in other countries," he said. "But Thailand cannot wait for the car makers' readiness, because automotive technologies have improved for the past decade."

As a result, the upgrade cost for vehicles could be lower than the previous estimation. And the Euro 5 and Euro 6 standards are hardly breaking news in the automotive industry.

"These two standards have been developed for a decade in the global industry," Mr Nattapol said.

He said the hazardous dust and PM2.5 particles are Thailand's most urgent problem, so there's no time to avoid the issue or fail to comply with the government's rules.

"Every stakeholder has to pay a cost, not just pedestrians who are breathing the pollution from vehicles," Mr Nattapol said.