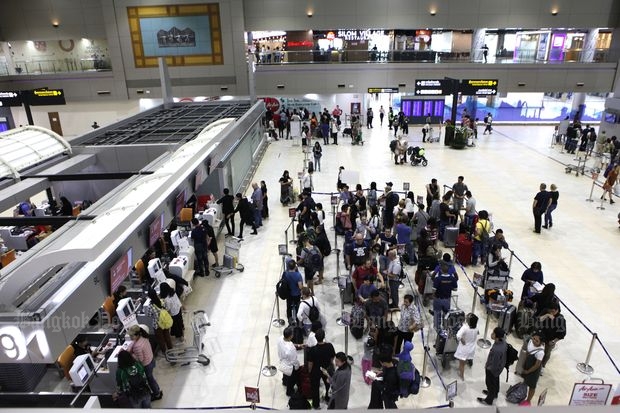 Travellers will pay more for airfares after the fuel tax increase but whether it's 50 baht or 150 baht remains to be seen. (Bangkok Post file photo)

Airlines that are raising fares to cover higher jet fuel costs after a tax increase are charging too much, says a government spokesman. The airlines, meanwhile, are taking issue with the government's calculations.

According to Excise Department calculations, the increase should result in a 50-baht fare increase per seat per hour, not 150 baht as claimed by the airlines, he added.

Since most domestic flights are only 60 to 90 minutes, the fares should be increased by around 50 baht, he said.

The airlines have argued that they obtained the 150-baht figure by multiplying the amount of fuel they actually used in a year by the additional tax cost and then dividing by the number of passengers in the same year.

They did not assume that all 200-300 seats in each flight would be filled, as the Excise Department apparently did.

"Oil tax changes hinge on world supply and demand and additional revenue will be returned to the people in various forms," Lt Gen Sansern added.

The spokesman also dismissed the comments of critics who said the government must have been desperate for more revenue.

The government is not broke, he said, and the increase in the aviation fuel excise tax had nothing to do with boosting the bottom line.

He said the fiscal position as of the end of December 2016 was sound, with treasury reserves -- the balance of revenue and expenditures -- standing at 74.9 billion baht.

"In the first quarter of fiscal 2017 [October-December 2016], the government steadily injected cash into the economy, as evidenced by a 78.2-billion-baht year-on-year increase in budget disbursements, while revenue collection exceeded the target by 27 billion baht," he said.