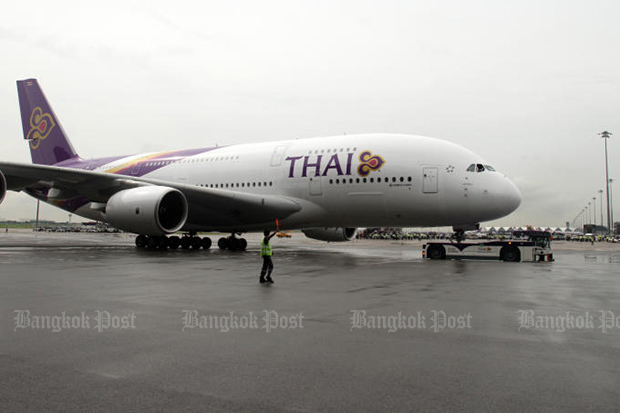 An A380 of Thai Airways International at Suvarnabhumi airport. An aircraft of the same type was slightly damaged on the ground in Paris on Wednesday. (Bangkok Post file photo)

An Airbus A380 of Thai Airways International was slightly damaged when it was clipped by a vehicle bringing meals to the aircraft at Charles de Gaulle airport on Wednesday.

The airline said there was minor damage to a wing and flight TG931, scheduled to depart for Suvarnabhumi airport from Paris at 1.40pm local time, was cancelled.

The flight carried more than 400 passengers and crew. The crew returned to their hotel and some passengers were transferred to other airlines with flights to Bangkok.

The damage was being repaired and safety checks would be made before the plane is put back into service,  the airline's statement said.

The remaining passengers would fly back to Thailand on the same aircraft once it was cleared.  They were expected to return on Thursday.

"Thai Airways International will go into a process of financial compensation for the damage caused by the food delivery firm," the airline said.