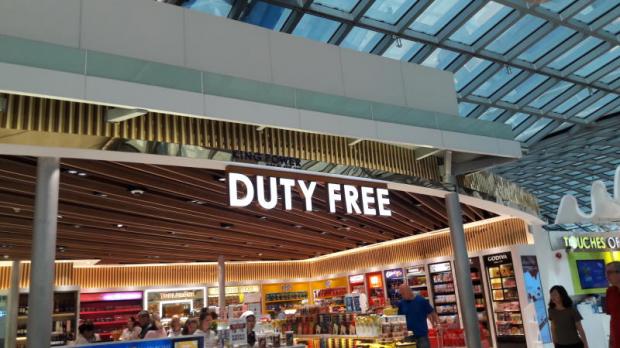 The contract for duty-free shop concessions at Suvarnabhumi airport expires on Sept 27, 2020. (Photo by Walailak Keeratipipatpong)

The private sector has slammed the government for giving Airports of Thailand Plc (AoT) latitude in handling the controversial duty-free shop bidding, demanding accountability for a process that would damage the country.

Worawoot Ounjai, president of the Thai Retailers Association (TRA), said the latest ruling on the bidding process for the duty-free shop concession will allow the AoT to arrange the bidding by itself.

"As this administration comes to an end, we've witnessed much news about its decisions that benefit several business groups, from high-speed trains and telecom to duty-free shop concessions. Thais have to ask this government if it will be responsible for future actions that bring damage to the country," he said.

"We've seen poor results from this type of bidding before and called on the government for accuracy and transparency. But the answer comes as expected. We have to get over it because this is the state of our country."

On Thursday, the Public-Private Partnership (PPP) committee meeting, chaired by Prime Minister Prayut Chan-o-cha, ruled that the bidding process for the duty-free shop concession handled by the AoT does not fall under the recently amended PPP Act.

Prapas Kong-ied, director-general of the State Enterprise Policy Office, said a legal subcommittee under the PPP committee chaired by the attorney-general has found the duty-free concession is not regarded as a core activity of AoT, so it does not comply with the PPP Act 2019.

According to Section 7 of the PPP Act, a project considered to be basic infrastructure, public service or a related business must comply with the Act.

Bracket 3 of Section 7 stipulates that airport and aviation businesses fall under the Act.

The committee has also ordered the AoT to continue the bidding process as planned.

The committee's ruling is scheduled to be submitted to the cabinet for acknowledgment on April 24.

AoT president Nitinai Sirismatthakarn said the company will proceed with the concession process as scheduled and expects to unveil the winning bidders by May 31.

To end fears of a monopoly and ease the pressure after critics complained about the single-concession policy, the AoT recently decided to split the bidding into two contracts: one for Suvarnabhumi and the other for the remaining three airports in Chiang Mai, Phuket and Hat Yai.

Mr Nitinai said April 18 was the last day to purchase a bidding envelope for the duty-free shop at Suvarnabhumi airport.

On April 22, AoT will acknowledge the qualifications of applicants who bought the bidding envelopes.

The outcome of the bidding will be proposed to the AoT's board in June.

The existing contract for duty-free shop concessions at Suvarnabhumi airport expires on Sept 27, 2020.