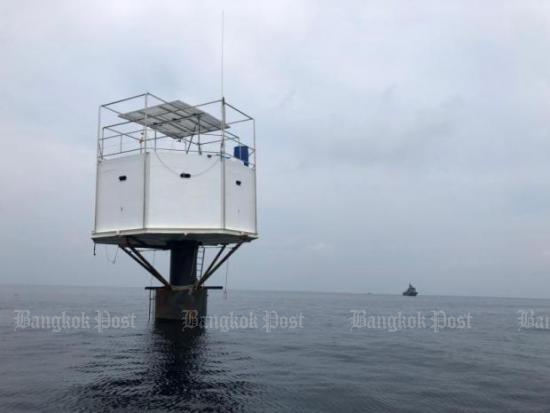 OUTPOST: This platform, built off the coast of Phuket by an American man and his Thai wife, is considered to be illegal.

The Third Naval Area Command has filed a police complaint against an American man and his Thai wife who set up a floating living platform 12 nautical miles off the coast of Phuket, a practice also known as seasteading.

Staff judge advocates from the command were sent to lodge the complaint at Wichit police station in Phuket on Saturday, according to a source at the command.

They accused Chad Andrew Elwartowski and his Thai wife, Supranee Thepdet, with an English alias of Nadia Summergirl, of breaching Section 119 of Criminal Code.

The section concerns any acts that cause the country or parts of it to fall under the sovereignty of a foreign state or deterioration of the state's independence.

It is punishable by death or life imprisonment.

The source said officers found evidence which led them to believe the couple was engaging in the setting up of an independent state. Such an act would have a negative impact on the country's shoreline, the source said.

"The regional office of the Marine Department will be contacted to remove the structure from the sea soon," the source said.

"If it is left untouched, it will hinder ship navigation since the route is used for the transport of oil to Phuket."

Referring to claims by the couple that the seastead was set up outside Thai maritime territory, the source said the claim was untrue.

Officers, the source said, are investigating the Thai company in Phuket responsible for building the platform for possible financial misconduct. Mr Elwartowski was rich from bitcoin trading.

The Maritime Enforcement Coordination Centre's third area command on Saturday held a news conference about the seastead, covered recently by both domestic and foreign media.

The pair reportedly aimed to set up a permanent shelter out of any state territories by exploiting a loophole in the United Nations Convention on the Law of the Sea.

The practice of attempting to establish micronations that claim to be an independent nation or state but are not recognised by world governments or major international organisations is expanding globally, particularly among those who become rich from cryptocurrency trading, according to officers.

Vice-Admiral Sittiporn Maskasem, commander of the Royal Thai Navy Third Area Command, on Saturday sent officers to where the structure was set up, 15 nautical miles southeast of Racha Yai island.

Navy officers tried to make radio contact with people on the platform but no one responded, officers said.