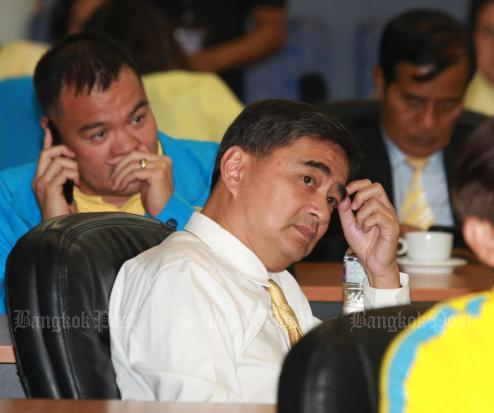 Former Democrat leader Abhisit Vejjajiva attends the orientation programme for the party's MPs at its head office on Tuesday. The attendees discussed a wide range of issues for parliamentary work. The party gained 52 MPs in the March 24 election. (Photo by Apichit Jinakul)

Former Democrat leader Abhisit Vejjajiva has denied media reports he will resign as an MP if his party joins the pro-regime Palang Pracharath Party (PPRP) to form a new government.

It is just a "groundless rumour", Mr Abhisit told reporters before a meeting of Democrat MPs at the party's headquarters on Tuesday.

The former premier announced before the March 24 election that he would not support Prime Minister Prayut Chan-o-cha's return to the top post for fear that it would cause political conflict between his supporters and anti-coup groups, which oppose any efforts to prolong his power.

The army chief-turned-politician staged a coup five years ago to bring Thailand out of a political stalemate caused by months-long massive rallies against the Pheu Thai Party-led government, which was then accused of abusing power.

The rumour about Mr Abhisit came as the Democrat Party mulls whether to ally with the PPRP, which has nominated Gen Prayut for prime minister.

Many Democrats agree with Mr Abhisit's stance against Gen Prayut, but others want to see the party in the coalition government.

Reportedly a group of Democrat MPs who side with Thavorn Senniam, a Songkhla MP, on Tuesday gathered to "pressure" the party into joining forces with the PPRP.

The group earlier supported Democrat heavyweight Pirapan Salirathavibhaga to be the new party leader, but he lost to acting party leader Jurin Laksanavisit in the May 15 vote.

Last month Mr Thavorn wrote on his Facebook page that the majority of Democrat constituency MPs thought the party should be part of a governing PPRP-led coalition.

On Tuesday, Democrat party-list MP Banyat Bantadtan said he wants to be an "ordinary MP" rather than House speaker, following media reports linking him with the position.

Mr Banyat said he prefers working to solve constituents' problems. By not assuming the top job in the legislative body, he insisted: "I can easily work and travel to meet people."

In another related story, three senators -- Pornpetch Wichitcholchai, former National Legislative Assembly president, Gen Singsuek Singphrai, a former NLA member, and Supphachai Somcharoen, a former Election Commission member, look certain to be voted in respectively as Senate speaker and two deputies, according to a source close to the matter.

Other candidates will not be nominated in order to build an "image of unity" in the Senate, he said.