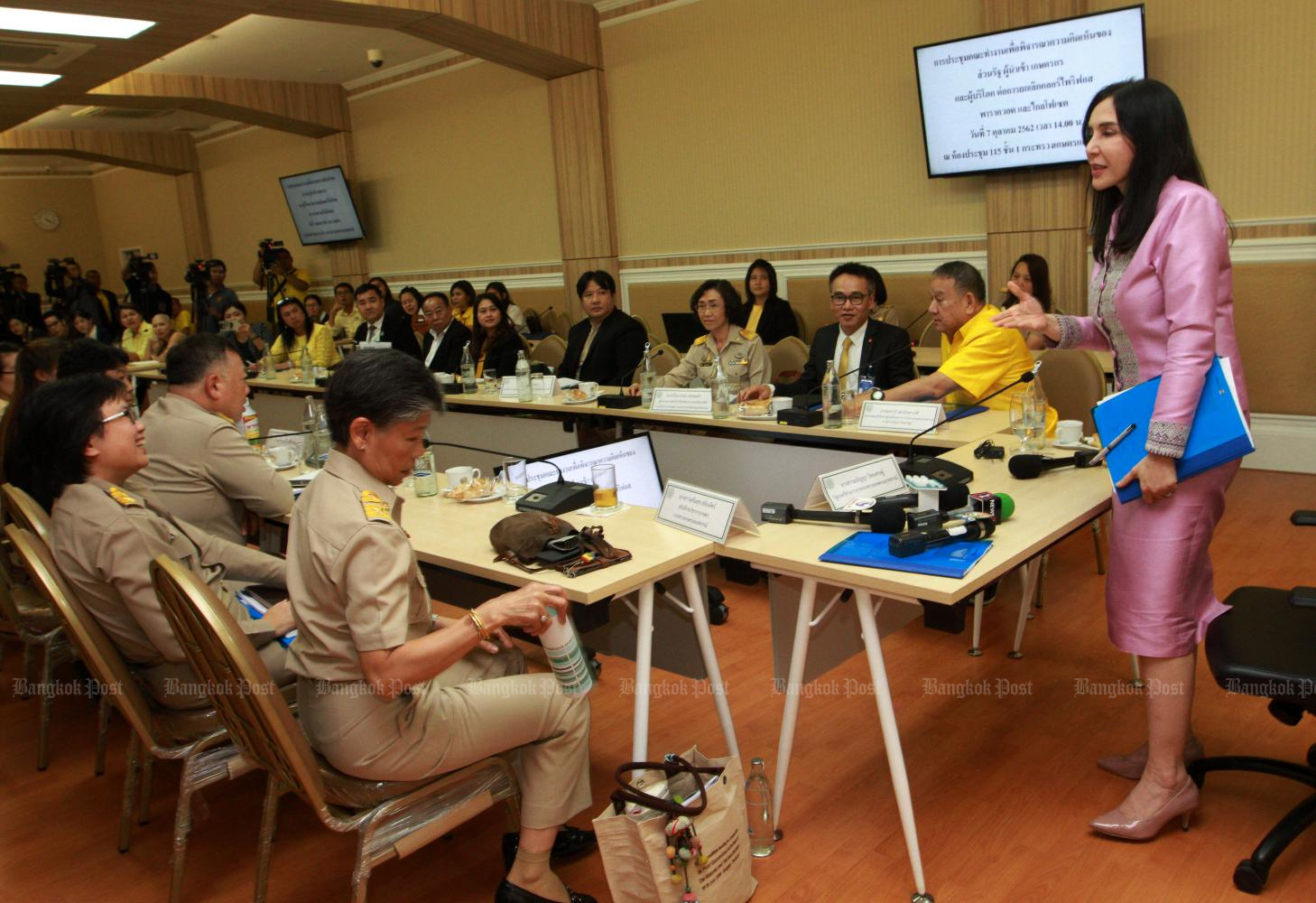 A four-party committee has unanimously voted for a ban on the use of three toxic farming chemicals, heaping pressure on the National Hazardous Substances Committee (NHSC), which has resisted an outright ban, to follow suit.

Chaired by Deputy Agriculture and Cooperatives Minister Mananya Thaiset, the panel members spent two hours on Monday reviewing a report on the chemicals and voted 9-0 in favour of the ban.

The committee was set up by Prime Minister Prayut Chan-o-cha and will forward its decision first to him and then to the 29-member NHSC, which is scheduled to review the issue later this month.

So far, the NHSC has only agreed to restrict use of the popular farm chemicals until it finds better alternatives despite widespread calls for a total ban from health and consumer advocacy groups.

Ms Mananya said the NHSC would be asked to classify paraquat, glyphosate and chlorpyrifos as Type 4 from Dec 1 onward, noting that possession, distribution, importing and production of this category of chemicals is prohibited.

She said she expected the NHSC to bring forward its planned meeting on Oct 27 in the wake of her committee's recommendation. Representatives from the Agriculture and Cooperatives Ministry, the Public Health Ministry and the Industry Ministry on the NHSC are expected to honour the decision.

Ms Mananya dismissed rumours that investors were gearing up to import alternatives and noted that imports of chemicals are subject to a series of reviews before they are allowed.

"This is a New Year's gift for the Thai people. The committee members shouldn't be afraid of being taken to court. If you are taken to court over this, I'll go with you," she said.

"However, the job isn't quite finished. Let's wait for a few days and we'll make it our victory," she said.

The deputy minister insisted that alternatives to the three chemicals exist but they take much longer to work and pledged to campaign for the ban of any farm chemicals that pose a danger to the environment or public health.

It was reported that Ms Mananya's committee met for two hours behind closed doors to review the report on the dangers and impacts caused by the use of the three chemicals before allowing the press to observe the vote.

Department of Agriculture director-general Sermsuk Salakpetch became the focus of the attention during the vote as her department is responsible for the regulation of the chemicals.

Ms Sermsuk told the meeting that because the ban was in line with the policy of the deputy agriculture minister and Deputy Prime Minister and Public Health Minister Anutin Charnvirakul and the dangers were evident, she would vote in favour.

Industry Minister Suriya Jungrungreangkit said the NHSC, which is under the ministry's supervision and chaired by the industry permanent secretary, would not drag its feet over the proposed ban.

"If the committee [chaired by Ms Mananya] resolves to ban [the chemicals] and forwards the decision to the ministry this week, we can proceed," he said.

Meanwhile, the Democrat Party will also support a ban on the three chemicals, according to the party's deputy leader and head of its economic team, Prinn Panitchpakdi.

"It has been our stand from the outset that we do not support the use of the herbicides paraquat and glyphosate, and the pesticide chlorpyrifos," he said.

"This is consistent with our goal to promote organic and sustainable farming practices, which will raise the standard of our agricultural produces every step of the way," he said.

Vitoon Lianchamroon, director of Biothai (Biodiversity Sustainable Agriculture Food Sovereignty Action Thailand), said the Department of Agriculture must submit a comprehensive report to the NHSC otherwise it will be used as an excuse to further delay a ban.

"The report must include health and environmentally friendly alternatives as well as measures to help farmers absorb increases in production costs," he said.