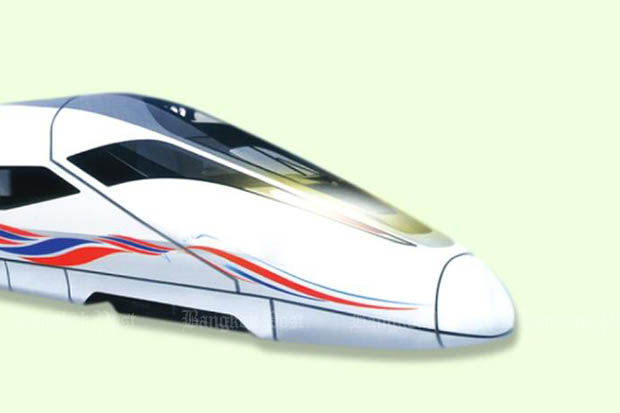 An artist's impression of the high-speed train for the track to be built by the Charoen Pokphand consortium connecting Suvarnabhumi, Don Mueang and U-tapao airports. (Photo from Charoen Pokphand Group)

The signing of the 224-billion-baht contract between the State Railway of Thailand and Charoen Pokphand Group (CP) for the rail link between three international airports has run into another delay following the resignation of the entire SRT board.

Transport Minister Saksayam Chidchob said on Tuesday that the Transport Ministry had decided to defer the signing of the contract from Oct 15 to Oct 25 after the SRT board members all stepped down last Tuesday.

The ministry needs a new SRT board in place first to avoid the possibility of the contract being invalidated if the agreement is inked in its absence, he said.

The SRT is impatient for the consortium to sign the contract for construction of the high-speed train linking Suvarnabhumi, Don Mueang and U-Tapao airports, after repeated delays.

The CP consortium won the project with a 224-billion-baht bid in December last year. The government had threatened to blacklist the group if it failed to meet the Oct 15 deadline.

The delays are due to concerns by the bid winners over land expropriation and eviction problems.

The consortium's latest move was a request for the government to share the risk in the project. The ministry and SRT denied there was a land issue, and refused to enter into risk-sharing.

The resignation of the SRT board is common after a change in government, and is regarded as a matter of etiquette. However, on this occasion, the resignations came as a surprise because the board members who convened the last meeting on Sept 27 gave no indication that they would all resign just four days later.

"We have to strictly follow legal procedures. If there is no SRT board, we cannot forward a signed contract to the cabinet," said Mr Saksayam, although he added he was confident a board would be formed by Oct 25.

Thirachai Phuvanatnaranubala, a former deputy governor of the central bank and former finance minister, accused the government of "deceiving people" by using the high-speed rail project to divert national budget into the pockets of certain business groups.

The government, he said, should have invested in a double-track system connecting the three airports, which would cost 50 billion baht, a third of the cost of the high-speed project.

board board members rail link contract