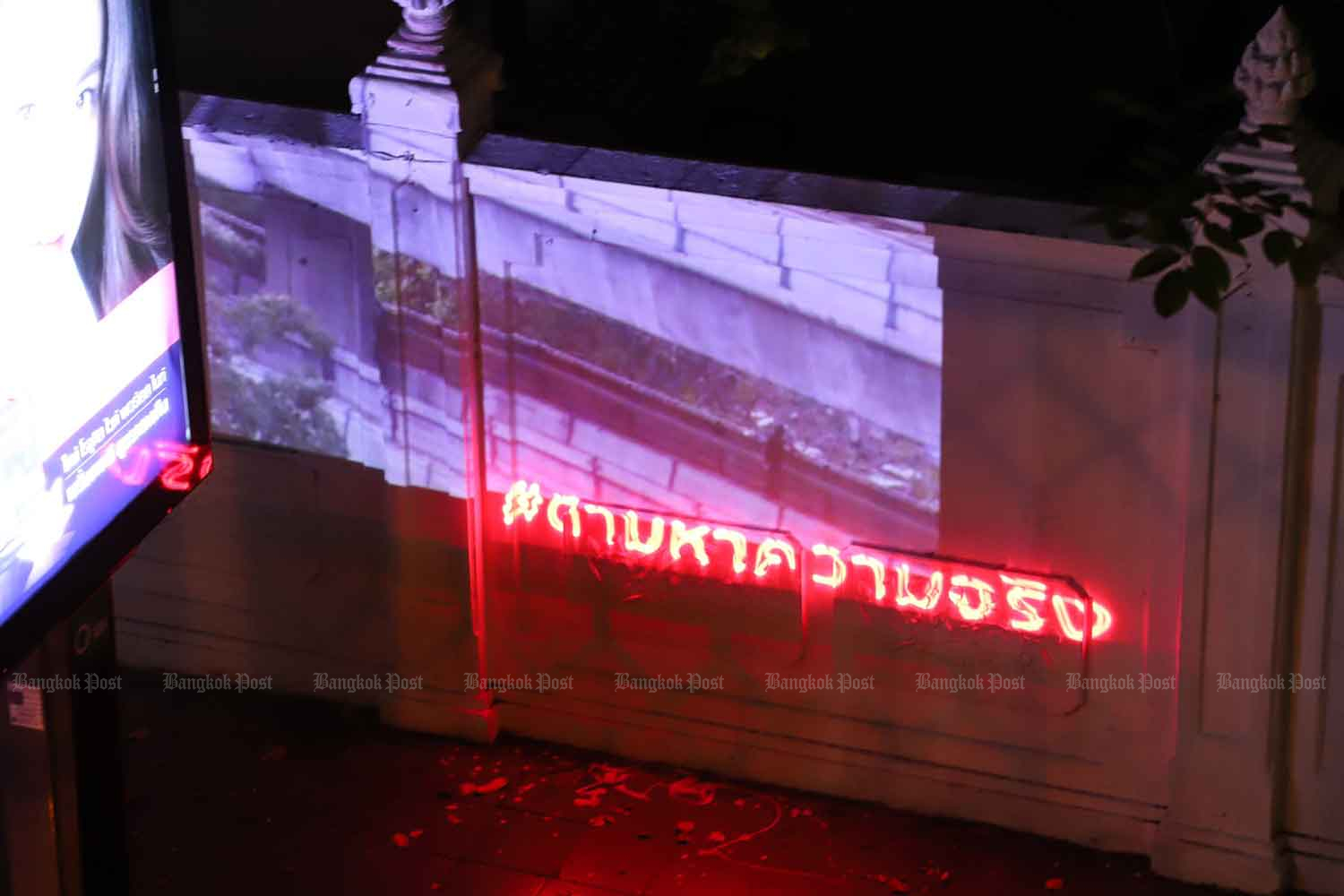 This image from the Progressive Movement shows a laser message in Thai meaning "finding truth" projected on a fence at Wat Pathum Wanaram in Bangkok.

Police and soldiers have warned the Progressive Movement of prosecution for its building projections, with messages related to the political demonstration crackdown in 2010.

On Sunday night, the political message "Searching for Truths" was projected on a number of buildings in Bangkok linked to the May 2010 red-shirt crackdown in which almost 100 people were killed.

Among the lit-up places were the sites where several people were killed 10 years ago — the walls of Wat Pathum Wanaram, Defence Ministry, Democracy Monument, CentralWorld, Soi Rangnam and BTS station near Ratchaprasong intersection.

A police spokesman said on Tuesday that police were investigating who was behind the move and which laws they might have violated.

"This month, some people have tried to confuse society by reviving closed cases," he said.

Earlier on Tuesday, the deputy national police chief said the people who were behind the projection should avoid creating conflicts in the country. Police were considering details of legal violation but had not planned to call anyone for interrogation yet, he said.

The photos of the projection went viral on social media on Monday with the hashtag “Searching for Truths”, which became top-trending in Thailand for 24 hours with 1.2 million retweets.

At that time, nobody knew who projected the images.

On Monday night, the Progressive Movement posted on its Facebook a video clip of people working on the projection in a vehicle, with the message: "No need to sweat trying to find who projected the light for truths. It’s us — the people — ordinary men who join hands in seeking the truths."

Hours later, Pannikar Wanich, member of the movement and former spokesperson of the disbanded Future Forward Party, told reporters the projected messages were “trailers” to promote the movement’s activities, mainly films and seminars, to be held until May 20.

“I’d rather not use the word ‘admit’ since we never hide it. This is a campaign owned by no one and created by people wanting to know the truths of an important event in Thai political history.

“We’re the one who projected it. Don’t look anywhere else, and please don’t threaten small people with no voice,” she said.

The Progressive Movement was founded in March by Thanathorn Juangroongruangkit, former leader of the disbanded Future Forward Party, Piyabutr Saengkanokkul, the party’s former secretary-general, and Ms Pannika after their party was disbanded for accepting money from an illegitimate source.

In May 2010, pro-Thaksin Shinawatra red-shirts called for the dissolution of the House and a fresh election. A crackdown followed. The 94 people killed were civilians (76), soldiers (8), health volunteers (6), policemen (2) and reporters (2).