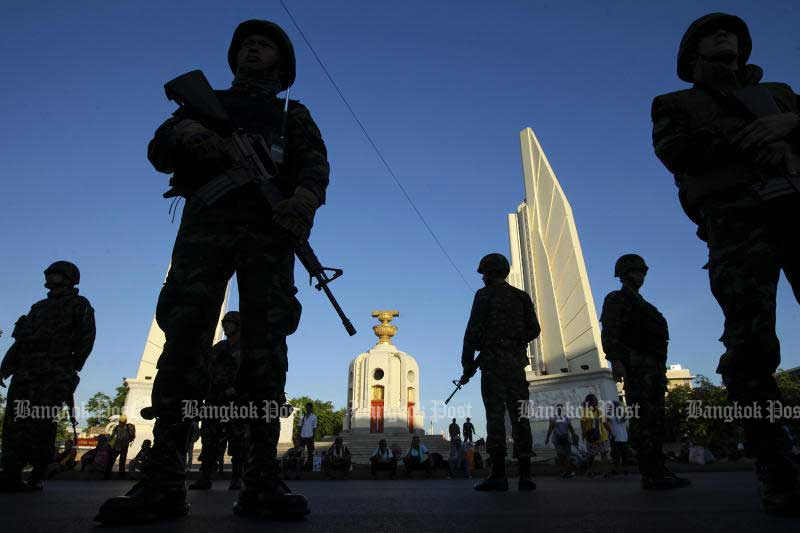 Soldiers stand guard blocking potential anti-coup protesters at Democracy Monument in Bangkok on May 23, 2014, one day after the coup. (Photo by Patipat Janthong)

The government is bracing for a tough road ahead as political tension builds post-Covid-19, according to academics. The prediction comes as Friday marks the 6th anniversary of the May 22, 2014 coup.

The Covid-19 pandemic has disrupted activities including a political campaign challenging the Prayut Chan-o-Cha government. But the country is likely to see more political tension now that fears of the virus are subsiding.

Stithorn Thananithichote, director of the Research and Development Office at King Prajadhipok's Institute, predicted the Progressive Movement led by Thanathorn Juangroongruangkit will increase its pressure after the upcoming debate on the three executive decrees authorising a borrowing loan to help the economy following the Covid-19 lockdown.

The decrees are now seen as instrumental to the political stability of the government which came to power after the general election in March last year. However, to its critics, the current government is nothing but a new face on the old National Council for Peace and Order (NCPO) which staged a coup on this day in 2014.

The other decrees empower the Bank of Thailand to provide soft loans to help small- and medium-sized enterprises.

The opposition Pheu Thai and Kao Klai parties are getting ready for the three-day debate on May 27-29 to consider the loan decrees.

However, Mr Stithorn argues that even if the decrees are rejected by the House, the coalition government has other ways to channel funds to the economy.

He said the Progressive Movement, the reincarnation of the now-defunct Future Forward Party (FFP), positioned itself as an agent of political change and succeeded in bringing young voters on board. The campus rallies held before the virus broke out, called student flash mobs, may also grow in intensity as student critics were upset by the FFP's dissolution.

The movement has already made its first moves, beaming laser projections on city landmarks, "seeking the truth" ahead of the 10th anniversary of the political violence in 2010.

Democrat Party MP for Trang Sathit Wongnongtoey said the Covid-19 pandemic has spared the government political confrontations and possible unrest. Political tensions were increasing when the outbreak hit the country.

Meanwhile, Phumtham Wecha­yachai, adviser to the opposition leader, said Prayut has failed to deliver on promises made when he seized power. The general election did not bring about a functional, elected government.

"I think he has failed in all aspects," he said.