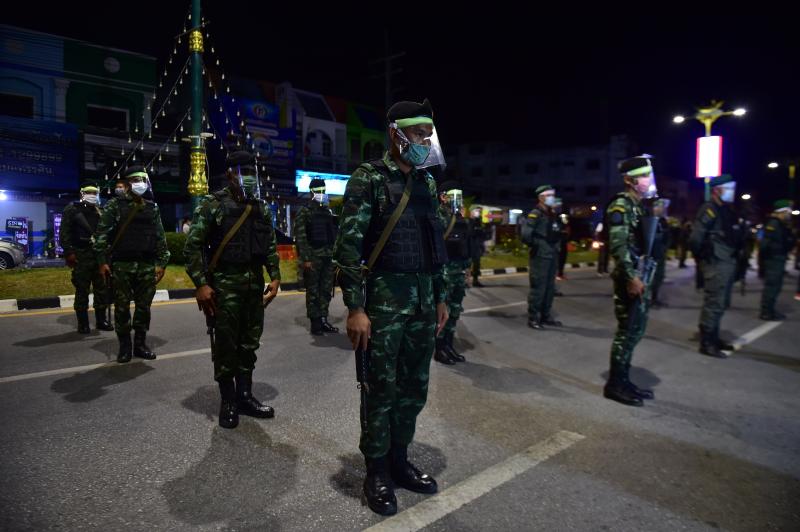 This photo taken on April 3, 2020 shows soldiers wearing protective gear on an empty road in Thailand's southern province of Narathiwat, before a night of enforcing a nationwide night curfew aimed at stemming the spread of the Covid-19 coronavirus. (AFP)

The military-backed government has extended Thailand’a state of emergency for a second time, to the end of June, despite opposition calls to scrap it after novel coronavirus cases dwindled.

The step is needed to lower the risk of another wave of illness as a lockdown is eased, spokeswoman Narumon Pinyosinwat said Tuesday after the Cabinet backed the move. The emergency imposed late March gives Prime Minister Prayut Chan-o-cha sweeping powers, including a ban on large gatherings that prevents anti-government protests of the kind seen before the virus hit.

The administration is loosening the lockdown in stages to restart the economy and reiterated the emergency is an apolitical tool to counter the pathogen. The opposition argues less strict legislation can manage the outbreak. It’s also raised the prospect of asking a court about the lawfulness of bills earmarking 1.9 trillion baht in stimulus to fight a recession.

“The latest extension is a consolidation of power, and an unnecessary use of power,” said Anusorn Iamsa-ard, a spokesman for Pheu Thai, the largest opposition party. Pheu Thai said it could ask the Constitutional Court to assess the validity of the stimulus legislation if a debate in parliament from Wednesday fails to bring clarity.

The administration rolled out executive orders under the emergency for the stimulus programme, which includes 1 trillion baht of borrowing by the government and another 900 billion baht of steps from the Bank of Thailand.

The controversy over the package is a potential risk to the economy depending on how it develops, Tim Leelahaphan, a Standard Chartered Bank economist in Bangkok, wrote in a note.

The National Economic & Social Development Council estimates gross domestic product may shrink as much as 6% this year because of the damage to tourism and exports. Other forecasters predict up to 10 million jobs could be lost.

Gen Prayut, a former army chief, seized power in a military coup in 2014, ruled at the head of a junta for five years and returned as leader after last year’s disputed election, which was held under rules crafted during the junta’s tenure.

Before large gatherings were banned due to the virus crisis, Gen Prayut and his backers in the royalist establishment faced escalating protests from critics who dispute the fairness of the poll.

The majority of Thailand’s confirmed 3,045 virus cases have recovered and very few if any new infections have been detected in recent days. Officials remain wary of a second wave of cases as the lockdown is lifted.