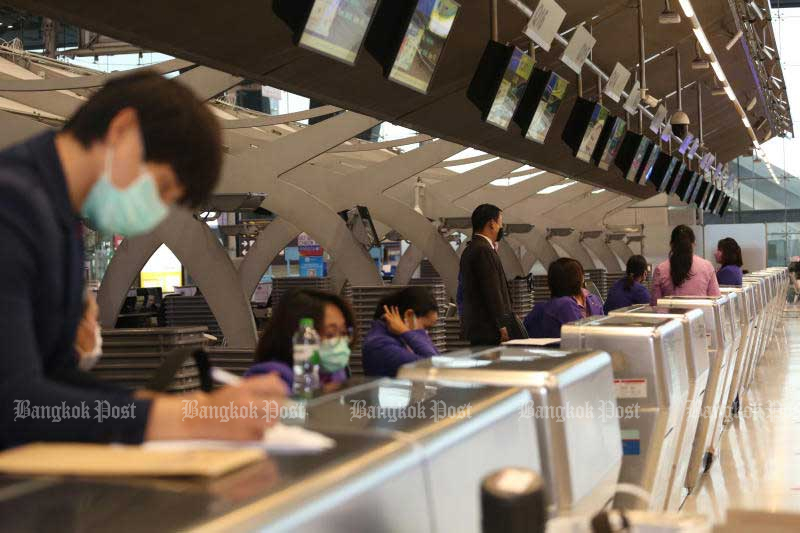 Airports of Thailand takes back some of the counters and stands of Thai Airways International to reflect planned cutbacks in THAI flights out of Suvarnabhumi airport. (Photo by Varuth Hirunyatheb)

Airports of Thailand (AoT) took back more than 50% of the check-in counters and parking stands from Thai Airways International (THAI) at Suvarnabhumi airport.

Deputy Prime Minister Wissanu Krea-ngam, who heads a committee on THAI's problems, said on Thursday the airline raised the issue at a recent meeting.

Airports of Thailand said it was taking back some of the counters and parking stands to reflect planned cutbacks in THAI flights out of Suvarnabhumi, its hub airport, after the airline resumes operations in August after months of suspension because of the Covid-19 pandemic.

The carrier, which has a massive 244 billion baht in outstanding debt, has filed for rehabilitation with the Central Bankruptcy Court.

Mr Wissanu said THAI has asked the panel for help as the recall of facilities may be excessive.

Since THAI lost its status as a state-owned enterprise (SOE) following the sale of the Finance Ministry's stake in the airline to below 50%, it no longer holds privileges over the use of facilities and equipment at the airport, said Mr Wissanu.

The carrier is treated just like any other commercial airline, the deputy prime minister added.

THAI has up to four rows of check-in counters at Suvarnabhumi airport. The AoT is taking back more than half of them as the airline reduces its capacity for the rehab programme, which will mean flying less planes to less places.