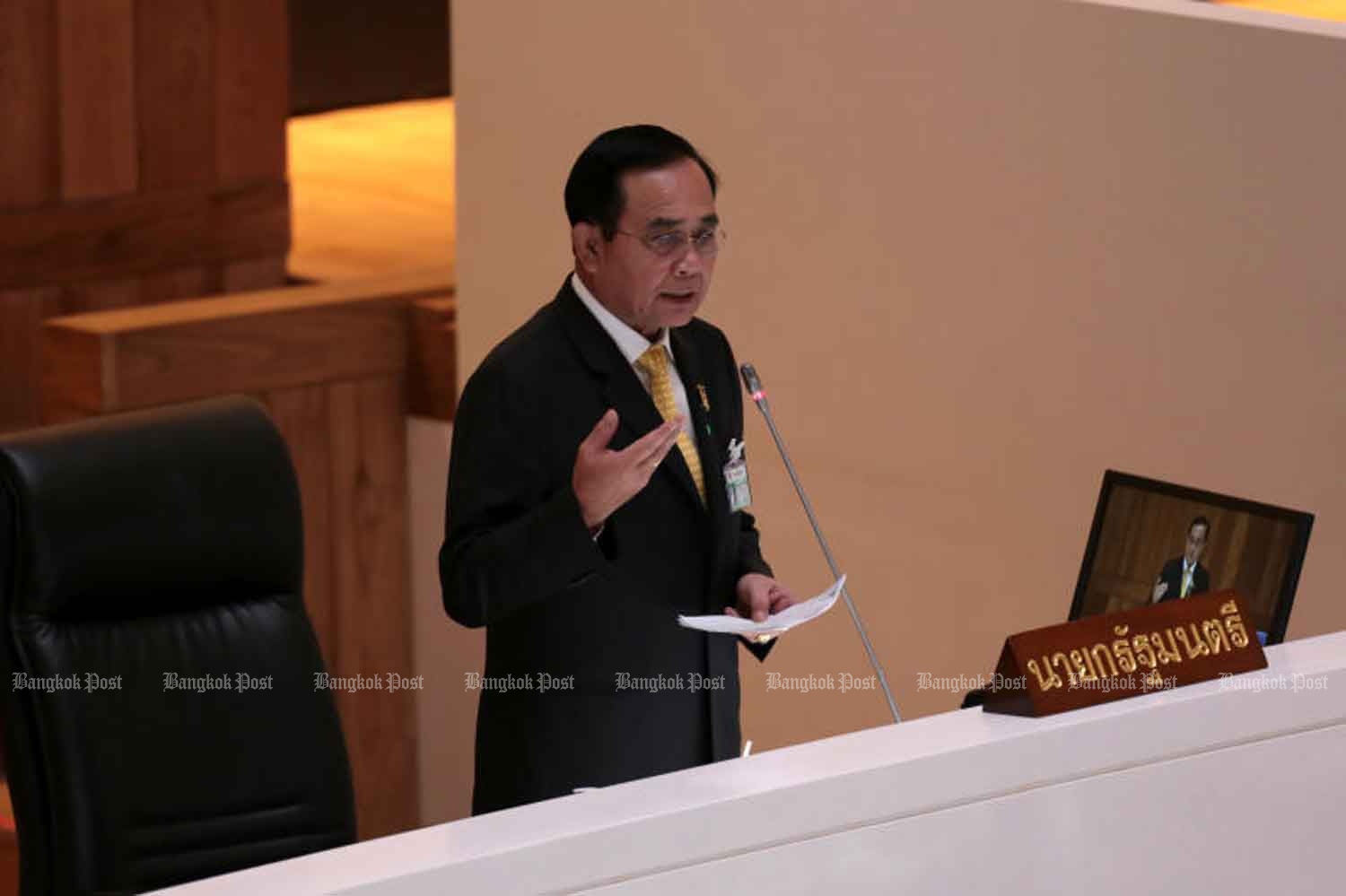 Prime Minister and Defence Minister Prayut Chan-o-cha elaborates on the 2021 budget bill at the parliament in Bangkok on Wednesday. (Photo: Chanat Katanyu)

Prime Minister Prayut Chan-o-cha is defending the decision to include the procurement of weapons for the armed forces in the budget bill for 2021, after opposition criticism during Wednesday's first reading in parliament.

Opposition members took turns debating whether the Defence Ministry should have a 223.4-billion-baht budget next year. The amount is part of the government's 3.3-trillion-baht budget for fiscal year 2021.
The opposition wanted the armed forces to stop the procurement of weaponry, including submarines, saying the defence budget should be cut to help solve the kingdom's economic problems and other contingency plans in the aftermath of Covid-19.
However, the prime minister later insisted that each arms procurement project takes several years to complete as military hardware takes a long time to produce and import. He also said these projects involve a substantial amount of funds.
"Because we have not received a lot of funds lately to buy new weapons and other military hardware, about 70% to 80% of existing ones are old and need to be replaced," Gen Prayut said. "Doing so would cut the high costs of maintenance."
"Our mission is to protect the country's sovereignty along the borders, and we have to be prepared for any new skirmishes or fights, no matter if they happen or not," he added.
Aside from building up arms for any security threats, the armed forces will also need updated weaponry to fulfil their security cooperation obligations with other countries, Gen Prayut argued.
He said military technology constantly gets updated, and it is important for the kingdom's armed forces to have modern arms.
Gen Prayut said the number of military personnel is one third of what it used to be because the government had already decided to cut the defence budget. He also defended the government wanting a 3.3-trillion-baht budget bill for the fiscal year, saying more money is required to fund the government's efforts to shore up the economy hit by the coronavirus pandemic.
He invited the opposition to submit detailed proposals of what it thinks should be changed in the bill for the government to consider.
Opposition leader Sompong Amornvivat on Wednesday accused the government of adopting old-fashioned methods of budgetary planning that focus more on old projects that do not fit the current needs of the country, such as construction and canal dredging.
The government should have focused more on projects to help emerging businesses catch up with changing consumer behaviour and upgrade agricultural products, said the Pheu Thai Party MP for Chiang Mai.
"The state budget is a crucial mechanism to steer and spur the dying economy, but I found no parts in this budget bill that serve this purpose," he said.
The fiscal year 2021 budget should be spent funding work skills development initiatives that are important to make the economy prosper more sustainably, Mr Sompong said. "[The budget] should never be given away for the government's political interests or to woo voters," he added.
"We no longer want to see the government give out cash to encourage the people to travel more -- and through those state welfare cards, which will, in the end, benefit businesses closest to [the government]."
Anudith Nakornthap, Pheu Thai secretary-general, said he did not believe the government would be able to collect 2.6 trillion baht in tax revenues to fund its 3.3-trillion-baht budget.
He said the regular expenditure of the government has risen 2.2 times this year, while the investment budget has only grown 1.8 times.
The 40.3 billion baht set aside as a central budget to mainly fund economic recovery projects in the aftermath of the Covid-19 outbreak in Thailand is redundant as the government already has the 1-trillion-baht Covid-19 borrowing decree, Mr Anudith said.
Meanwhile, Gen Prayut also responded to questions over the decision to keep the emergency decree in place for another month, saying most people have no problems with it.