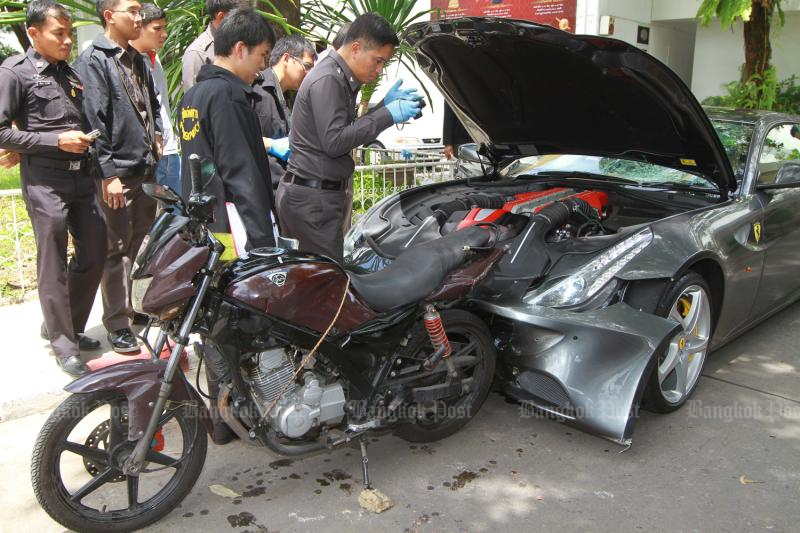 Forensic police inspect a a Ferrari driven by Vorayuth Yoovidhya following the accident on Sept 3, 2012. (Photo by Somchai Poomlard)

New witnesses who made statements that Vorayuth "Boss" Yoovidhya did not drive his Ferrari over the speed limit and that the policeman who was killed cut in front of his vehicle are the key factors which made prosecutors drop the charges.

In a leaked document outlining public prosecutors' reasons for their decision to drop the charge against Mr Vorayuth of reckless driving causing death, information from the new witnesses was given more weight than previous evidence, including forensic results.

The document said Nate Naksuk, as acting attorney-general, signed the order to drop the charge.

After the statute of limitations of three charges expired, the National Legislative Assembly's committee on justice and police affairs petitioned the Office of Attorney-General (OAG) for a fair investigation over the last charge, prompting the attorney-general to step in.

Mr Nate reviewed the investigation results and came to the conclusion the new evidence presented enough grounds to revoke the previous indictment order.

Police initially found the speed the suspect's Ferrari was travelling at was an average of 177 kilometres per hour at the time of the hit-and-run.

The speed was beyond the legal limit of 80km/h and this led prosecutors to determine that Mr Vorayuth was driving recklessly.

Two new specialist witnesses, police majors, inspected the damage to the Ferrari and the victim's motorcycle, compared it to other accidents, and agreed the Ferrari could not have been travelling at 170km/h at the at the time of the crash and was not exceeding 80km/h.

A university engineering lecturer was brought in to calculate the speed of both vehicles involved in the crash in 2017. He told investigators the Ferrari was likely travelling at 76.175km/h.

In December last year, two other witnesses were interviewed. They told investigators they were driving behind the suspect and the victim just before the accident happened.

The victim was travelling at no more than 20km/h [as shown in CCTV footage] while Mr Vorayuth was driving between 50-60km/h.

Prosecutors said the crash was a "force majeure" and that "the victim's reckless driving contributed to the crash".

The prosecutors concluded the crash was not caused by reckless driving by Vorayuth.

The decision reversed the prosecutors's earlier decision to indict. The family of the victim reached a compensation agreement with the suspect.