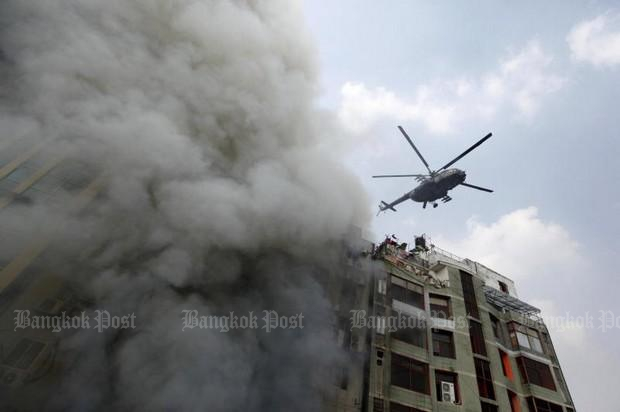 Helicopters were called in to tackle the blaze in the 22-storey building in Dhaka's business district. (AP photo)

DHAKA: The death toll from a horrific blaze that ripped through a Bangladesh skyscraper this week rose to 25, including some who jumped to their deaths.

A day after flames tore through the 22-storey FR Tower in Dhaka, trapping hundreds of office workers, police said they intended to talk to the owner of the building as part of their enquiry.

Some of those stuck inside made it to safety by sliding down cables on the side of the building, but as shocked onlookers watched, others took their chances and jumped in a bid to escape the smoke and heat.

At least six people died in this way, officials said.

The fire department intially put the death toll at 19 but police said Friday that six more had died in the fire.

Police also wanted to speak to the owner of the building after authorities alleged the tower lacked adequate safety measures.

The fire started on Thursday afternoon in the upmarket Banani commercial district.

Helicopters were called in to tackle the blaze in the 22-storey building.