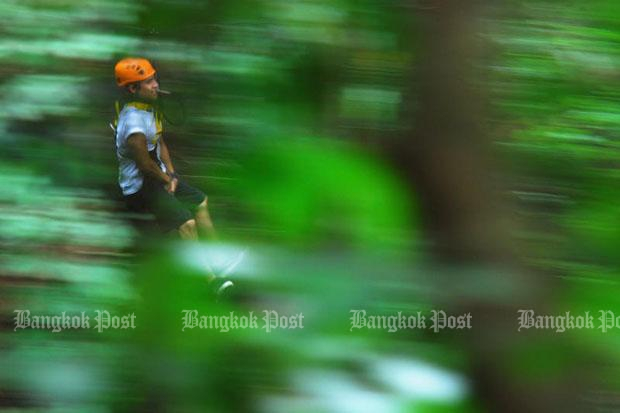 This file photo shows a tourist riding the Flight of the Gibbon zipline in Chiang Mai province. (Photo by Peerawat Jariyasombat)

CHIANG MAI: A Canadian tourist plunged to his death from a zipline at Mae Kampong village in Mae-on district of this northern province on Saturday, according to a local media report.

Suthep Saenmongkol, the Mae-on district chief, said the accident occurred late on Saturday morning at the zipline operated by the Flight of the Gibbon Co.

He identified the Canadian man as Spencer Charles, 25, who travelled to Thailand in a group that included his girlfriend. They stayed together at a lodging on Chang Khlan road in Chiang Mai city.

Initial reports said that shortly after the Canadian, who weighed about 125 kilogrammes, was released from the start of the zipline, the cable disconnected and the man plunged about 100 metres to the creek below.

Mr Suthep said an investigation was underway to establish the actual cause of the accident. The zipline operator had accepted full responsibility for what happened, he added.

Later on Saturday, Chiang Mai deputy governor Komsan Suwan-ampa said the body of the Canadian tourist had been brought to Maharat Hospital, awaiting his father's arrival to take the body back to Canada.

The case against the zipline operator is being handled by tourist police and the director of the tourism and sports office in Chiang Mai.

He said Pol Maj Sakarin Wiratkasem, a Mae-on police investigator, had informed the Canadian Consulate in Chiang Mai of the accident and asked it to contact the dead man's relatives, who are expected to arrive on Sunday.

Serious injuries have occurred previously at the zipline, operated by Flight of the Gibbon Co.

In September 2016, three Israeli tourists were injured in a fall. In December that year, the Huay Kaew tambon administration organisation (TAO) issued an order for the company to suspend its service indefinitely for safety checks and reported it to the Chiang Mai governor.

In 2017, the then Forest Department director-general inspected the zipline and found it had partly encroached on a state forest. He ordered the company to dismantle some of the zipline installation and remove the part that encroached on the state forest, leaving only the remaining part in operation.