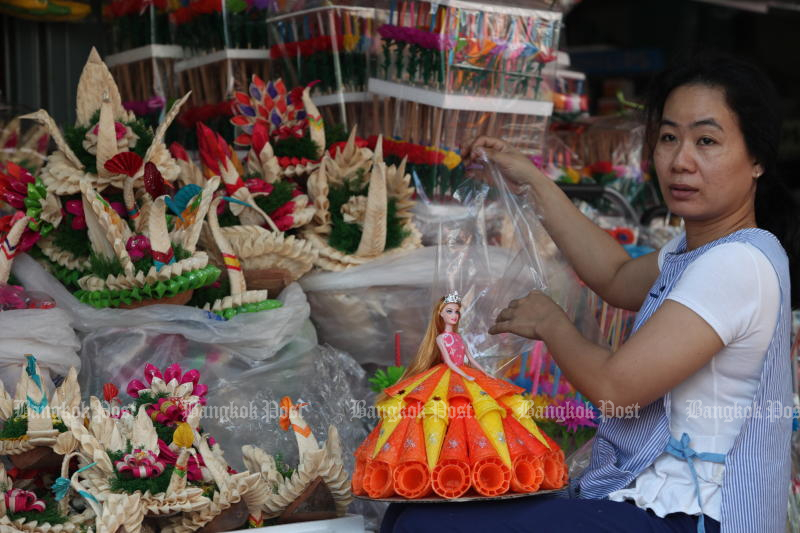 Krathongs are offered for sale at the Pak Khlong Talad in Bangkok in early November. (Bangkok Post photo)

A majority of people reject a suggestion that Thais avoid floating krathongs -- containers made of leaves but often including non-biodegradable materials -- during the traditional Loy Krathong Festival, and instead collect trash from rivers and canals, according to a survey conducted by Bangkok University, or Bangkok Poll.

The poll was conducted on 1,213 people across the country to gauge their opinions about the suggestion. The pollster did not say who floated the idea.

A total of 63.9% of respondents rejected the suggestion, while 36.1% supported it.

Of the 63.9% against the idea, 51.3% said Loy Krathong is a Thai tradition which should be kept; 7.1% said it has long been regarded as part of Thai identity; and 3.3% thought it wasn't a big deal because Loy Krathong takes place only once a year.

Of the 36.1% who supported the idea, 20.3% said people should forego the festival to avoid adding more trash into rivers and canals; 13.6% said doing so would be a show of gratitude to rivers and canals; and 2% said Loy Krathong now can be celebrated by using online apps.

The Loy Krathong Festival dates back centuries and is held annually on the evening of the full moon of the 12th month in the traditional Thai lunar calendar. This year's festival falls on Monday, Nov 11.