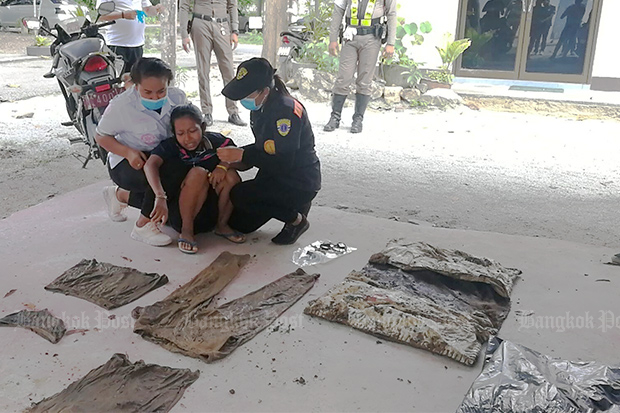 Kung Plodkaenthong collapses after identifying the personal effects of her late husband at Na Mom police station in Na Mom district of Songkhla province on Sunday. (Photo by Assawin Pakkawan)

SONGKHLA: A man has admitted he killed his own son and buried the body in a forest, police said.

On May 22, the body of an unidentified man, stuffed in a sack, was found buried in a forest in tambon Na Mom. The body was later identified to be that of Chanchai Plodkaenthong, 21, Mr Aroon's son.

Police learned that Mr Aroon and Chanchai's mother divorced about 20 years ago. After the divorce, Mr Aroon took Chanchai to live in Phatthalung's Pa Bon district where he married another woman.

Chanchai continued living in the same house as his father, his new wife and their new son. Chanchai then married a girl called Ms Kung and they had a son. All six shared the same house.

Ms Kung told police that she had an affair with Mr Aroon, her father-in-law. On April 30, Chanchai and Mr Aroon went out together but Mr Aroon returned home alone and did not say where his son was.

When Chanchai's body was found on May 22, she suspected Mr Aroon had killed his own son after arguing with him over the affair.

Police said that Mr Aroon admitted he killed Chanchai, but said it was because he was addicted to drugs and had tried to kill him on several occasions. Mr Aroon said nothing about his affair with Ms Kung, his daughter-in-law.

Mr Aroon was initially charged with murder. The investigation was continuing.