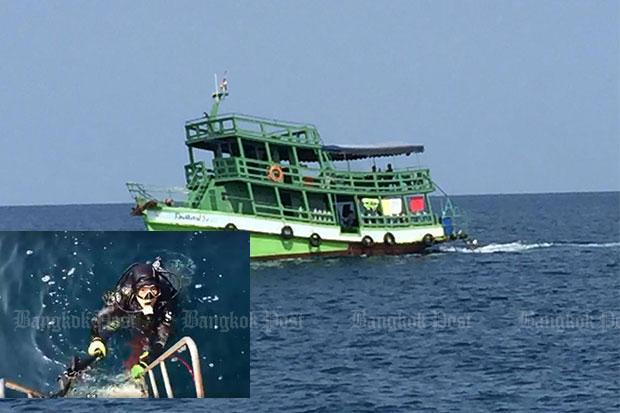 This man (inset) and his diving companion under fire online after being seen spearfishing from this boat in Mu Koh Chumphon National Park in Chumphon province. (Photo grabbed from video clip of Tep Keerati Facebook page)

Two divers have come under fire from social media after a video showing them spearfishing in Mu Koh Chumphon National Park in Chumphon province was posted online.

The clip, featuring the pair swimming with spearguns at Hin Pae, a popular diving site, on Tuesday drew a barrage of criticism and condemnation.

The video was posted on Facebook and went viral online.

Facebook user Tep Keerati wrote: “While my boat was moored at Hin Pae at 2.43pm (on Tuesday), I saw two divers acting suspiciously. I then used my mobile phone to videotape what they were doing, and found out they were using spearguns to catch fish in the national park. It’s a shameless act doing such a thing. They had at least five big pla mor. I took photos as evidence.''

He urged people to share his post and notify authorities to take action against the two men.