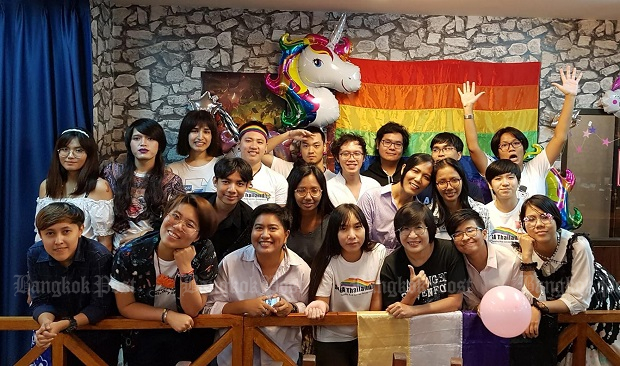 Members of the Bangkok LGBTQ+ community gathered recently to celebrate International Non-Binary People’s Day, raising awareness for a growing and underrepresented group within the LGBTQ+ community that identify outside of binary male and female gender identities and discussing one of the big challenges facing this group in Thailand - restrooms.

Bloom felt excited and happy as they sat with more than 20 other LGBTQ+ community members and allies at CUBE Space in Khlong San on Sunday July 13.

[Bloom’s preferred gender pronouns are they/them, as they do not identify as a man or a woman and the traditional pronoun choices of he/him or she/her don’t fit.]

They were listening to a presentation on non-binary gender called “Gender Unicorn.” The presentation focused on helping people at the event understand what non-binary means and why it is important to recognise and support this growing group within the LGBTQ+ community. Bloom, along with others at the event, is already very familiar with the term as they identify as non-binary themselves.

International Non-Binary People’s Day began in 2012 and this was the 2nd celebration of the event held in Bangkok. Along with a presentation on gender and non-binary people, this year’s topic was on the benefits of gender neutral restrooms and the problem of restroom discrimination among the non-binary, transgender and intersex communities.

“They’re like the toilet police!” one trans woman said about several situations where she was told by an attendant she couldn’t use the women’s restroom.

A large number of the people who came to the event shared their stories of discrimination. One of the organisers and the founder of Sexuality And Gender Acceptance (SAGA), Nitinan “Mie” Ngamchaipisit, who also identifies as non-binary, explained how they often face discrimination when using traditional male and female restrooms in Thailand.

“I am impacted by binary restrooms because I have an androgynous body and fluid gender expression. I’ve tried to use women’s restrooms but with my masculine face and deeper voice people are often shocked and some point and shout ‘This is a woman’s area.’ I’ve tried to use the men’s room and I am told ‘The women’s room is over there.’ So now I have to check myself before choosing a restroom. Do I look more feminine today? I’ll use the women's restroom. Do I look more masculine? I’ll use the men’s restroom and hope no one says I am not allowed. Mostly, I choose to not drink much water and pray that I won’t need to use the public restroom.”

This problem also affects members of the transgender and intersex communities. Several trans people at the event said they have been questioned or not permitted to enter their preferred restroom because they do not “pass” or because of their gender expression. Atitia “Ubib” Chopara, a transgender activist and political science student at Chulalongkorn University, said that she has heard of many trans women in Thailand who have not been allowed to use female restrooms.

“If you look ‘beautiful’ or like a cisgender woman, no one will say anything to you, but if you are not able to “pass” there are many cases where people have been discriminated against in Thailand and not able to use the correct restroom,” Ubib said.

Several other trans and intersex people at the event said they had been asked invasive questions or to present their ID card when trying to use the restroom, often being denied entry if the gender on the card did not match their gender identity.

There are currently no protections for transgender and non-binary individuals who wish to use the restroom which conforms to their gender identity in Thailand.

Bloom hopes that Thailand’s LGBTQ+ community and non-binary people like them will find more acceptance and support in Thailand through events like this one. They said that this kind of public awareness event is a good start and a stepping stone to not just raise awareness about non-binary identity, but also to address the on-going discrimination that non-binary and transgender individuals are facing in Thailand.