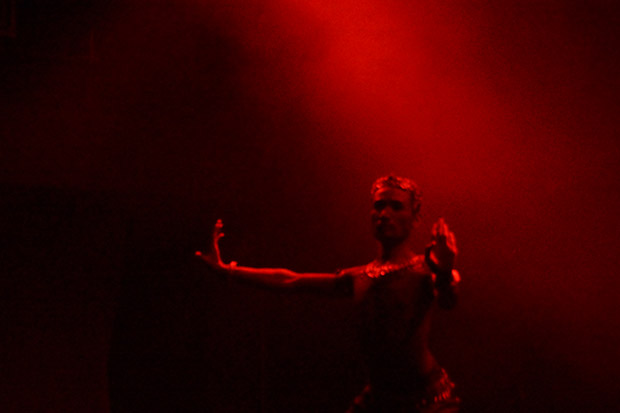 Prumsodun Ok has broken many rules. The Khmer-American artist studied classical Cambodian dance -- an art dominated by women. He then founded the first gay dance company in Cambodia, Prumsodun Ok & Natyarasa. He and his company perform Cambodian dance in costumes designed to expose more skin than the traditional ones. They also dance male and female parts.

The company performed Beloved last weekend at Thong Lor Art Space as part of the first Bangkok Theatre Festival Asia Focus. The festival served as a lead-in to the major Bangkok Theatre Festival that usually takes place in November. Beloved was the only performance from outside of Thailand. The festival, which ran from May 26 to June 4, also featured veteran Thai stage artist Pradit Prasartthong's Len Likay: Play Of My Life and a collaboration between Jaturachai Srichanwanpen and Tan Shou Chen, two young artists from Thailand and Singapore, in Open Waters.

Beloved depicts the sexual union between the king and the naga, a nightly ritual performed to bring fertility to the kingdom. The dance begins with the solo of the naga, waiting for the arrival of the king. We then meet the king as he travels to meet his beloved. They eventually unite to perform their ritual.

Watching men dressed up as women -- in long wigs and skirts -- is nothing shocking in Thailand. In fact, Beloved is at once familiar and foreign. Cambodian classical dance is very similar to Thai classical dance in terms of movements, music and costumes. Ok uses three languages in the performance with no surtitles: English in the voice-over of the two main characters, Khmer singing and Japanese-Sanskrit Buddhist chanting.

But the audacity and radicalness of Beloved is undeniable even in Thailand. The dance goes beyond gay men executing beautiful movements that are more commonly taught to women in Cambodia. The choice to expose the torsos of all the dancers instead of concealing them under gender-specific costumes underlines the fact that these are gay men's bodies.

Ok also rewrote the ritual into a love story between two gay men. The voice-over soliloquies and dialogues between the lovers, gorgeously written by Ok and recorded in a male voice, are filled with unabashed longing, desire, love and affection. And although the naga is dressed as a woman, the male pronoun is used to refer to the character, which I find to be one of the boldest things about the production.

When the lovers dance together, too, they are physically close and intimate. In Thai classical dance, because of the elaborate and heavy costumes, moments of love and desire never feel quite as passionate. Ok's choreography doesn't symbolise love and intimacy. It shows those feelings plain and simple. It lingers and explores those moments of human connection without shyness.

The most triumphant moment in Beloved, for me, was when the lovers bowed down to the divine to receive blessings for their union. The dancers surrounded the couple in celebration; there was Buddhist chanting and emphatic drumming. It not only felt religious and sacred. It looked and felt like a marriage.

Despite its brave departure, Beloved is not a punch in the face. It entertains, and perhaps convinces, with its beauty and tenderness. Yet its message is plainly spoken, without timidity, without flinching.