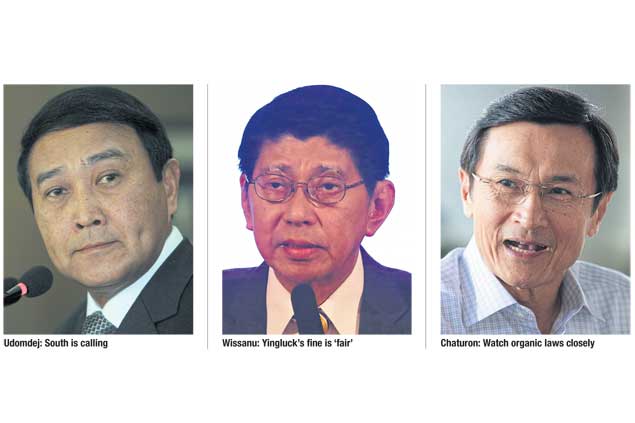 Gen Udomdej has weathered a lot of storms, but his biggest test is coming v The rice scheme net is widening after Yingluck's bill of 35.7 billion baht v The waters are still a little muddy over the power of the next Senate

The military regime has set up a cabinet forward command centre to coordinate efforts to bring peace to the South, but Deputy Defence Minister Udomdej Sitabutr is unhappy about being tipped to lead the new centre, sources say.

The steering committee for resolving problems in the southernmost provinces will integrate the work of the Internal Security Operations Command (Isoc) and the Southern Border Provinces Administrative Centre (SBPAC).

The order to establish the committee, issued under Section 44 by Prime Minister Prayut Chan-o-cha in his capacity as National Council for Peace and Order chief, was published in the Royal Gazette and took effect on Sept 15.

The prime minister will appoint specialists with experience in handling southern issues to coordinate work between the cabinet and other central government agencies and local organisations in the provinces, the order said.

They will be called "special representatives of the government" and will serve as members of the new steering committee.

According to sources, a number of retiring security and military officers currently handling southern border issues are expected to be appointed to the centre. Some retired officials with a track record in the South are also being considered.

A security source said Defence Minister Prawit Wongsuwon has assigned Gen Udomdej to head the centre and it will be put to the cabinet soon.

Others tipped to sit on the panel include assistant army chief Kampanat Ruddit, and SBPAC outgoing secretary-general Panu Uthairat.

The source said Gen Udomdej is not happy. During his time as army chief, Gen Udomdej led efforts to tackle the southern unrest in 2014, and tried to integrate the operations of all security agencies, but made little headway.

The new initiative might seem a case of deja vu for Gen Udomdej, with a slight difference of a forward command, the sources said.

Gen Udomdej survived the scandal surrounding the Rajabhakti Park project after the National Anti-Corruption Commission declared its construction was graft-free.

Then, when reports emerged of a cabinet reshuffle, Gen Udomdej was tipped to be shifted out. Still, he managed to keep his deputy defence minister post.

Gen Prayut has now hinted at the possibility of a fresh cabinet shake-up, but it remains to be seen whether it will be a minor shake-up or a major one.

With that hanging over his head, Gen Udomdej seems to have been offered another chance with the new forward command so he can prove he is capable of being in the cabinet, according to the sources.

Remaining in cabinet and restoring his reputation now depend on his successful handling of this new assignment, the sources said.

Former prime minister Yingluck Shinawatra, who is being held responsible for the rice-pledging scheme fiasco, is facing reimbursement costs of just 20% of the total fine for the damages arising from the 2013-2014 rice crops.

The 35.7 billion baht was decided by a panel tasked with pursuing civil liability claims against state officials in connection with losses in the rice-pledging scheme. It is chaired by Manas Jamveha, director-general of the Comptroller-General Department.

Some of Ms Yingluck's staunchest critics have found the fine to be grossly underestimated and are demanding an explanation.

The amount is a huge drop from an earlier finding by another committee chaired by the deputy permanent secretary at the Prime Minister's Office, Jirachai Moonthongroy, which probed allegations of negligence of duty by Ms Yingluck. The Jirachai panel determined that she was responsible for losses incurred across four rice crops -- from 2011 to 2014 -- and should pay restitution of 270 billion baht.

Deputy Prime Minister Wissanu Krea-ngam has insisted that the 35.7 billion baht is a fair amount considering that Ms Yingluck is being held to account for negligence of duty, not corruption, for failing to heed warnings about the disaster during the 2013-2014 rice crops.

The National Anti-Corruption Commission (NACC) ruled 7-0 in 2014 that there were sufficient grounds to the allegations that Ms Yingluck was negligent in failing to scrap the pledging scheme as she knew that it was plagued by corruption and huge losses.

It recommended that Ms Yingluck, who chaired the National Rice Policy Committee when she was premier, be indicted for dereliction of duty in failing to deal with the alleged corruption and losses in the rice-pledging scheme. The charge is now being heard in the Supreme Court's Criminal Division for Political Office-Holders.

With Mr Wissanu's explanation comes another question: Who is going to pay the remaining 80%, or 140 billion baht, of the fine? Only Ms Yingluck has been investigated by the NACC whose ruling resulted in the civil liability action against her.

Concerns are being raised about the Finance Ministry being obliged to let the 140 billion baht remain unaccounted for.

The Comptroller-General Department has tried to calm these fears by pointing out that other stakeholders will be held responsible, with the Finance Ministry setting up a panel to find out who else is liable for the massive damages caused by the rice-pledging scheme.

In a fresh investigation, potential suspects range from concerned cabinet ministers to state officials to private operators such as rice millers and warehouse operators, according to a political source.

Based on the NACC inquiry, the rice-pledging scheme has been found to be riddled with graft at every level, such as the rigging of weighing scales, unauthorised transfers of rice stocks from storage warehouses, secret rice auctions, and cronyism.

Once the investigation is concluded, the findings will be submitted to the committee tasked with pursuing civil liability claims which will determine the ratio of financial responsibility and compensation.

Some can't help but wonder how long it will take before civil action targeting so many suspects can be taken.

If a remark by government spokesman Sansern Kaewkamnerd is anything to go by, the government seems to have a place to start.

According to Lt Gen Sansern, the cabinet has already assigned the Centre for National Anti-Corruption to bring together law enforcement agencies to investigate those suspected of committing offences.

An initial probe has found state officials and private operators involved in more than 850 irregular cases in connection with the rice-pledging scheme in 33 provinces.

Next premier issue rages on

The power of the next Senate, which is to be appointed by the junta, has been an emotional topic of debate since the draft charter was in its infancy, with much talk about how it will lead to an open invitation to a non-elected person to become prime minister.

The core issue that divided opinion centred on whether the Senate should have any say at all in the selection of an outsider as premier. The National Legislative Assembly (NLA) wanted to settle that question once and for all by posing an extra question in the charter referendum on Aug 7.

As it turned out, the people approved the extra question, effectively giving the Senate the power to join in the selection of the prime minister. However, that wasn't the end of the story as interpretations abounded that the Senate, chosen by the National Council for Peace and Order, could also enjoy the power to pick candidates as well.

The issue begged for a ruling by the Constitutional Court, and this week it decided -- after taking into account the people's wishes -- that the Senate's role would be limited to a co-vote with MPs on the candidates. The Upper House must leave the work of sourcing the candidates to the MPs.

But critics are pressing for a clearer explanation on what will happen if MPs are unable to choose a prime minister from among the candidates entered in the lists presented by political parties (which have won at least 25 Lower House seats).

But to avoid a stalemate, the restricting of candidates to lists could be "switched off" to allow for outside nominations -- but this, the Constitutional Court determined, would rest on a joint decision of the two houses. Prior to this, the draft charter stipulated only MPs could suspend the rule.

The decision by the Constitutional Court supporting joint power to override the rule, however, sparked curiosity as to whether the Senate has now been awarded augmented power.

In the past, some politicians felt that suspending the rule served the eventual purpose of sourcing candidates, and it was not the Senate's responsibility.

Chaturon Chaisaeng, the education minister under the Yingluck Shinawatra administration, said the Constitutional Court has made a broad ruling over the issue. The court intended to hand down a decision that would ensure that the draft charter complies not only with constitutional rules, but also the wishes of voters in the referendum.

Mr Chaturon said the referendum gave power to parliament to select a prime minister. He said he believes the NLA has played a crucial part in ensuring that there will be an outside prime minister.

On Thursday, Chaikasem Nitisiri, a former attorney-general and Pheu Thai Party executive, expressed concern that the court's ruling will pave the way for a prime minister who is not a political party candidate.

Mr Chaikasem said the ruling opens the way for an outsider PM to stay in power for two consecutive House terms, or eight years.

Add in the usual extra time involved in preparing for an election, and the people may find that they have this PM holding the reins of power for up to 10 years, he added.

The content of these drafts could weaken the ability to resist an outsider prime minister, Mr Chaturon said.