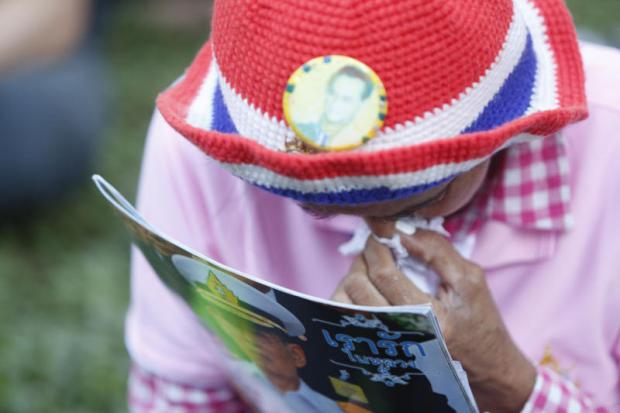 A woman joins the crowd at Siriraj Hospital and weeps as she learns of His Majesty the King's passing on Thursday. PATTARAPONG CHATPATTARASILL

The announcement is coming; the same message bombarded my many Line chat rooms on Thursday afternoon. My hands trembled; my heart knew the unspeakable; tears started to well up and roll down my face: the country's worst fear was now a reality. My daughter called. I couldn't talk. "Are you all right?" she asked. I choked. "It's all right," she tried to console me. No, it's not all right. No.

I grew up in a Thailand my daughter does not know. Thailand was then under the spectre of the Cold War. Real bloody wars raged inside and outside the country. Communism was at that time an evil force against the Free World, which Thailand chose -- or was forced by geopolitics -- to side with. The stakes were high and small people on both sides fell like leaves in the name of political ideologies.

Today's younger generation, like my daughter's, cannot understand what it was like back then. How could they? China -- formerly the Red Menace, the most evil of all evils -- is now Thailand's top political ally as the West frowns upon the military regime. The US -- formerly Thailand's best friend -- now faces widespread anti-American sentiment in the country.

The world has changed. Russia has become a popular tourist destination; so have Vietnam, Cambodia and Laos. The fall of Saigon? The death of Laos' king? The Killing Fields? What Killing Fields, they ask? Cambodia, Vietnam and Laos are now part of our regional trade pact. No, they would not understand.

Amid those uncertain, dangerous times, I grew up seeing His Majesty the King and the Royal Family visiting every part of the country to reach out and help the poor -- a modern monarchy open to people's plight, a compassionate King using all his resources to win the war on poverty. It's the only kind of monarchy we know, love and revere.

The Western media often describes HM the King as the country's stabilising factor amid the country's political turbulence. He was much more than that to us Thais.

After seven decades under his reign, Thailand has gone through dramatic changes. From a sleepy country and economic backwater, it is now a middle-income country -- with boom and bust behind it. The country went from military dictatorship to half-baked democracy and now back again to extended military rule -- with so many coups one no longer cares to keep count in between.

Electoral democracy has opened up society, expanded the economy and the economic and political aspirations of the middle class. But it has failed to usher in a fair and just society. The mandarins still fiercely hold on to central control, suppressing people on the ground while supporting businesses that exploit the environment for short-term gains.

Disparity widens as social and political discontent heightens. Corruption has become the norm, even in the clergy. Material wealth may have improved all around, but morality is declining across the board. We ask: Is there any good left? Any sanctity left?

Call it irrational, but don't we all want to believe that good people exist? That even when we are forced to put our morals and ethics aside amid cut-throat competition, are we still not so bad after all?

But every time we saw the King travelling to rugged terrain across the country to help the poorest of the poor, we knew goodness still existed. Every time we saw him sitting on dirty ground talking to villagers, asking them about their lives and their needs, we knew that boundless, indiscriminate compassion was still there.

Though we may put our values aside when pushed by cut-throat competition, when we know we are loved by such a great person, such a great King, we can't be that bad after all, can we? The King helped us feel good about ourselves. He restored our self-respect. That's why we love him so much -- because we love ourselves.

What to do now that we no longer have the father figure who truly loved us, the symbol of goodness, the spiritual guidance, the country's last unifying force? Grow up. That was the first thing that came to my mind.

We should act like adults and open our minds; look at changes in the world. There are a lot of examples out there showing us how the country can navigate through political conflicts, and balance the old with the new.

Actually, we don't have to look that far. Throughout his reign, the King provided us with plenty of examples and advice. Work for unity. Talk. Don't fight. Be reasonable. He kept telling us this time and again in his royal speeches. But look at what we have done to our country in the past decade.

A visionary king, most of his royal projects focused on how to restore the environment. His working principles: listening to people on the ground, paying attention to different ways of life and topographies, and engaging people to promote change. This way of thinking is what the world now calls sustainable development.

Like his development initiatives, the King's many innovations -- from royal rain-making to biofuels -- are based on cost-effective technologies. They are all people-centric projects. The forests, for example, are being restored to sustain local people's livelihoods. The King also urged that indigenous people's rights be respected. Which came first, he asked, forest communities or the forest law?

State authorities praise the King's ideas, but this is what they do: evict forest dwellers, burn their wooden shacks, rent out forest land to tree farm investors, and harass forest communities that demand co-management of local resources.

When the country was hit by economic meltdown in 1997, the King urged a rethink of mainstream economic development based on ruthless exploitation of the environment and small people. Food security, low-risk and cost-effective investments, self-reliance, and protection of the environment should be the goals instead -- as should contentment and simplicity instead of greed.

The King's economic philosophy became a state mantra, but unfortunately an empty one. For every government, it is business as usual: Talk of sustainability both at home and abroad, but continue to push for megaprojects that destroy the environment and locals' livelihoods to serve business interests.

The country is now grieving, but this will subside with time. Still, my memories of the King -- and my gratitude -- will remain much stronger than the generations who have not witnessed his tireless work for the country first-hand.

How to remember our beloved monarch?

We will hear people in power asserting that they will continue his legacy by following his examples. Will this be just more lip service?

Despite the nation's deep love and reverence for him, the King was not without critics. Fair criticism, however, should respect historical context and constraints, and his deep devotion to his country and people.

The King once told a New York Times reporter that he did not care how history remembered him.

"If they want to write about me in a good way," he said," they should write how I do things that are useful." The key word here is "how."

Putting nature and people first -- that was how he did things.

Empowering people to be enact change by themselves: That was how he did things.

Our grief and love for the King may be beyond words, but not beyond our actions. Be kind to nature. Be kind to other people, especially the disadvantaged. Live simply. Give. And give indiscriminately.

That is how compassion -- and tolerance -- grows, and how changes start. That is how the King would want us to live. That is how we should remember him, so we can continue his legacy.