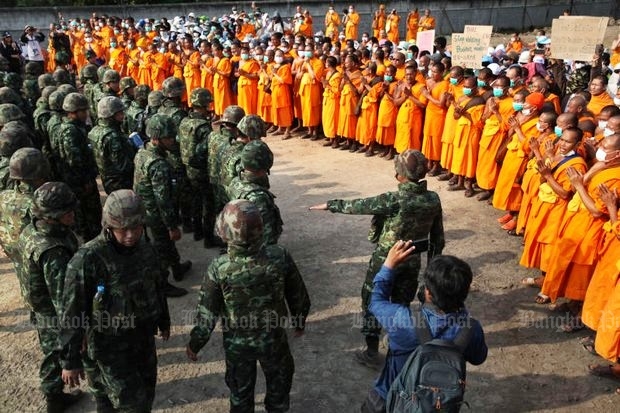 So the Dhammakaya Temple is a cult. So its leader reportedly claims to be a doomsday saviour who takes rich donors on a tour to heaven to see the Buddha. So it teaches its followers to buy premium spaces in heaven by donating to the temple. So its doctrine on the permanence of self is against Buddhism. So what?

The problem of Dhammakaya is not so much what it teaches. Very few Buddhist temples in Thailand do not cash in on superstition. But its gigantic size, extensive reach and its grand ambition to take over the whole clergy has engendered widespread public concern. Its biggest problem -- a mistake to be precise -- is taking the wrong side of the political divide.

The Thaksin card played by Dhammakaya saved its leader from a court case over temple theft in 2006. But this is 2017. The anti-Thaksin regime is determined to weed out any perceived remnants of the Thaksin stronghold. It also probably wants to revive its sagging popularity by showing its middle-class supporters that only the regime can "protect Buddhism" and get rid of the cultish Dhammakaya once and for all.

After throwing out a pro-Dhammakaya elder from the clergy's top job, and after staging three large-scale crackdowns that ended in embarrassing failure, the government vows to press on unless the Dhammakaya leader, Phra Dhammajayo, gives himself up to face legal charges of fraud and theft. The response? One suicide and signs of increasing defiance. A question arises: Who will blink first?

Now, let me be clear. I don't like Dhammakaya. I don't like it cashing in on people's superstitions and faith. I don't like how it spins Buddhist teachings, how it quantifies merit in monetary terms, how it caters to the rich, how it buys influence in the clergy and officialdom, how the temple is entangled in a web of corruption such as the Klongchan Credit Union scandal which led to Phra Dhammajayo's legal charges, and how the ex-abbot is using his supporters to protect himself which may cause violence.

But I don't think military might is the answer when you are dealing with religious beliefs -- unless you want to see blood. I don't think if you don't like anything, you have the right to destroy it either. Doesn't our constitution -- the one already endorsed by the military -- ensure freedom of religious beliefs? The regime is now caught in a dilemma. Backing off is a huge loss of face. But continuing the raids cannot promise the arrest of the fugitive abbot either.

Meanwhile, the regime's decision to fire the head of the Office of National Buddhism, believed to be a Dhammakaya sympathiser, will do little to ease resistance from the pro-Dhammakaya authorities -- and the clergy. On the contrary, it will intensify the resistance.

It is no secret that the majority of elders in the Supreme Sangha Council (SSC) are Dhammakaya sympathisers. That is why the previous supreme patriarch's ruling on Phra Dhammajayo on theft and distortion of Buddhism -- which deserved defrockment -- was never implemented. Instead, the SSC ruled to absolve Phra Dhammajayo.

It is also no secret either that a large number of temples and monks have been benefiting from financial support from Dhammakaya for decades, thanks to the elders' poor job of providing systematic support for temples and the need for better education of young monks.

But resistance from the mainstream clergy goes beyond short-term financial gifts from Dhammakaya; they fear for their own survival.

Cleaning up temple corruption is one of the regime's agenda items to win public support when it staged the coup. We may take it as mere empty rhetoric, but for those who prosper from this oppressive and corrupt system, the talk of reform sends chills up their spine.

We may be unhappy with the obsolete and inefficient clergy, but it is the only system open for poor, rural boys to get an education and an automatically higher social status, thanks to public respect for the saffron robes. The clergy's feudal hierarchy also promises its members near-royalty status if they successfully climb up the ecclesiastical ranks. It's understandable why they want to keep this system.

The monks' fears of the domino effect are fuelled by the fact that the main drivers of the anti-Dhammakaya campaigns are the same fierce critics of the Sangha Council and ardent pushers for the Sangha's restructuring. It's why they believe that if Dhammakaya falls, they fall too.

It's also probably why an online message on the alleged attempt to amend the Sangha Act has gone viral.

The message focuses on alleged plans to restructure the Sangha Council, to dismantle the Office of National Buddhism, to combine two Buddhist universities of the Mahanikaya and Dhammayut sects, to force monks to reveal their bank accounts, to audit temple donations and to prevent monks from taking temple donations as their own. Interestingly, the message also claims alleged proposals to force monks who graduate from the monks' universities from leaving the monkhood.

Whether true or false, this viral message reflects the clergy's deep concerns. Or could it even be a ploy to instigate monks to protest against the junta? Indeed, can it cope with the 300,000-strong clergy and millions of Dhammakaya supporters combined?

What lies ahead? Ostracising the controversial temple for distorting Buddhist teachings? This is highly likely. This helps calm public fears of the Dhammakaya taking over the clergy, but the government needs to convince SSC elders to take this step. Even if they agree, we are only fooling ourselves in thinking the move will help "purify" Thai Buddhism -- as claimed by the anti-Dhammakaya camp.

In fact, the idea of purifying Thai Buddhism itself is questionable. Please tell me who has the moral right to judge what is "true" or "fake" Buddhism? The clergy? The elders who are completely irrelevant to today's world? The monks who are loyal to racist nationalism as opposed to the Buddha's teachings of tolerance and compassion? The male-dominated system which looks down on women? The so-called Buddhists who -- despite their claims to be "true" Buddhists -- mocked with glee when a Dhammakaya supporter hanged himself to protest the raids? Is hate part of their Buddhism?

What to do to get out of the Dhammakaya debacle? A better question is how to make Thai Buddhism more relevant to society.

While transparency regarding temple donations is necessary, it's not enough. The same goes for efficient temple management. As long as the top-down feudal structure remains, monks will continue to seek feudal perks and privileges, leaving their spiritual mission and the poor behind.

As long as the clergy can still depend on state subsidies and political support, they will refuse to fix their flaws. The public will continue to be frustrated with the clergy and -- if Dhammakaya no longer exists, which is not likely in the near future -- people will still seek new religious groups that can satisfy their needs. And as long as the SSC retains authoritarian control over the whole clergy, there will always be attempts to infiltrate the SSC, which is very easy given its weakness.

The government is partly to blame. In a departure from previous charters, the new one by the military regime promises special support for Theravada Buddhism. It also promises punishment for those who "destroy" Buddhism, an easy tool to punish dissent.

To prevent the likes of the Dhammakaya, the government should only focus on setting up effective mechanisms to ensure transparency of temple donations and management with community and civil society participation. It should not touch the "faith" dimension. Nor the teachings. Let the people decide. Nor should it lend support to Theravada monks specifically, which perpetuates dependency and incompetence.

Monks need to learn how to "swim" in the open sea of highly competitive markets for faith to regain public trust. Buddhism teaches the path toward inner peace. Live that path to prove it's possible. It's the only way to become relevant to society again. It's easy if monks let go of greed.