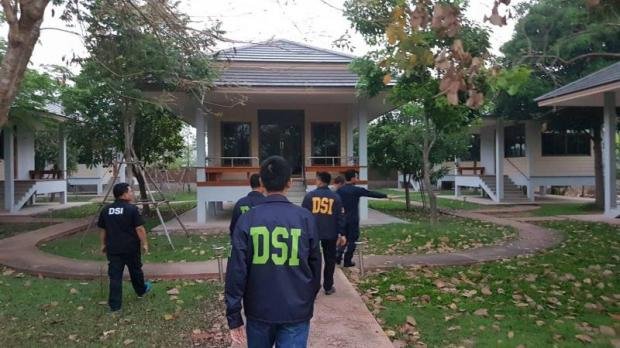 The DSI took one more turn Sunday to search 'Aram Parisutho' and then declared an end to the 23-day siege of the Dhammakaya temple's grounds.

The 23-day siege of Wat Dhammakaya led by the Department of Special Investigation (DSI), which ended abruptly on Friday afternoon, has left many of us wondering whether the DSI succeeded in its mission.

That depends on what you consider the real objective of the mission was.

To many of those who despise the Dhammakaya cult and its mentor, Phra Dhammajayo, the DSI's mission was a big flop.

Authorities understood or were led to understand that the siege was intended to search the temple and arrest its elusive ex-abbot, who was believed to be hiding in one of the buildings in the sprawling 2,000-rai property.

The reactions of the public expressedto the Manager news site's internet forums in the aftermath of the announcement by DSI head Pol Col Paisit Wongmuang that the siege was over ranged from feelings of disappointment to anger and betrayal.

That is because they believe that the DSI or, in other words, the government must, once and for all, arrest Phra Dhammajayo and put an end to the Dhammakaya cult.

At the press conference on Friday to announce the end of the siege, Pol Col Paisit said that the number of people charged and issued with summonses and arrest warrants came to more than 300.

He said that the searches had not yielded any trace of Phra Dhammajayo, but he promised that the manhunt would continue and immigration officials had been told to be on the lookout for the monk at all border points in case he tries to flee the country.

The DSI chief said most government officials will be withdrawn from the temple, leaving behind a unit to ensure security and prevent further unrest.

Also, the NCPO order invoked under Section 44 to list the temple as a "specially controlled zone" will be lifted.

To Dhammakaya opponents and many others, the "achievements" articulated by the DSI chief pale in significance to the fuss that came with the push to nab the abbot.

During the siege about 4,000 men and women were deployed by the DSI, police and military personnel, while it is estimated that about three million baht a day was budgeted for food alone.

I doubted from the very beginning that Phra Dhammajayo was still hiding in the temple. But whether the notorious monk is arrested is not as significant as clipping the wings of the Dhammakaya cult so that its followers gradually lose faith.

The Dhammakaya temple is said to have more than a million followers -- among them tens of thousands of monks, including many abbots, who each year on Phra Dhammajayo's birthday in April, are invited to the temple to be feted and showered with hard cash in accordance with rank.

During the siege, only a few thousand hardcore followers were mobilised to defy authorities while the majority kept their distance.

This was probably because they were afraid of Section 44 or, perhaps, because they had come to realise the true colours of Phra Dhammajayo -- his defiance of the law and his refusal to turn himself in to face justice -- had been revealed.

The monk, who has been stripped of his monastic rank, made a big mistake by refusing to face the law.

He decided instead to hide and run like a fugitive and let his hardcore followers form human a shield to protect them, and to spare him the discomfort he may have experienced if he were briefly detained.

Contrary to the DSI's failed attempt to have Phra Dhammajayo arrested, the move to have him stripped of his rank appears to have had a bigger impact on the sect.

It is not just Phra Dhammajayo, but the deputy abbot of the temple, Phra Tattachivo, who has been demoted.

It will take a while for someone to be appointed to the role of abbot of Dhammakaya. It is, indeed, a very challenging job for the appointee in light of the fact that many monks there are still loyal to the charismatic and influential Phra Dhammajayo.

The temple needs to be reformed just like the Supreme Sangha Council and the entire Buddhist institution.

Last but not least, executive order Section 44 is not a cure-all panacea or a magic pill that can cure every social, economic and political ill.

The prime minister should think very carefully before exercising this power in another fraught situation. More importantly, it should not be enforced half-heartedly by someone with a weak heart or it will risk turning a serious situation into nothing but a farce.