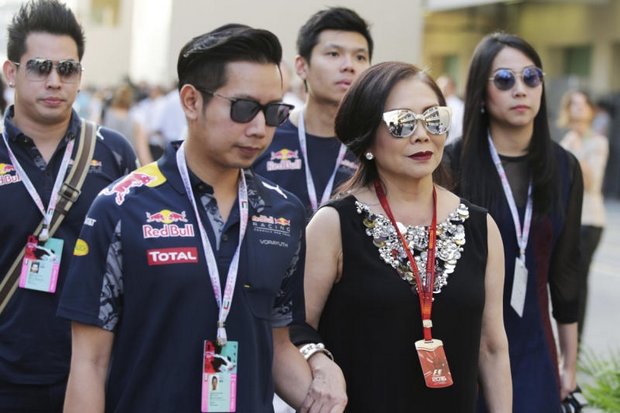 The boss walks free. The boss is the boss. The boss dines in France and snowboards in Japan. The boss rules the road and tramples the law. In the pyramid of privilege, the boss stays on top. In the food chain of injustice, the boss reminds us again, and again and again, who the boss is.

If an alien came to Earth and asked us to describe what Thailand was, tell him the story of the boss.

Like a bull charging at an unsuspecting matador, Red Bull heir Vorayuth "Boss" Yoovidhya allegedly ran over Thong Lor policeman Wichian Klanprasert with his black Ferrari in the morning of Sept 3, 2012. Five years later, he still refuses to meet the prosecutors. Five years later, the boss is still "too busy". His brilliant lawyers are clearly performing some kind of legal legerdemain to delay the meeting, and what hurts us most -- us the people who could any day be trampled over by the rich kids of Bangkok -- is that the prosecutors seem blase about the whole thing.

On Thursday the Office of the Attorney-General, insisting that they're on the ball, postponed Boss's summons for the sixth time to April 27. Mr Vorayuth, now 32, claimed he was busy in the United Kingdom. We never doubt for a moment how busy he must be after the AP report showing him jet-setting around the world, dining, wining, pool-dipping, merry-making, and loving every minute of his life spent in the cocoon of entitlement.

The whole Boss saga was enraging enough. The case doesn't seem that complicated. There were witnesses and plenty of evidence. The victim was a policeman. The attempt to stall the case is blatantly obvious. What makes it even more enraging, however, is when we think about people who've been thrown in jail from far murkier circumstances and how alert and fast-moving the law seems to work in those cases -- the cases involving people stuck in the lower strata of the justice food chain: the teacher jailed for running over a man though it came to light that she wasn't the driver; the janitor who was convicted wrongly for robbery and who met the real perpetrators in jail (the culprits wrote letters to the court out of sympathy for the janitor); the old couple convicted for encroaching national forest for the simple act of picking wild mushrooms. The list goes on.

And of course, Jatupat "Pai Dao Din" Boonpattararaksa has been locked up for three months for sharing an online article. The court has repeatedly denied Pai's bail with the same frequency as Boss the Bull has postponed his meeting with the law. Pai was jailed weeks after committing "the crime". Boss is a free man after five years.

Tell me which case involves a dead policeman?

If an alien came to Bangkok, tell him that the man-made concept of justice is fickle. For some it's a lethal injection to the head. For others its arrival can be delayed until eternity -- or until the statute of limitations expires. For Boss, he has 10 more years before the charges of reckless driving causing death go stale. For someone with money and pool villas, it doesn't seem that long.

But at least we should learn something. In 2014, Boss's legal team sent a letter to the prosecutors asking for more witnesses to be questioned. His lawyers also petitioned the National Legislative Assembly's legal and justice committee to seek fairness in the treatment of the case. Last December the prestigious, coup-appointed NLA also informed prosecutors about Mr Vorayuth's request for justice. It's not clear what has entailed from that "informing" by the committee whose function is merely advisory.

Still, does it mean anyone can now postpone the summons by petitioning the NLA, with the hope that the NLA will "inform" the prosecutors? This is a hit and run case with a dead body, and if something like this flies so smoothly with the assembly well-known for fairness, well-paid stipends and impeccable attendance, then those charged with less severe crimes -- crimes that lead to no death -- should look it up as precedent.

Unless there's no precedent. There's only the boss.

Upholding the rule of law is what the government promises us -- especially this government always claiming moral superiority. But what happens is evident: The manifest unfairness in the application of law, the relationship between wealth and delivery of justice, and the tentacles of influence that raise the elite -- the rich, the well-connected, the political class, the military -- above ordinary citizens who pay tax and wait to die on the sidewalk alone and in pain.

So the boss walks free. Everyone else just lives on the breadcrumb of justice that always arrives too late, if at all.