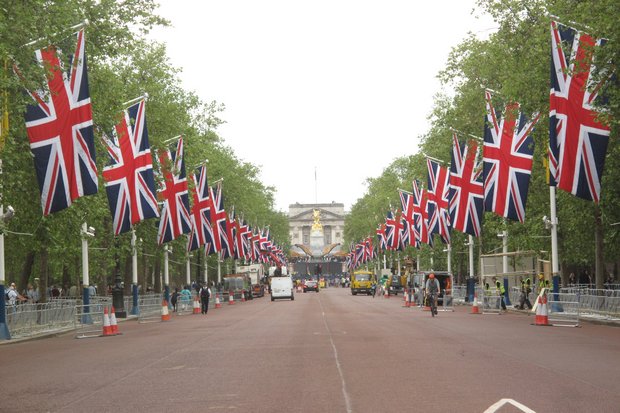 Union Jacks on The Mall in London, with Buckingham Palace in the distance. (Photo via Flickr)

Rejoice! Rejoice! The Battle of Downing Street is over. Now the Battle for Britain begins. Like lions rising from slumber, the British people have risen and dealt a mighty blow to the Leave Liars.

A Tory Party fighting on the most isolationist manifesto in its history and a prime minister who gave in across the board to the xenophobic Ukip-style hate of Europeans have been repudiated by British democracy.

Seventy-three years ago, as the democratic world rose up to save the Continent from the ravages of extreme nationalism, British soldiers stormed the beaches of Normandy jointly with American, Commonwealth and European armies and units.

Now the British people have said an emphatic "No" to the English nationalism of Ukip and the Daily Mail-Telegraph media clique. And north of the border, Scottish nationalism has been also been dealt a blow, as Scots booted out the SNP leader in the Commons, Angus Robertson, and the SNP supremacist, Alex Salmond.

Before we exult too much in Ms May's humiliation, let us not forget Labour under Mr Corbyn also bought in to core Brexit ideas. The Labour manifesto proposed imposing immigration controls on fellow Europeans that would have been incompatible with Single Market membership.

Anatole Kaletsky, chair of Best of Britain, said the YouGov poll of 1,875 voters he commissioned showed most Brexit voters including Tory voters and over 65-year-olds support staying in the Single Market.

Another question the poll asked: "Do you think our government should offer EU citizens the right to travel, work, study or retire in Britain, in exchange for EU countries giving British citizens the same rights?"

Some 62% agreed that keeping EU travel, work and retirement rights for British citizens should be a negotiating priority. This compares to 17% in favour of immigration controls applied to all EU citizens, including British passport holders, with 21% of "don't knows".

A final question combined the single market and free movement: "Do you think our government should or should not allow free movement of people between Britain and EU countries in exchange for the EU allowing British businesses full access to the Single Market?" Some 43% supported such a deal, 31% rejected it and 26% were unsure.

This shows the Tory-Labour election manifestos may have been too quick in surrendering to the line that voters last June voted to quit the Single Market and the Customs Union, as well as give up the right to retire in Spain, France and Greece or live and work in Europe without any obstacles as if living at home in Britain.

Napoleon famously sneered at the British as a "nation of shopkeepers". It is deep in the instincts of the average British citizen that we do well when markets and frontiers are open to British commerce, citizens and ideas. This should be the line of argument in the opening rounds of the Battle for Britain now that the Battle of Downing Street is over.

It should also not be forgotten that, in June of last year, there was a clear majority of Remain MPs in the House of Commons, in the two-thirds range. If anything, that majority has now gotten larger, as quite a few venomously anti-EU Tories got defeated at the polls.

Moreover, MPs from Scotland, Wales and Northern Ireland (other than Unionist supremacists) were all opposed to amputat­ing the UK from Europe. So too were most Labour MPs and more than half of Conservative MPs.

MPs should stand back and consider the wider national interest rather than looking over their shoulders.

As British voters slowly wake up to the massive economic damage leaving the Single Market and Customs Union would do to jobs, it is high time for politicians to take a fresh look.

There is also a need for a serious debate inside the Labour Party. It is clear that adopting a Brexit line on the Single Market and the rights of British and European citizens to work and live in each other's nations has made Labour largely indistinguishable from the Tories on Brexit.

Mr Corbyn must recognise that, despite his personal political triumph (which is especially impressive in view of the establishment onslaught directed at him), he largely won a protest vote. He stood up against public sector cuts, inequality, and no wage increases for a decade.

It was largely his opting for a much softer Britain that gave him his 40% voting share. In addition, Labour did best in London where Labour MPs campaigned against leaving the Single Market and Customs Union and against adopting internal migration controls.

Last year, only five very rich men provided 61% of the funds for the Leave campaign. Are there no men and women ready to bankroll a serious campaign to defend Britain and its citizens from the isolationists and the economic amputationists?

As David Davis, Theresa May's Brexit Minister, says: "A democracy that cannot change its mind ceases to be a democracy."

It is time for a new democratic campaign to defend core British rights and interests that cannot be enhanced by leaving the Single Market and Customs Union.

The plebiscite win for the Leave liars last year is not the last word. Parliament must once again be the centre of national debate. In particular, pro-European Tories like Amber Rudd need to encourage ministers like Philip Hammond and others who have serious doubts about Brexit.

A pivotal battle was lost last June and a battle was won on Thursday. But we need to train and find resources for a longer campaign to save Britain for the 21st century by keeping our great country part of the community of EU nations.

Denis MacShane is former UK Minister for Europe under Tony Blair and a contributing editor to The Globalist, where this article first appeared.