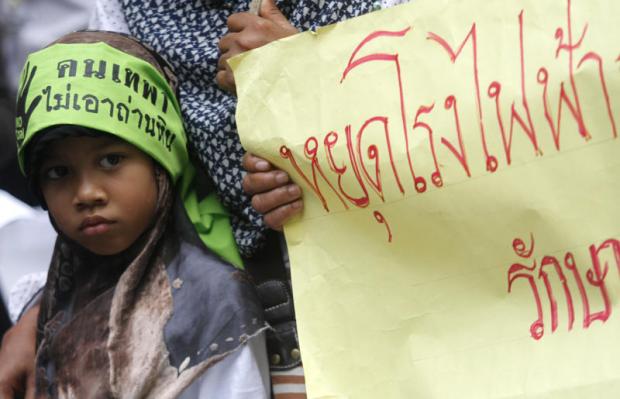 A group of Thai-Muslims from the South submit a complaint to the prime minister in February last year about the potential impacts of the Thepha coal-fired power plant project in Songkhla.  THANARAK KHUNTON

A peaceful sit-in protest against a coal-fired power project by four Thai-Muslims from Songkhla in the South in front of the Ministry of Natural Resources and Environment has drawn attention to the "flaws in state development planning".

In their sit-in, which began on Aug 23, the protesters petitioned the government to review a 2,200-megawatt coal-fired power plant that they say will have an adverse impact on their community in Thepha district of the province.

Their journey from Songkhla to the capital was spurred by the approval of the plant's Environmental and Health Impact Assessment (EHIA) by state environmental experts on 17 Aug. The EHIA will be forwarded to the National Environment Board chaired by the prime minister. Board approval will give the green light for the controversial project to go ahead.

The latest developments with the coal power project have made Thepha people determined to thwart it.

They have called on the government to suspend the project, citing problems in the public hearings process in 2014 and 2015 which they said lacked transparency, did not involve genuine people participation, and hid information about the real dangers of coal.

But the Electricity Generating Authority of Thailand (Egat) denied the allegations. It insisted the public hearings were properly conducted and open to public participation.

Egat has maintained its "clean coal" position, while casting doubt on the capability of renewables as alternative energy.

Under its plan, the Thepha coal-fired power plant will feed growing electricity demand in 14 southern provinces.

According to Egat, the southern region has installed capacity of 3,089 megawatts mainly from local gas power plants, dams and electricity transmission from the central region. Local power plants alone can generate 2,406 megawatts of firm capacity -- the amount of electricity guaranteed to be available at any given time.

But peak demand has surpassed 2,700 megawatts and it has increased rapidly due to growth in many sectors, including tourism. The state has often highlighted this point to justify the need for coal-fired power plants. According to Energy Policy and Planning Office's study, one tourist consumes energy equivalent to what four local people would use. More than 47.5 million Thai and foreign visitors visited the southern provinces in 2016, up from 17 million a decade ago.

In fact, the majority of the southern population depends on the agriculture sector that accounted for 27% of gross regional product in 2014, according to a Bank of Thailand economic report. It is followed by industry (12%), trade (10%), transportation (9%), tourism (8%) and construction and property (7%).

The farm sector is seen as losing its strength in bolstering growth figures, even though 43% of southern jobs are in this sector.

To generate more growth, the state has aggressively promoted tourism, as well as other development projects including deep-sea ports, special economic zones and industrial estates that will require much more power.

So the four protesters, and hundreds more who stayed at home, are categorised as a minority who must remain voiceless -- even though they represent the majority of those in the farm sector. Not to mention the few hundred locals destined to lose their homes as they will be relocated if this project materialises.

Government officials often brand coal protesters as "a minority," or "community outsiders". They paint a bad picture of environmentalists as "NGOs who get money from foreigners to ruin the country's opportunities".

At the same time, they say "more than 90% of local people want coal" and those "few opponents" should "sacrifice for benefit of the nation". Really?

It should be noted that while the authorities stick to the numbers game, none have asked themselves if they, too, are outsiders who should have the privilege of deciding the fate of local communities from their air-conditioned offices in Bangkok. Some have never made a single visit to Thepha.

Instead of focusing on the number of people and economic prospects, we need to ask two questions -- is the power plant project, particular the hearing and EHIA procedure, fair to every stakeholder? Secondly, we need to ask if we really have only one option of burning coal.

To answer the first question, we should look back at past public hearings.

During the third hearing in July 2015, the Songkhla governor issued an emergency order to prohibit anyone with "different opinions" from the hearing venue in Thepa.

Apparently, this order referred to coal protesters. While covering the event, I saw security officials preventing anti-coal signs from being taken to the venue. I encountered a number of participants at the hearing who admitted they knew nothing about it.

None of the officials mentioned the impact coal has on people's health and the environment. Moreover, authorities spent huge amounts promoting coal on various media channels including TV during prime-time slots in order to promote "clean coal" while discrediting the capabilities of renewable energy.

As the world moves toward the clean energy era and low-carbon economy, the Thai state defiantly sticks to dirty coal, and resorts to dirty tactics, giving out one-sided, if not distorted information, to achieve its goals. And forget about those hearings achieving anything.

The Thepha coal-fired power plant project reflects a problem with our system of administration.

Once in a national plan, development projects will be pushed forward despite opposition from locals. In order to "buy" local consent, state agencies involved inject massive amounts of money into local communities in support of schools, temples or activities initiated by local leaders. At times, the targeted communities become divided.

In the documentary An Inconvenient Sequel: Truth to Power, the remarks by Al Gore about the influence of fossil companies over US government decisions can be applied in our case.

"Our democracy has been hacked."

"In order to fix the climate crisis, we need to first fix the government crisis."

So for the second question, yes, we do have other options, apart from coal. Clean energy is the global trend and our decision-makers need to open their minds to it.