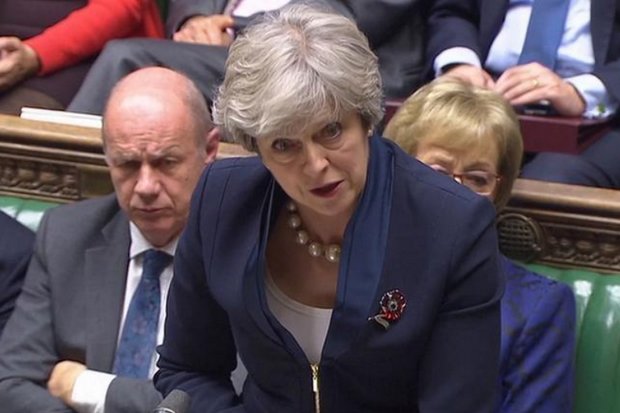 Prime Minister Theresa May, at question time in the House of Commons. Speculation on who could follow May as prime minister is a daily game. (Parliament TV handout via Reuters)

Britain -- ever-ready to boast stable politics and a faultless, often-called "Rolls-Royce" civil service -- is in a mess. Between scandals over sex, secret meetings, political donors and the royal family, the government is melting down.

The country's own newspapers say so. On Thursday, The Times carried the front page headline "Brussels braced for fall of Theresa May's government" -- this before that government has served half a year.

Where British journalism fails to convey the dimensions of the mess, foreign journalists oblige. Steven Erlanger of The New York Times told his Sunday readers in early November that the country is "heading to nowhere, while on deck, fire has broken out and the captain -- poor Theresa May -- is lashed to the mast, without the authority to decide whether to turn to port or to starboard." The Irish writer Fintan O'Toole writes in the New York Review of Books that "Brexit is fuelled by fantasies of 'Empire 2.0', a reconstructed global trading empire in which the old colonies will be reconnected to the mother country."

The first of these, if finely phrased, is overblown; the second is absurd. No one but a real fantasist believes the empire can be reconstituted, or wishes it to be. But schadenfreude is too attractive an emotion to pass up, an occasion to pay back the UK for its haughtiness to other countries it deems less well governed than itself.

The real question here is whether the May government can survive. And what happens if it can't?

The current mess is the result of the workings of democracy, which decreed opening the gates to the barbarians. Barbarians are the forces which mainstream politicians try to keep outside the walls; now, they have forced an entry. In the United States, the invasion is led by Donald Trump: his barbarians are those who take seriously his calls to "drain the swamp" (of Washington) and "put America first".

Britain's barbarians have breached the walls of both major parties. Labour is now led by a group of far leftists, gathered around the figure of Jeremy Corbyn, a man who believes in the socialisation of much of the economy, has supported and praised the Irish Republican Army, Hamas and Hezbollah and favours a call for the former Labour leader, Tony Blair, to be tried for war crimes. Mr Corbyn and his fellow radical members of parliament were barely tolerated by the rest of their parliamentary colleagues, yet when he ran for Labour's leadership in 2015, a sudden swell of support from mainly young party members propelled him, astonished, to the leadership. The barbarians had flooded in; the party's unexpectedly good showing in the general election this summer confirmed they were inside the walls to stay.

The Conservative barbarians are those who hate Britain's membership of the European Union. The parliamentary barbarian group -- a minority -- plagued the leadership: John Major, prime minister from 1991-1997, called them, unaware of an open microphone, "bastards". Their strength forced David Cameron, prime minister from 2010-2016, into the fateful decision to put the issue of EU membership to a referendum. He lost, and so the victorious barbarians inherited the party.

It was not, however, one of their number who became prime minister. That was "poor Theresa May", an unenthusiastic European Union remainder, who won the party leadership over two Brexiteer challengers, but who fully accepted that the people had spoken and Britain's exit from the EU would be pursued.

In that pursuit, a sea of troubles has washed about her, and about the country. Many in her cabinet are not Brexiteers; they believe that exit is folly, and seek to extend the period of leaving the Union in order to give British business and finance more time to prepare for the new conditions. The three cabinet members most concerned with Brexit include Boris Johnson, the unpredictable foreign secretary, who differed sharply with the cautious chancellor, Philip Hammond, a Remainer, on the timetable for leaving. David Davis, the main negotiator with the EU on the terms of Brexit, was called stupid, lazy and "vain as Narcissus" by the former campaign director of the Vote Leave campaign, a supposed ally. The upper reaches of the governing party are murderous.

Negotiations are, in any case, going badly. The EU negotiator, Michel Barnier, has insisted on a rigid timetable which doesn't suit the UK, while issues like the amount the UK must pay before leaving remain an obstacle to progress.

The sea has been made much rougher by a growing sexual harassment scandal that led to the resignation of defence minister Michael Fallon. Damian Green, effectively the deputy prime minister, is fighting allegations of harassment and "extreme pornography" said to have been found on his parliamentary computer.

The scandals multiply, usually displayed at the top of TV bulletins and on front pages. A careless remark by Foreign Secretary Johnson may have prolonged the prison sentence of Nazanin Zaghari-Ratcliffe, the British citizen jailed in Iran on spying charges, by wrongly claiming she had been training journalists there. Lord Ashcroft, a major Conservative donor, was revealed in the "Paradise Papers" leak to have sheltered a large part of his wealth offshore.

He was not alone: both the Queen and Prince Charles were revealed by the leak as having benefited from tax-free shelters. In the same week, International Development Secretary Priti Patel was forced to resign when she was found to have concealed a series of meetings with Israeli ministers. Ms Patel's replacement -- Penny Mordaunt -- had to be, like her, a keen Brexiteer; Ms May does not have the freedom to choose on the basis of competence, only on the basis of alignment.

The prime minister is clearly weak, and has been since nearly losing the election to Labour. The enormity of the task -- of unpicking hundreds of regulations, laws and agreements while forging new trading links, staunching a retreat of the finance sector from the City of London, attracting new and keeping established investment and combating the Scots nationalists who continue to threaten another referendum on independence -- calls for strength and confidence.

Neither is much in evidence. The assumption of weakness is such that speculation on who could follow May as prime minister is a daily game. Most bets are on Michael Gove, the environment secretary and former journalist -- clever, agile and a keen Brexiteer, but inheriting the same gnawing problems with which Ms May has been forced to grapple. Were the Conservatives to lose their thin majority in the House of Commons on a confidence vote, a new election would be ordered -- with the far-left-led Labour Party, on present poll figures, favoured. The country would then be even more deeply divided than before.

This is barbarian rule, otherwise known as democracy. Tens of millions in the democratic world experience insecurity, stagnant incomes or fear of mass immigration -- sometimes all of these. They have chosen to vote for barbarians because the civilised people were not, they thought, caring, or at least not responding. Deeply uncomfortable, even dangerous, as the effects are, the rules by which states which offer political choice live must respect these votes. And hope for civilisation to win, even among the barbarians. - Reuters

John Lloyd co-founded the Reuters Institute for the Study of Journalism at the University of Oxford, where he is senior research fellow.