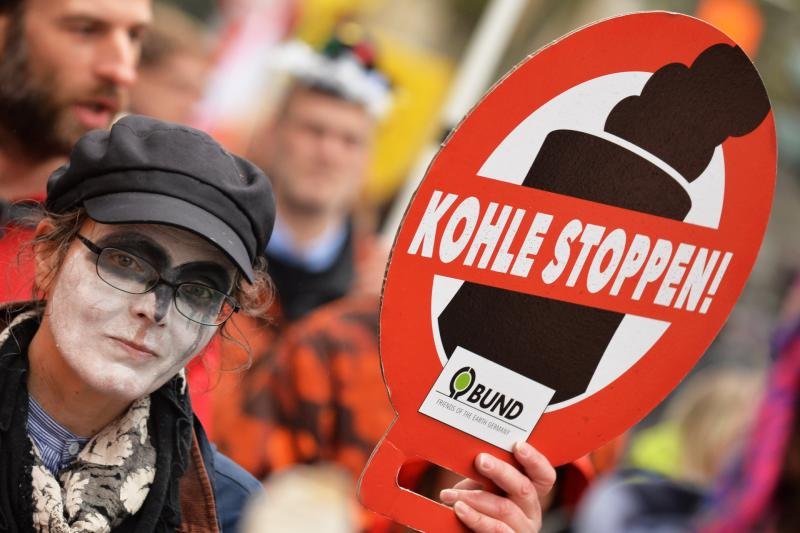 'Stop Coal' is the blunt message of this protester at the COP 23 conference taking place at Bonn. (EPA photo)

The UN Climate Conference in Bonn, Germany represents an important moment for international climate action -- an opportunity to demonstrate continued global momentum towards our collective target of limiting the average global temperature rise to less than 2 degrees, and ideally 1.5 degrees.

For the UK, a world leader in promoting climate change action and delivering clean growth, we want to accelerate efforts to reduce the impacts of climate change and will be announcing further investments in this area during the event, a crucial step following the 2015 Paris Accord.

There is no doubt around the need for urgent action -- with 2017 and the two previous years set to be the hottest on record, melting ice sheets and the loss and damage caused by recent extreme weather events, including in Asia. A recent report estimated that if warming oceans rise as significantly in the coming decades as models project, four out of five of the hundreds of millions affected by floods will be Asian. Many readers will recall the flooding in Bangkok last month, which included my residence and the British Embassy compound on Wireless Road.

But there will be good news stories to share in Bonn too. The pre-eminence of coal -- a very heavy polluter of the atmosphere and a major producer of the greenhouse gases which accelerate climate change -- is now declining, with many viable alternatives that are not only better for the environment (and health) but are also becoming increasingly cheaper. The production cost of solar panels and wind turbines has plunged by 90% in a decade and continues to fall.

In an increasing number of countries (and soon, nearly all), renewables provide the cheapest form of electricity, undercutting even coal. Indeed, two-thirds of all new power that came on line globally last year was from renewable sources. This includes Asia – China's coal imports have likely peaked, and it has mothballed plans for 151 new coal-fired power plants. Coal is increasingly seen as a poor investment, and a number of banks and multilateral agencies have removed it from their portfolios. At the same time, this is a really exciting time for green businesses: As countries deliver on their commitments under the Paris Accord, this global transition will present a huge economic opportunity.

I know the Thai government is reassessing the country's energy mix and will be taking into account the new opportunities provided by renewable energy. I warmly welcome the Ministry of Energy's policy to invest more significantly in renewable energy, increasing the 2036 target from 30% to 40% of the energy mix, and hope that the reassessment might push this ambition even further. Thailand has particular potential for further solar power investment. The London skyline shows tens of thousands of rooftop solar panels operating effectively -- yet sunshine in Bangkok is 38% stronger. Indeed, according to the European Commission's data, Thailand's solar irradiation is almost twice as much as any European country.

I hope that increasing renewables in Thailand's future energy mix may allow reconsideration of the government's current plans to construct another nine coal-fired power plants. Those planned in areas of biodiversity and tourism such as Krabi seem to run particularly against the tide. A decision to move away from coal and more fully embrace renewables would have long-term benefits for Thailand -- for its economy, its environment, its energy security, and the health of its people.

Let me share the UK's experience, which shows how quickly a move away from coal is possible.

Just five years ago coal provided around 40% of the UK's electricity demand. Last year it was only 9%. And last May, the UK enjoyed its first full day without coal generation since the first coal power station was commissioned in 1882. My Prime Minister, Theresa May, has announced the UK government's intention to close all unabated coal-fired power stations in the UK by 2025. We are decarbonising faster than any other G20 country and almost three times faster than the global average (PWC report on 2016 data). Crucially, we have demonstrated that growing the economy while reducing carbon emissions, can, and should, go hand in hand. We want to help other countries do the same.

The UK is one of an increasing number of countries -- including Canada, Finland, France, and Italy -- to have made proposals to end coal generation. Canada and the United Kingdom will champion in Bonn a global alliance on the transition from unabated coal-fired electricity, recognising the need to accelerate the international transition from burning coal to using cleaner power sources. We openly invite others who share our ambition to join us. We hope that our leadership will support other countries, including Thailand, to step up their low carbon transition, and reap the environmental and health benefits -- and yes, economic benefits too.