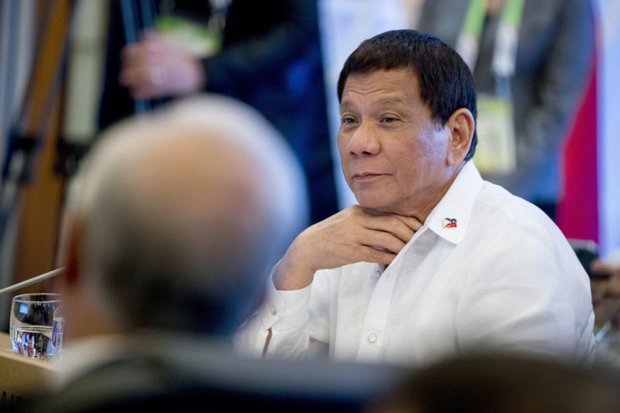 Philippine President Rodrigo Duterte has upended regional diplomacy and his country's ties with major powers. He put Asean on the map on par with the superpowers during the past 429 days to be exact, from Sept 8, 2016 to today. He will pass the baton to Singapore Prime Minister Lee Hsien Loong on Wednesday.

Indeed, Mr Duterte has shifted power politics in the region, by default or design, as no Asean leaders have done before. He did not follow any rules and remained unpredictable throughout his Asean chairmanship. Despite the verdict on the South China Sea conflict by the Permanent Court of Arbitration (PCA) in favour of the Philippines, Mr Duterte decided to play the outcome the way he wanted to -- by befriending China to the bewilderment of his country, allies and friends. In the process, he took the bull by the horns and turned it around to his advantage. Mr Duterte has a lightning rod in his hands, which he can use anytime.

When US President Donald Trump offered to mediate the South China Sea conflict in Hanoi over the weekend before his arrival in Manila, both Vietnam and the Philippines knew the grave danger Mr Trump's style of deal-making would bring.

Kavi Chongkittavorn is a veteran journalist on regional affairs.

For Mr Duterte, it is clear he has no desire to invite the United States back to the great powers' game again. At the moment, the US has already its hands full in dealing with North Korea's nuclear ambitions, thanks to Mr Trump's own doing in highlighting the Korean Peninsula crisis, targeting China for doing too little instead of pointing to China for doing too much in the South China Sea.

The dramatic improvement of Philippine-China ties also has rendered positive impacts on overall Asean-China cooperation over the ongoing negotiations on the code of conduct in the South China Sea. Even though China has rejected the PCA's decision, it would continue to serve as an invisible barometer regarding China's behaviour in regional and international politics. Lest we forget, at the 49th Asean Foreign Ministerial Meeting in Laos in July 2016, hot on the heels of the PCA's judgement, and at the 28th Asean summit in Laos last year, Asean deliberately embedded the full respect for legal and diplomatic process as the norm to conduct ties with China.

Despite Mr Duterte's tough talks, he displayed flexibility. Putting aside his personal grudge against the EU's severe criticism of his anti-drug measures throughout his administration, he was level-headed enough to issue an invitation to EU President Donald Tusk to attend the East Asia Summit (EAS), which is scheduled for today. Obviously, the EU is pleased with the decision as it would pave the long-awaited pathway to join the EAS in the near future. For the past four decades, Asean and the EU have a long history of love-hate relations. Recently, the EU has become more pragmatic and less obtrusive toward Asean especially after key EU members questioned Washington's commitment to Europe's future following Mr Trump's policy pronouncement toward Europe. The recent EU-Japan free trade deal has also prompted Asean to be more accommodating.

Obviously, after six years of hard-line policy during the former Aquino administration, China is now feeling more comfortable about responding to Asean collectively in positive ways without the much-feared perception that it is doing so due to pressure from Washington. Chaired by the Philippines, Asean centrality has been strengthened simply because Mr Duterte decided to opt for cooperation rather than confrontation. The Asean chairman's statement, issued yesterday, on the segment referring to the South China Sea showed that ties are still found wanting. Without tangible progress on the code of conduct in the South China Sea and more strategic trust, their friendship will never return to the good old days of 25 years ago.

Apart from the Philippines, other Asean members are standing firm regarding their relations with the major powers. Thailand, Malaysia, Singapore and Myanmar are good case studies of nations that refused to play into the superpowers' manipulations. It remains to be seen how Singapore's stewardship of the bloc will pan out amid the current security landscape with heightened US-China tension and the EU's desire for more security in the region.

Now, as the Asean Community enters its third year, it will be a region-wide mechanism that will provide a much-needed safety net for millions of migrant workers. Of course, it is still far from perfect. Due to disagreements over the legally binding nature of the protection of workers' rights, for the time being Asean members have agreed that it would be better left to their conscience, a tenet members have adhered to for the past five decades on this issue.

Indeed, it has been an eventful year filled with fun and fanfare -- Filipino style -- for Asean, which is fitting for its 50th anniversary. The Philippines has proved once again the grouping's character and demeanour is still very much hinged on the confidence and intuition of whoever holds the chair.