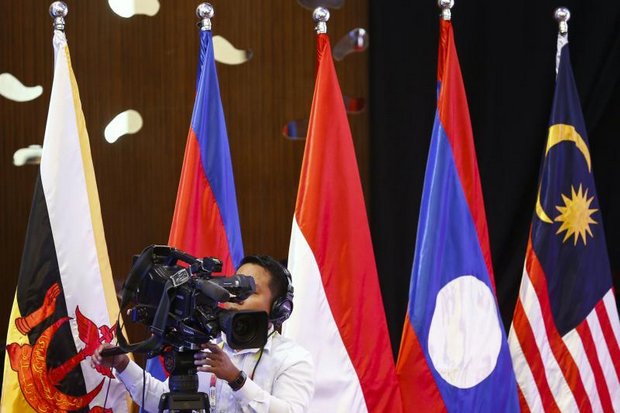 A cameraman operates alongside flags of the Asean countries during a meeting of economic ministers last year in Pasay City, near Manila. (EPA file photo)

China's bullying may be the first of Asean's headaches to come to mind, but its weakest links are those that have been gnawing away at its insides -- and undermining its members' own "Asean-ness".

So while Asean's 50th birthday bash was just a year back, it might as well have been a decade ago. These days, there is talk, among believers and sceptics alike, of Asean being rather rudderless against the backdrop of big powers' rivalry outside it, and lack of Asean leadership, and the mix of authoritarianism, narrow nationalism and populism within its ranks.

Lack of unity, as well, as divergence in policies, are old Asean ailments. But it is the seeming, creeping diminution in recent years of some countries' "investment" in the regional community -- and lack of affinity with the Asean "family" -- that poses the biggest risk to Southeast Asia's regional club.

Shortsighted, having inadequate esprit d'corps, and avoiding discussion of touchy issues were how Asean was described at the August launch in Bangkok of Does Asean Still Matter: A View from Within, a new book by Indonesia's former foreign minister Marty Natalegawa.

"Increasingly, division is taken as a norm, as a new normal," he said, lamenting how Asean has lately been giving up on seeking consensus, the habit that defines it. "My main concern is not only of overt, or open, disunity among Asean, but a sense of drift among Asean countries, where on the surface there is a sense of unity and yet at the same time there is a sense of drift in Asean cooperation," said Mr Natalegawa, foreign minister from 2009 to 2014 under Indonesian President Susilo Bambang Yudyohono.

The list of worrisome symptoms includes the failure to discuss how to manage ties with China, which has split the 10-member group, even in ongoing talks on a Code of Conduct of Parties in the South China Sea. Asean states' split over Myanmar in the international arena has been clear. Add to that Asean's losing the script in the fashionable concept of Indo-Pacific security, which Asean was talking about as early as 2013 or before, Mr Natalegawa said.

These expose Asean's core illness, which analysts say is the failure by member states to situate the regional interest in their domestic interests and connect these two.

Up until the nineties, when Asean had six members, "there was a strong sense that while we all pursue our national interests, the regional interests have to be part of the definition of the national interest", argued Bilahari Kausikan, head of the Middle East Institute at the National University of Singapore and a retired Singaporean diplomat. "That sense has greatly weakened," he said, after the entry of Cambodia, Laos, Myanmar and Vietnam.

"It is a certain amnesia of why Asean was so necessary in the first place, in particular among the newer members. Cambodia stands out among that," Mr Kausikan said. He was referring to how Cambodia, Asean chair in 2012, blocked discussions to mention China's militarisation in the South China Sea in Asean's communique. For the first time ever, Asean failed to issue a joint communique. "The system had shut down", Mr Natalegawa recalled.

Asean's expansion through 1995 to 1999 occurred in a more benign geopolitical space, when China was rising and Southeast Asian nations were more pluralistic. This is in contrast to today's changed dynamics which, when juxtaposed with the diverse region's old differences in politics, ethnicity and religion, add to pressures that can more easily weaken the glue holding Asean together. This affects not just newer Asean members, but the organisation, Mr Kausikan says.

"For most of its life, it was not the Asean-10 countries," said Thitinan Pongsudhirak, head of Thailand's Institute of Security and International Studies. "This is something we overlook."

Scars from the 2012 debacle remain. When Cambodia, as China ally, torpedoed Asean's consensus process, what had been unthinkable -- to abandon Asean's core decision-making mechanism -- became reality and some fear, may be repeated.

Asean's position on Myanmar's handling of the Rohingya crisis also reflects a fraying of its internal links. Not only has Asean disunity been in full display, but it has let the Rohingya issue be defined along the faultlines of religion. For all its timidity, but also due to members' own experiences with communal strife, Asean had studiously avoided the use of religious or the race card in managing ties among members.

In November 2017, Muslim-majority countries Indonesia, Brunei and Malaysia supported a resolution by a United Nations General Assembly committee asking Myanmar to end military operations in Rakhine state. Singapore and Thailand abstained and other Asean members voted against, exposing what Mr Natalegawa called Asean's "perfect disharmony". "That is a very, very regrettable situation because we went through the Myanmar portfolio through thick and thin. Somehow we managed to maintain our unity. Now the genie is out of the bottle."

Along with criticism of Asean's tepid role in the Rohingya crisis are questions about where Myanmar -- unable to totally unlearn habits from decades of isolation and distrust of the outside world -- sees itself in its regional family. Asean stuck its neck out to admit Myanmar, and Asean likes to say that the safe perch it gave Myanmar helped make political change possible.

Asean's humanitarian agency has brought supplies into Rakhine and Myanmar hosted a foreign ministers' retreat in 2016, but more signs of Myanmar's affinity with Asean may not be too easy to cite at present.

"Asean leaders go to Bangladesh, to Cox's Bazaar, to be able to witness and see the sufferings [of Rohingya refugees], but they are not even welcome in Myanmar itself, a fellow Asean-caring-and-sharing type of dynamics, supposedly," Mr Natalegawa said. "So, something is not quite right."

While having a single negotiating draft shows some movement in talks between Asean and China on the South China Sea code of conduct, it reveals how Asean still does not speak with one voice to Beijing.

"There is not an Asean 'one' and China, but there are individual Asean states and China, which to me is a bit telling on where we are in the region," Mr Natalegawa said. "The Code of Conduct is an 11-country negotiation, not an Asean-plus negotiation," Malcom Cook of the ISEAS-Yusof Ishak Institute said at another discussion.

To this day, Asean has not referred in any of its documents to the 2016 ruling by The Hague-based Permanent Court of Arbitration, which had declared invalid China's Nine-Dash line in a lawsuit filed by the Philippines.

Clues that Asean tends to give up too easily on consensus lie in how Asean communiques have changed to include per-country views and now total more than 30 pages and 200 clauses in length. Mr Natalegawa said, "You have 'some ministers express concern', 'some ministers welcome' -- it's like a snapshot of the dynamics rather than a collective view."

Questions about how an Asean whose members are not on the same page can manage ties, and how much stake Cambodia, Myanmar and Laos have in it two decades after their admission, have slowed the organisation's interest in expansion at this time.

Mr Natalegawa agrees that consensus is harder among more countries, but says that for Asean to have left Cambodia, Laos, Myanmar and Vietnam out of its circle would have kept the geopolitical divisions of old. "At least now the divisions are obvious and real, but they are being manifested within a common Asean 10, and it is the job of foreign ministers and officials to try to forge consensus."

Indonesia is still seen as Asean's leader, though President Joko Widodo has been faulted for being disinterested in Asean. Traditionally, Mr Kausikan says, Asean takes action after at least three among its founding members, usually Malaysia, Indonesia and Singapore, give the go-signal. But it is now harder to get countries engaged enough for Asean to take action, he says.

While Mahathir Mohamad's comeback as Malaysia's prime minister has revived hope for a more assertive Asean, the 92-year-old leader has his hands full with domestic issues. "There is a yearning for the days of Dr Mahathir, Lee Kwan Yew, that generation of the eighties, nineties that propelled Asean to certain directions. Critical mass is key, but even now, critical mass is different," Mr Thitinan said. "In this case, I think even Dr Mahathir may not be enough."

"What I fear now is there is even a sense of denial, as if all is well," Mr Natalegawa said.

Diplomatic waters have been calmer in this year's meetings hosted by Asean chair Singapore, which managed the regional narrative and a two-paragraph discussion of the South China Sea in Asean's communique.

Asean's demise has been mistakenly foretold many times before. But being immobilised as centrifugal pressures weaken its core may push it to irrelevance, if not implosion. Mr Thitinan said: "This is the time that Asean needs Asean."

Johanna Son, who has followed regional affairs for three decades, is Bangkok-based editor/founder of the Reporting Asean media programme.