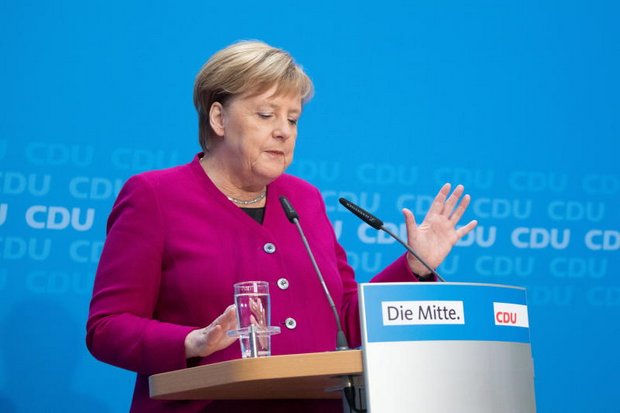 German leader Angela Merkel announced she will step down as party leader in December but will remain as chancellor until 2021. (EPA photo)

I have warned repeatedly against writing off German Chancellor Angela Merkel as she faced challenge after challenge in recent years. I'm going to issue another such warning now, even though it might seem counter-intuitive given her announcement on Monday that she will give up the leadership of her Christian Democratic Union (CDU) in December and not run for a parliamentary seat in 2021.

Those decisions make Ms Merkel a lame duck. They also make it more obvious than ever that she risks ending her final term as chancellor before 2021. Her predecessor, Gerhard Schroeder, stepped down as leader of the Social Democratic Party (SDP) in 2004 while staying on as chancellor. Ms Merkel has long said she didn't want to follow his example, perhaps because he lost his post to her in a snap election in 2005.

And yet Ms Merkel said on Monday that she'd decided over the summer to quit the party post without giving up the chancellorship because the circumstances were right. She didn't explain her reasoning, but it's worthwhile to try to reconstruct it. It's possible that Ms Merkel, a risk-taker despite her reputation for stolid caution, wants to be a lame duck whose wings haven't been clipped.

It's often been noted that despite her political longevity, she hasn't really secured a positive legacy because her most important and successful policy decisions were rarely of her own initiative. She went along with the Greens' vision of Energiewende, Germany's transition to sustainable energy; she bowed to leftist parties' momentum on marriage equality; the introduction of a minimum wage was a concession to the Social Democrats; the legislation requiring a balanced budget was the idea of Wolfgang Schaeuble, a patriarch of her party who is currently parliament speaker. Ms Merkel has always been good at working within political constraints. "I'm somebody who can work with many, many people," she said on Monday. "I'm known for that."

A politician with that kind of history might be tempted to work for a few years without being constrained by horse-trading and intraparty politics. Ms Merkel unbound could surprise Germany and the world. After all, no one else can take credit for her riskier, more controversial decisions, such as phasing out nuclear energy after the Fukushima disaster or letting in 1.2 million asylum seekers in 2015 and 2016.

Instead of trying to smooth things out within the CDU or with its conservative Bavarian sister party, the Christian Social Union, Ms Merkel the lame duck can move faster and more decisively on the European Union's post-Brexit consolidation, including a common immigration agenda and a tighter financial union; on conflict resolution in Syria, Ukraine and the Balkans; on building up the EU as a sober counterweight to President Donald Trump's US; and on domestic infrastructure investment and fixing the pension system.

That the coalition government she leads includes the SPD, which has been doing horribly in the polls, may give her a chance to leave her mark. Pulling out of the coalition and forcing an early election appears suicidal for that party; on the other hand, Ms Merkel's positions on the EU and important domestic issues are close to those of SPD leaders, and working with the chancellor after she stops looking over her shoulder to her party base could be to the Social Democrats' advantage. This could be why Andrea Nahles, the SPD leader, went out of her way to praise Ms Merkel on Monday, saying she was glad the "hidden conflicts" within the conservative camp were in the open now.

Ms Merkel has a stake in how those conflicts pan out. She could face a rebellion in the CDU's parliamentary faction if the next party leader is a critic such as Health Minister Jens Spahn or former CDU faction head Friedrich Merz. An uprising could force her to resign as chancellor before her term runs out.

If a Merkel ally such as Annegret Kramp-Karrenbauer, now CDU general secretary, wins the top party job, the chancellor would be free to pursue her goals while insulating the new party leader from risky decisions.

This scenario may be overly optimistic. Ms Merkel could be so worn out by her recent battles that she'll take no risks and give her allies time to score some political points for the next election. She could also be ousted quickly if her political adversaries force the CDU to the right.

Ms Merkel is taking a gamble in trying to serve until 2021 but it's a mistake to write her off. She may not be allowed a last run, or last word, but no one will be able to blame her for not having tried. - BLOOMBERG OPINION