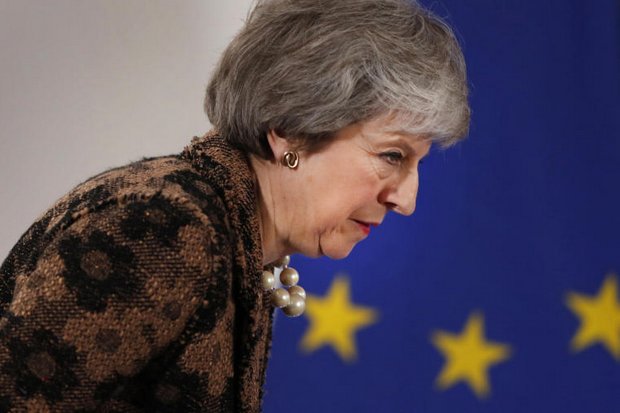 British Prime Minister Theresa May arrives for a media conference at an EU summit in Brussels on Friday. (AP photo)

Now is the time for all good citizens to put their elected politicians on the rack. Torture is what tyrants visited -- and, often, still visit -- upon real or presumed enemies among their own people. But subjecting their leaders to prolonged public humiliation has come to be a default position among democracies. None knows this better than the United Kingdom's Prime Minister, Theresa May.

The rack was an invention popular in Europe among rulers and their enforcers, in use from antiquity to the 18th century. It stretched the victim's limbs, causing excruciating pain and at an extreme dislocated or even tore them from the body. Its use was declared illegal in Britain in the early 17th century but it is now being practised (in a non-physical form) on the British prime minister as competing factions in her own party seek to stretch her this way and that. Now the stretching is exerted by the ardent Brexiteers, including some in her own cabinet, who wish to crash out of the European Union even with no deal, now by the Remainers who wish her to craft a Brexit as near as possible to the position the UK enjoyed when a member.

It's of little comfort, I guess, though it is now the case, that other leaders have their own experience of being intolerably stretched. French President Emmanuel Macron has probably seen off the worst of France's recent street violence though not, more lastingly, the economic costs that the gilets jaunes (yellow vests) loosed on France during their protests against fuel prices. But the reduction of his authority was manifest in his repentant speech televised earlier this week, in which he both accepted his "share of responsibility" and that he had "hurt some of you" -- and announced a substantial rise in the minimum wage, among other aids to the "left behinds" of a France once apparently entranced by him, now apparently disgusted. He remains stretched between his plan to decrease French carbon emissions and reduce the budget deficit by trying to make fuel more expensive -- and the need to placate the still-seething masses.

Angela Merkel is still chancellor of Germany and has seen her preferred successor, Annegret Kramp-Karrenbauer, backed by a majority of the ruling Christian Democratic Union. But Ms Merkel has lost both popularity and power, has seen her party split on right-liberal lines and is in no shape for major initiatives at home or abroad. The European Union, which she and Mr Macron were united in strengthening, now drifts.

Earlier victims of public torture, who suffered much and are now all but forgotten -- including Matteo Renzi, Italy's former prime minister and leader of the centre-left, and Mariano Rajoy, former prime minister of Spain. Both lost office -- the first in an election in March which saw two populist parties take over government, the second losing a no confidence vote in June in the Spanish parliament, leaving a fragile minority government to limp on. Europe is now shorn of strong leaders.

None, though, has been so stretched as the British prime minister. Her enemies on the Brexit side forced a party vote of confidence on her on Wednesday evening. She won, with 200 parliamentarians supporting her, but with 117 against -- a "significant" number, as she acknowledged. She then set off for Brussels, yet again, to plead for more concessions to allow her to get her Brexit plan through parliament -- a challenge she baulked at this past week, knowing it would fail. Her plea to her fellow leaders fell on deaf ears. There is a faint hope of further clarifications, but it appears that the EU's firm position is no more negotiations. A "no-deal" Brexit, widely seen as a disaster, is now clearly possible – even likely.

The Remainers, though in some disarray, believe the country is swinging their way and, according to some polls, Britain would vote to stay in the EU in a second referendum. On Wednesday, I attended a lecture, organised by the British Academy, where the most passionate Remainer, Andrew Adonis, a Labour peer and head of policy for former Prime Minister Tony Blair, lambasted his fellow politicians, the press and even British citizens for their lack of enthusiasm for the EU -- comparing this deficit of zeal with the steady approval Americans have in their democracy, the iconic figures such as Abraham Lincoln and the founders of the republic. He was opposed by the writer and academic Timothy Garton Ash, who though a Europhile, believes skepticism on the Union's democratic credentials and efficacy is necessary to make a convincing case to an already skeptical electorate.

It seems to me that Mr Garton Ash is right. The British, especially the English political temper, simply cannot rise to an enthusiastic, Macron-style embrace of the EU. The most Britons would tolerate would be the continuation of a relationship which allowed opt-outs of membership of the euro, the Schengen no-passport zone and much else. Nor is the UK the exception which it is often assumed to be. The triumph of the Italian populists in March this year showed that a state once thought to be the most enthusiastic in Europe for the Union suddenly swung Euroskeptic -- proof that the EU had been embraced by the political, intellectual and much of the middle class, but had not gripped the imagination of the majority.

But it is Ms May who continues to be stretched by the extremes of Britain's two camps, and who cannot craft a compromise which could receive a majority in the Commons. She attracts praise for her stamina and courage, even from a few opponents. But most, along with the news media, simply criticise her as they watch the torture. It's inevitable. For most of the British, the membership of a Union still pledged to the ultimate goal of a federal state of Europe -- one many European politicians want -- is unattractive. Some argue it's too soon or simply impractical to create such a state, and the more passionate argue it would be a kind of tyranny.

Theresa May took UK politics' top job after the long-running division on the EU, suppressed for decades, found an outlet through the 2016 referendum. The citizens spoke, then said to the politicians: do something! Get us out! She and her party were left with the task of unpicking 45 years of laws, regulations and habits, while trying to keep the country together and get a deal through parliament. It has so far proven a task too heavy. And so the racking must continue till she, and perhaps her party, are torn limb from political limb. - REUTERS