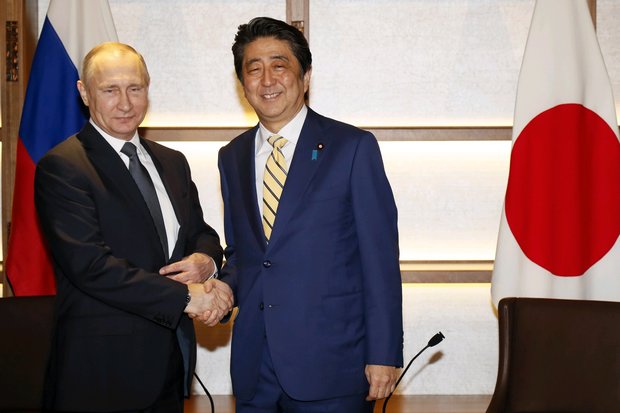 The window of opportunity for Russia and Japan to officially end World War II with a peace treaty narrowed again after Prime Minister Shinzo Abe's visit to Moscow on Tuesday failed to end in a breakthrough. There's still time for Mr Abe to secure his legacy, but a lot depends on President Vladimir Putin's increasingly shaky domestic standing.

As I wrote when Mr Putin and Mr Abe met in November, both leaders need a deal more than ever. For Mr Abe, an end to the dispute with Russia over islands the Soviet Union seized from Japan at the end of World War II would be the big win he needs to serve out his term and become Japan's longest-serving prime minister, while potentially driving a wedge between Russia and China, which together present the biggest threat to Japan's security.

For Mr Putin, an agreement with Japan would be both strategically and tactically beneficial. The development of Russia's vast Far East is one of the president's strategic priorities, and he hopes to get Japan's help to counterbalance China's growing role in the region. Mr Putin appears to be out of productive foreign policy ideas, and forging a closer relationship with Japan would offer some exciting opportunities. Negotiating a peace treaty that would include non-aggression guarantees would undermine US-Japanese military cooperation, and could undercut US attempts to isolate Russia economically.

These motivations are still there, but the moment appears to have passed, at least temporarily. Mr Putin is, somewhat unexpectedly, living through one of the worst moments of his presidential career. Russia's economic growth has stalled and there are no obvious ways to restart. Last year, capital outflow from Russia reached US$67.5 billion, the central bank reported last week. That's almost three times as much as in 2017 and the most since 2014, the year of the Crimea annexation and a catastrophic drop in oil prices.

Mr Putin has scored few foreign policy achievements lately, and the messages on Ukraine and the Middle East churned by the powerful domestic propaganda machine attract less interest than before. Both main state-owned TV channels lost viewership share in 2018. Instead, Russians rely more on internet, and often on the gloomy rumours spread on the social networks. A recent, particularly persistent one maintains that what the authorities described as a gas explosion in the steel-mill city of Magnitogorsk, in which 39 people died, was actually a terrorist attack followed by a cover-up.

Accordingly, Mr Putin's popularity keeps going down. A January poll by VCIOM, a polling agency loyal to the Kremlin, showed that only 33.4% of Russians have confidence in Mr Putin. That's the lowest level since 2006; as Mr Putin was re-enthroned in a tightly controlled "election" in March, VCIOM reported a confidence level above 57%.

The last thing Mr Putin needs now is the instability that would be fostered by a deal with Japan that requires Russia to surrender territory. Mr Putin and Mr Abe have discussed going back to the terms of a joint declaration signed in 1956, in which the Soviets agreed to hand over to Japan the islands of Shikotan and the Habomai islets. Japan wants two more -- Etorofu and Kunashiri -- but Mr Abe has signaled his willingness to sign off on the 1956 terms. In Russia, however, the handover of any land is highly unpopular: according to a poll by Levada Center, the country's last remaining big independent pollster, 74% of Russians are against letting Japan have any of the islands.

Mr Putin could still do the deal, but he'd need a more popular event to offset it. The Kremlin has been pushing for a closer union with Belarus that would essentially create a single state of the two countries, with a single currency, justice system and other attributes of statehood. But Belarussian President Alexander Lukashenko has stubbornly resisted these plans (which are unpopular in his country) and signalled he'd weaken the alliance with Russia and seek help in the West if pressure continued to mount.

This is simply not the moment for Mr Putin to cede anything to Mr Abe. So earlier this month, Russian Foreign Minister Sergei Lavrov said after meeting with his Japanese counterpart that Japan would need to recognise Russian sovereignty over the disputed islands as a precondition of peace. This is unacceptable to Mr Abe, but Russia has never promised to hand over the islands, preferring to discuss all sorts of compromise arrangements.

The lack of quick progress doesn't necessarily mean a return to the dead end that all previous talks have hit. Both sides still need a deal. They'll keep working on it and waiting for a more opportune moment. Mr Putin's fading domestic political magic, however, makes it doubtful that he can create it in time for Mr Abe to claim the win he craves. - BLOOMBERG OPINION