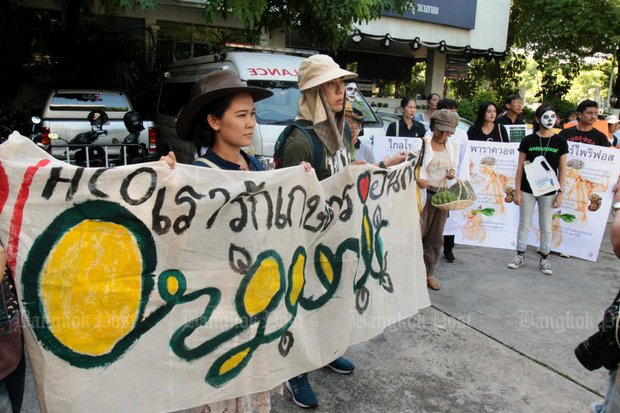 In September of 2017, consumer rights' advocates marched to the government's complaint centre to lodge a petition with Prime Minister Prayut Chan-o-cha, urging him to order the Department of Agriculture to ban paraquat and chlorpyrifos. (File photo by Tawatchai Kemgumnerd)

The National Committee on Hazardous Substances' recent decision not to ban the use of paraquat -- a herbicide widely used in the sugarcane, tapioca, rubber, fruit and vegetable production -- has sparked protests from farmers and civil society organisations.

The interests of this decision have been questioned, given the dubious claims that no other herbicides work as effectively. As one of the top five users of paraquat in the world, Thailand doubled its imports from 2017 to 2018. Yet 53 other countries have already banned the substance to protect consumers and producers from the adverse effects and academics are stressing its detrimental health impacts, pointing towards issues of increased risk of Parkinson's Disease, cancer and reproductive health challenges.

Women are especially vulnerable to chemical exposure due to the disruption caused in hormone systems, especially during adolescence, pregnancy, lactation and menopause. A study further found a slight increase in the risk of breast cancer for women whose husbands apply paraquat. The use of paraquat also has serious implications for the foetus and child development, for instance due to impairment of motor coordination.

This is especially true for rural women that are more at risk, not only through direct exposure when applying paraquat, but also indirectly by living in areas where the herbicide is used or with family members using the substance. In these areas, frequent health effects include eye injury, nosebleeds, and skin irritation, and long-term exposure to even low doses can have severe consequences for the lungs, hormones, nervous system, and the brain.

However, there are significant knowledge gaps on exposure routes and impacts on women due to the lack of sex-disaggregated data. Within pesticide and herbicide use such as paraquat in Thailand, gender-differentiated impacts may be overlooked as societal structures have long viewed men as the primary farmers and users of chemicals. As a result, men are often perceived as more at risk and exposure standards are often based on an average male individual, reducing their ability to protect women and children. In general, men's activities in agriculture have received much more development support such as mechanised technologies in land preparation, integrated pest management and harvesting technologies with less attention paid to women's activities such as weeding, threshing and milling.

Women in Thailand are widely engaged in agricultural production, and often take charge of weeding and applying herbicides. Therefore, women are tasked with ensuring that killer weeds do not disrupt growth of cash crops as this will spell the loss of farm income. While the development of herbicides has eased the physical burden of women from back-breaking weeding routines, women are increasingly exposed to herbicides like paraquat that may have detrimental effects on their health and longevity. This requires training, yet women are often less likely to be recipients of formal extension services while higher rates of illiteracy make it difficult for women to read the herbicide labels. As such, women have been found to lack sufficient knowledge of the health impacts of using paraquat during pregnancy.

Overall, while a ban on paraquat will affect women's health positively, some groups of farmers have petitioned against such a ban due to fears of production losses, and possibly not knowing the adverse health effects on women farmers. In cases where it leads to production losses, a ban may also disproportionately affect women due to their responsibility for ensuring household food security and well-being in times of scarcity. Therefore, it is crucial that a ban goes hand in hand with training in organic approaches -- for both women and men.

We need to work to break down societal barriers and power dynamics that prevent women from realising their rights in the agricultural sector, and control over their bodies. This includes ensuring women and women's groups are more engaged in decision-making around chemical management at both household and policy level, that currently is male-dominated.